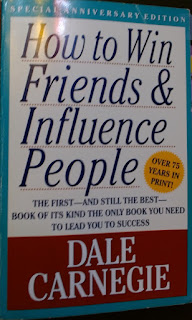 “Criticism is futile because it puts a person on the defensive and usually makes him strive to justify himself.  Criticism is dangerous, because it wounds a person’s precious pride, hurts his sense of importance, and arouses resentment.” – Dale Carnegie, Page 5

Communication and people management skills are need regularly by everyone.  Knowing how to appropriately interact with other people, can help get what the individual wants.  Other people want the same as the individual, to consider and obtain their own wants.  By becoming interested in what others wants, they become interest in the individual.  Making the focus not on personal accomplishments and wants, but the wants of others.  Genuine interest in other individual’s values.  Providing others with sincere appreciation for their values.  Coercive dominance tactics can make people do what someone else wants, but these tactics have undesirable repercussions.  The only way to get anyone to do anything, is to make them want to do it.  Only by giving what the other individual’s want, can the individual get anything.

The best arguments are those that are avoided.  Better not argue with those who the individual needs.  Better not to tell them if they are wrong.  Show respect for other individual’s views.

Disagreement should be welcomed, for they help discover errors and provide the opportunity to correct the error before more serious problems arise.  Admitting one’s own errors, makes others less defensive.  Make sure to listen, and build bridges of understanding rather than putting up barriers of misunderstanding.  Acknowledging errors accomplishes more than trying to defend them.  Even within disagreements there are can be areas of agreement.  Claim to consider the claims of the opposition, and actually consider them.  Their claims can have information that is needed for one’s own claims.   Provide space to consider the different sides, before taking any action.  Need to manage one’s own emotions, and avoid trusting first impressions.

The book is full of examples and stories, but does lack systematic explanations of the content.  Many ideas presented are intuitive claims, that many fail to adhere to.  What the examples and ideas do, is facilitate reflection about one’s own behavior, and how that behavior can be adjusted to improve interactions with others.

The focus of the book is about creating supportive relationships, by establishing behaviors that coordinate expectations.  The examples provided have a survivorship bias, for the examples are only discussed when the ideas have worked.  Not mentioning the various ways in which the same ideas have failed.  Knowing what conditions and contexts are needed for the ideas to succeed or fail, would have provided an understanding on what to facilitate and avoid.

Many of the ideas in the book have become very popular, but also overused.  They had a loss of meaning due to their misuse.  The consequences of the ideas have changed due to changing cultural features.

Although the author recognizes the value of disagreements, but the claim given is to avoid them.  Ignoring problems does not make them go away.  People learn through error correction, but the ideas given are to avoid giving anyone anything but positive feedback.  The messenger of the problems might not feel they are being heard if their claims are ignored, thereby contradicting the supportive relationships that the author wants to build.

Being supportive can have consequences, which are not shared in the book.  The behaviors and ideas in this book appear to be beneficial, and without trade-offs.  They can make the individual sacrifice for others, without any reciprocation.  Also, being supportive of a given individual’s values, can create disagreements with other peoples’ values.

Questions to Consider while Reading the Book
•What is the raison d’etre of the book?  For what purpose did the author write the book?  Why do people read this book?
•What are some limitations of the book?
•To whom would you suggest this book?
•When are communication and people management skills needed?
•How to make friends?
•How to influence people?
•What do other people want?
•Can coercive dominance work?
•How get anything that someone wants?
•How are people motivated?
•What impact dos criticism have?
•How to have a conversation?
•How to have a disagreement?
•How do individuals learn?
•What does a smile do?
•How to divide credit of an idea?
Book Details
Publisher:         Gallery Books [Simon & Schuster]
Edition ISBN:  9780671027032
Pages to read:   264
Publication:     1998
1st Edition:      1936
Format:            Paperback
Ratings out of 5:
Readability    3
Content          3
Overall           2