Review of The Sovereignty Wars: Reconciling America with the World by Stewart Patrick

Book can be found in:
Genre = Politics
Book Club Event = Book List (04/08/2023)
Intriguing Connections = 1) To Cooperate Or To Defect?,
2) Why Conflict Occurs And How To Resolve Them? 3) Why Do People Think Differently?,
4) Get To Know This Worlds' People, Regions, Cities, Nations, and Empires (United States of America) 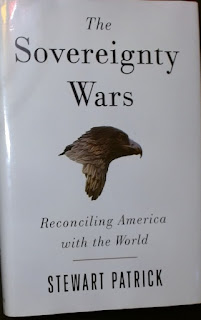 “The three core dimensions of sovereignty are authority, autonomy, and influence.  Authority refers to the state’s exclusive and legitimate right to make rules.  Autonomy refers to its ability to make and implement decisions independently.  Influence refers to the state’s effective capacity to advance its interests.” – Stewart Patrick, Chapter 1: Introduction, Page 12

“While such trade-offs can be real, their gravity is often exaggerated.  Too great a defensiveness against any perceived losses of U.S. sovereignty-as-autonomy or U.S. sovereignty-as-authority can be counterproductive if it deprives the Unites States of the opportunity to exercise its sovereignty-as-influence – that is, to shape its destiny in a global era.” – Stewart Patrick, Chapter 1: Introduction, Page 13

“Sovereignty brought welcome order to Europe.  Beyond ending the wars of religion, it allowed the emergence of a stable “society if states” whose members recognized each other’s legitimate rights and (increasingly) resolved differences through diplomacy and international law.  Sovereignty did not eliminate war.  But it reduced its frequency and ferocity by narrowing its causes and moderating its conduct.” – Stewart Patrick, Chapter 2: There’s No Place Like Home, Page 33

States can advance their interests and values through international institutions and treaty obligations, or through state efforts and more flexible cooperative arrangements.  It can be desirable to voluntary trade an aspect of sovereignty for another aspect because of the superior benefits.  Defending an aspect of sovereignty can be very counterproductive.  Governments have been making trade-offs between the sovereignty aspects.  International obligations would require trading off autonomy, the freedom of action, for influence, the benefits of cooperation.  Many global issues cannot be resolved with just state efforts.  Changing and trading sovereignty enables for more effective use of sovereignty, and facilitates adjustments to different contexts.

The Act of Sovereignty:

Recognition of state sovereignty changed how political agents interact with each other.  Credit for the sovereignty movement usually goes to the Peace of Westphalia of 1648.  Before sovereignty, personal bonds defined political relations, and a complex system of overlapping authorities and jurisdictions.  Sovereignty brought order to Europe, ended various wars, and enabled conflict to be resolved through diplomacy and international law.  What sovereignty did was legitimate the rights of state relative to other states.  As other states recognized each other’s legitimacy.  Bringing about a stable society of states.

Sovereignty has 5 characteristics which are: 1) Supreme political authority within a given territory, which includes the only accepted use of armed force.   2) International legal recognition, as the states mutually recognize their political independence.  3)  Autonomy in policy choices without external intervention.  4) Interdependence influence such as controlling cross-border flows.  5) Rule by consent of the governed, as people have delegated some of their power to chosen agents.

Sovereign authority is malleable, as authority can be aggregated by states, and shared through international administration.  Authority is not absolute and unitary.  Authority claims are not fixed, but evolve with state functions.  To protect sovereignty, a state can optout of participating in treaties, or gain special privileges.

Transnational threats require international cooperation, but America takes a narrow self-interested posture.  United States has been a global leader since WW2, but has relegated the responsibility.  U.S. had a large role in the development of international cooperation, but also very defensive about its sovereignty.  Using international law to make others behave more predictably, with appropriate enforcement, but resists subjecting themselves to the same constraints.  A hypocrisy that makes Americans within the U.S. be seen as benevolent, while seen by foreigners with skepticism.

America needs to figure out a balance between independence and cooperation.  To consider what commitments, and constraints it is willing to accept for a more rule-bound international order.  What is needed to is understand how to shape America internally, while advancing interests globally.

As sovereignty has three dimensions, for the U.S. this means difficult trade-offs between defending the U.S. constitution, protecting U.S. freedom of action, and having control over outcomes.  Historically, there were times that the U.S. has exercised restraint which facilitated security and economic stability, which also helped legitimize its own power and leadership.  The U.S. has historically integrated itself international systems of rules for its own interest.  America has gained special privileges within international rules to keep their sovereignty.

The book references many U.S. politically sensitive issues, which can make it hard to read parts of the book given the reader’s prior thoughts about the issues.  As the author recognizes the sensitivity of the issues, some claims are counterproductive such as seeming readiness to dismiss claims that others find legitimate.  The dismissal of certain views can make the reader defensive.

U.S. history is generally well represented, but world history seems to be lacking.  Prioritizing sovereignty aspects and what they have enabled.  But the features were available before sovereignty as well.  The source of sovereignty might have enabled further promotion of legitimacy and negotiation ability, but those tactics have existed much earlier.