Review of Seeking Wisdom: From Darwin To Munger by Peter Bevelin

Book can be found in:
Genre = Philosophy, Epistemology
Book Club Event = Book List (11/26/2022)
Intriguing Connections = 1) How to Teach? How to Learn?,
2) Ways To Help Oneself and Life Lessons, 3) Why Do People Think Differently?,
4) How To and Not To Run a Business, 5) Why Conflict Occurs And How To Resolve Them?,
6) The Evolution of Evolution 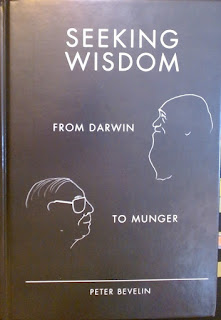 “It is our brain, its anatomy, physiology and biochemistry and how these parts function that set the limits for how we think.” – Peter Bevelin, Part One: Chapter One: Our anatomy sets the limits for our behavior, Page 4

“Failure to detect threats is often more costly than false alarms.  Our ancestors learned through trial and error that in the log run, pain could be avoided if they were fearful.  They survived the dangers because they learned how to respond.” – Peter Bevelin, Part One: Chapter Three: Adaptive behavior for survival and reproduction, Page 24

Email ThisBlogThis!Share to TwitterShare to FacebookShare to Pinterest
Labels: Philosophy-Epistemology

Review of Inventing the Enemy by Umberto Eco

Book can be found in:
Genre = Sociology
Book Club Event = Book List (03/11/2023)
Intriguing Connections = 1) Why Conflict Occurs And How To Resolve Them?,
2) Why Do People Think Differently? 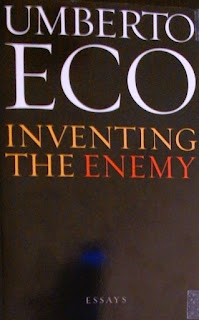 “Having an enemy is important not only to define our identity but also to provide us with an obstacle against which to measure our system of values and, in seeking to overcome it, to demonstrate our own worth.  So when there is no enemy, we have to invent one” – Umberto Eco, Inventing the Enemy, Page 2

“No one could seriously include Einstein’s theory of relativity under the label o relativism.  To say that a measurement depends on the conditions of movement of the observer is regarded as a valid principle for every human being in every time ad place.” – Umberto Eco, Absolute and Relative, Page 33

“Of all the elements it is the one most liable to be forgotten.  We breathe air all the time, we use water every day, we continually tread the earth, but our experience of fire is in danger of gradually diminishing.  The role once played by fire has slowly been taken over by invisible forms of energy.” – Umberto Eco, The Beauty of the Flame, Page 44

The essays are united in their randomness.  Provoking curiosity in a variety of topics, that otherwise might not have been provoked.  Encouraging reflection on otherwise ignored topics.  Each topic has ideas in contrast with others, as ideas identify their value in contrast to other ideas.  By being challenged in the presence of opposition, can the errors of the ideas be identified.  By overcoming the errors, do ideas become better.

To learn about contradictions within the ideas requires individuals to be willing to learn information that is not yet believed.  To interact and acknowledge the differences.  To try and understand the complexity of information rather than just the stereotypes.  Conflicts arise when being challenged, but to overcome the conflict would require communication.  Communication depends on listening, and having silence to hear others.  But the ubiquitous constant distractions prevent silence that is needed for communication.

An enemy provides a contrast to one’s own values, which define an identity.  Enemies behave differently, and have different values.  An enemy provides a challenge to values, in which not only do the values becomes measured but also demonstrate their worth in overcoming the challenge.  As the identity is built in the presence of others, differences are found even if they do not matter.  Enemies are invented even when there are no enemies.  Although others are needed, they are also in some way intolerable because of their differences.  Turning the other into an enemy creates conflict that can lead to self-destruction.

Threats to one’s own values are the real threat.  What becomes threatening is the differences between one’s values and the oppositions values.  The different sides view the other as a homogenized group, and obtain negative characteristics.  The opposition becomes evil and characterized by negative attributes such as ugliness.  Alternatively, everyone identified as supporters become defined as good and have positive attributes such as beauty.  Civilization seems to depend on having enemies.  If not a human object, then the threat comes from nature or social force that needs to be defeated.

When dealing with the enemy, morality facilitates an understanding of the enemy, rather than pretending that there are no enemies.  An even greater challenge than the challenge posed by the enemy, is to understand other people in their complexity rather than by stereotype.  Complexity that acknowledges and interacts with the differences.  Normal behavior tends to simplify the opposition into a homogenous caricature, while seeing supporters are complex.

War depends on having an enemy.  There are those who claim there are benefits to war, as there are features of war that facilitate a harmonious human society.  War enables effective governance, and reduces supply pressures.  Nations develop their identity through war, and the legitimacy of its governance.  Creates an equilibrium between classes.  Provides a validating reason for exploiting antisocial elements of society, and direct delinquents to effective behavior.

That which does not depend on something else is usually referred to being absolute.  The absolute has motivations and reasons without external influence.  While cognitive relativism sees objects as being determined by human faculties.  Which creates an interesting irony as the theory of relativity would not be labeled under relativism because motion would be valid for everyone in every time and place.  Without absolutes, there are only interpretations.  Which would also require interpretations of interpretations, but cycle of interpretation would require something to begin the process.

The essays have varying qualities.  The essays have very little connection to each other and are random curiosities.  Curiosities that can inspire further consideration of the topic, but that would depend on the reader’s interests.

The essays usually make a claim, and then provide a variety of examples.  The amount of examples can be overwhelming, and might not add much addition content to the claim other then as further proofs of concept.

Questions to Consider while Reading the Book
•What is the raison d’etre of the book?  For what purpose did the author write the book?  Why do people read this book?
•What are some limitations of the book?
•Why invent enemies?
•What is the purpose of the enemy?
•How are values defined and their worth declared?
•Why is it difficult to consider complexity of information?
•What impact can a war have on social life?
•What is the absolute, and the relative?  How are they connected?
•Among the elements, why does fire need an explanation?
•Why is there an interest in treasure hunting and finding secret islands?
•How to go about using astronomy?
Book Details
Publisher:         Houghton Mifflin Harcourt Publishing Company
Edition ISBN:  9780544104686
Pages to read:   224
Publication:     2012
1st Edition:      2011
Format:            Paperback
Ratings out of 5:
Readability    4
Content          3
Overall           3

Email ThisBlogThis!Share to TwitterShare to FacebookShare to Pinterest
Labels: Sociology

Book can be found in:
Genre = Politics
Book Club Event = Book List (01/21/2023)
Intriguing Connections = 1) Capitalism, Socialism, their Alternatives and Critiques,
2) How To Allocate Resources?, 3) The Motive, Method, Ideology, and Consequences of Intervention,
4) Get To Know This Worlds' People, Regions, Cities, Nations, and Empires (United States of America), 5) War. 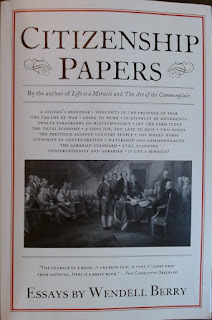 “A government, committing its nation to rid the world of evil, is assuming that it and its nation are good.  But the proposition that anything so multiple and large as a nation can be good is an insult to common sense.  It is also dangerous, because it precludes any attempt at self-criticism or self-correction; it precludes public dialogue.” – Wendell Berry, A Citizen’s Response to “The National Security Strategy of the United States of America”, Page 5

“Facts in isolation are false.  The more isolated a fact or a set of facts is, the more false it is.  A fact is true in the absolute sense only in association with all facts.  This is why the departmentalization of knowledge in our colleges and universities is fundamentally wrong.” – Wendell Berry, Going to Work, Page 41

“People in movements too readily learn to deny to others the rights and privileges they demand for themselves.  They too easily become unable to mean their own language, as when “peace movement” becomes violent.” – Wendell Berry, In Distrust of Movements, Page 44

Email ThisBlogThis!Share to TwitterShare to FacebookShare to Pinterest
Labels: Politics

Review of Rendezvous with Rama by Arthur C. Clarke

Book can be found in:
Genre = Novel, Science
Intriguing Connections = 1) Adventures Of The Space Faring Kind, 2) Once Upon A Future 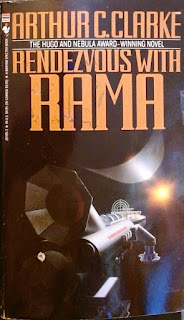 “There was also a sense of danger here that was wholly novel to his experience.  In very earlier landing, he had known what to expect; there was always the possibility of accident, but never of surprise.  With Rama, surprise was the only certainty.” – Arthur C. Clarke, Chapter 4: Rendezvous, Page 11-12

“During the first “nights” in Rama it had not been easy to sleep.  The darkness and the mysteries it concealed were oppressive, but more unsettling was the silence.  Absence of noise is not a natural condition; all human senses require some input.  If they are deprived of it, the mind manufactures its own substitutes.” – Arthur C. Clarke, Chapter 17: Spring, Page 84

“He did not interrupt the Commander again, and made no comment when Norton had finished.  Yes, it made sense, and was so absurdly simple that it would take a genius to think of it.  And, perhaps, someone who did not expect to do it himself.” – Arthur C. Clarke, Chapter 31: Terminal Velocity, Page 165

Review
Overview:
After the Earth has been ravaged by meteorites, leading to a loss of cities, wealth, and knowledge, humans became determined to prevent more disasters.  Turning their energies from fighting each other, to unity in the goal.  By 2130, asteroids were easily discovered and their statistical movements calculated.  But then a mysterious asteroid was discovered, to be a lone wanderer from outside the solar system.  The asteroid was named Rama.  Although initially rejected an unimportant, turned out to be very important.  When images of Rama were taken, Rama was accepted as no mere asteroid, but a massive spaceship.  For information gathering, the ship Endeavour was selected, with its Commander Norton.  They need to find out the purpose of Rama.  This is a space adventure full of decisional uncertainty.  An adventure with plenty of planetary politics.
Caveats?
The book takes a while to build the suspense, which contain repetitive activities.  What the activities do is create a consistent story, and explain decisional minutia.  Details that explain the complexity and sometimes monotony of the type of exploration they are undergoing.
Questions to Consider while Reading the Book
•What is the raison d’etre of the book?  For what purpose did the author write the book?  Why do people read this book?
•What are some limitations of the book?
•Why did humanity become united?
•Who are the simps and what is there purpose?
•How are the planets governed and what are some politics?
•What are the different inhabited planets, their environments, and what kind of cultures did they produce?
•What is Rama?
•What is the purpose of Rama?
•What are some internal features of Rama?
Book Details
Publisher:         Bantam Spectra [Bantam Books]
Edition ISBN:  0553287893
Pages to read:   243
Publication:     1990
1st Edition:      1973
Format:            Paperback
Ratings out of 5:
Readability    5
Content          3
Overall           5