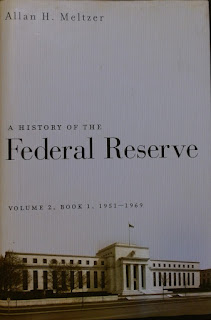 “Independence should be strengthened.  Responsibility for policy outcomes should not be avoided in discussions of independence.  An independent central bank can cause unemployment or inflation.  The public generally blames the administration and Congress for these outcomes.  They may lose office.  Federal Reserve officials may be criticized, but they retain their positions.  Following the two major errors of the twentieth century, the Great Depression and the Great Inflation, no Federal Reserve officials had to resign.” – Allan H. Meltzer, Chapter 1: Introduction, Page 22

“The main factors driving professionalization were the increased demands that governments and the public placed on economic policy, the growing sophistication of financial services and economic analysis, the widespread use of these services, and the frequent crises in the international monetary system.  No to be overlooked was the presence of a new generation of economists who had developed Keynesian economics and were eager to use their tools to improve the country’s economic performance.” – Allan H. Meltzer, Chapter 3: The Early Keynesian Era: A Low-Inflation Interlude, 1961-65 , Page 280-281

This was a Keynesian Era, for many of the economists developed Keynesian methodology, and wanted to try out their tools.  Keynesian economists became prominent within politics.  Keynesianism took a proactive approach to the economy, by using discretionary resources for smoothing business cycles.  The Federal Reserve did improve its ability to resolve crises, but at a cost of incentivizing further bailouts.  There was also a high rate of inflation.  The Federal Reserve was limited in its ability to manage inflation because of other regulations.

Historically there was a need to separate the power to spend, and the power to finance spending by expanding money.  Rules such as the gold standard rule, and balanced budge rule enforced the separation between fiscal and monetary policy.  Both rules lost prominence by 1951.

William McChesney Martin ended the struggle of power between Washington and New York, with Washington in charge.  Greater cohesion of the System also made the System susceptible to political pressure.

Policy followed by the United States was Too Big To Fail, where size of financial firms excused them from failure and obtained bailouts.  The author claims that size should not prevent a failure.  The institution can remain, but with different management and a loss to the stockholders.

Federal Reserve members questioned the rate that banks should repay their debts.  Wanted to apply pressure for repayment, but without causing other banks to borrow.

Economists gained more political power during the 1960s.  Demand for their services was due to frequent international monetary crises, and public policy.  Services that improved due to professionalization of monetary policy.

There was conflict within economic perspectives.  A battle of ideas between Monetarists and Keynesians.  Monetarists claimed that monetary authority determined the stock of money but public demand determined the price level.  Wanting to follow rules of policy, rather than discretionary policy.  Discretionary policy created uncertainty in planning for future actions.  Keynesians thought that discretionary policy can stabilize an inherently unstable economy by adjusting expenditures, tax rates, and interest rates.  The monetarists thought that the private sector is self-stabilizing and that government policy usually made outcomes worse.

Questions to Consider while Reading the Book
•What is the raison d’etre of the book?  For what purpose did the author write the book?  Why do people read this book?
•What are some limitations of the book?
•Why was the Federal Reserve tasked with managing fiscal policy, such as the unemployment rate?
•How did oversight of the Federal Reserve change?
•How did Keynesian economists want to manage the economy?
•What was the conflict between Monetarists and Keynesians?
•How did the Federal Reserve manage inflation?
•Is the Federal Reserve accountable for its responsibilities?
•Why was there a separation between the power to spend and power to finance?  What changed with these views?
•How did William McChesney Martin influence Federal Reserve policy?
•What is the policy of Too Big To Fail?
Book Details
Publisher:         The University of Chicago Press
Edition ISBN:  9780226520018
Pages to read:   686
Publication:     2009
1st Edition:      2009
Format:            Hardcover
Ratings out of 5:
Readability    3
Content          3
Overall           3