Review of The Code of Capital: How the Law Creates Wealth and Inequality by Katharina Pistor

Book can be found in:
Genre = Economics, Law
Book Club Event = Book List (02/25/2023)
Intriguing Connections = 1) The Rights of Property: Physical, Intellectual, and Other Property Rights, 2) Rent. Rent-Seeking! Lucre?, 3) The Impact of Inequality,
4) Capitalism, Socialism, their Alternatives and Critiques,
5) Why Conflict Occurs And How To Resolve Them?,  6) Learning Economics: Basic to Advanced,
7) How To Allocate Resources? 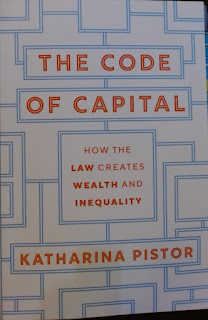 “Decoding capital and uncovering the legal code that underpins it regardless of its outward appearance reveals that not all assets are equal; the ones with superior legal coding tend to be “more equal” than others.” – Katharina Pistor, Chapter 1: Empire of Law, Page 5

“Realizing the centrality and power of law for coding capital has important implications for understanding the political economy of capitalism.  It shifts attention from class identity and class struggle to the question of who has access to and control over the legal code and its masters.” – Katharina Pistor, Chapter 1: Empire of Law, Page 8

“The social costs pf enclosing knowledge can be huge, because control over knowledge is monopolized even though it could benefit everyone without taking anything away from the inventor.  And yet, states have supported the enclosure of knowledge and left it to the code’s masters and official agents in paten offices to police its borders with only sporadic court oversight.” – Katharina Pistor, Chapter 5: Enclosing Nature’s Code, Page 115

Capital is the combination of assets and laws.  Assets can be transformed into capital by the power of the law.  Capital is coded in law, and depends on the legal framework.  Legal modules can give a comparative advantage to some asset holders over others.  What these modules do is determine the assets priority, durability, universality, and convertibility.  Priority ranks competing claims.  Durability adjusts the claims through time, while universality adjusts claims through space.  Convertibility allows the conversion of private credit claims into state money on demand.  Changing these attributes means changing how wealth is distributed, changing who benefits.

Control over the legal code is power that determines how resources are allocated.  Determining wealth based on how assets are legally coded.  For those who have wealth, when that wealth is threatened, the laws can be changed to give them an advantage.  To protect the interests and benefits of some groups over others.  Assets are not equal, for those with superior legal coding have more rights.  Although under the guise of legal equality, some assets are “more equal” than others.  The defense for this, is that all of this is legal.

Capital is not just money.  More than the exchange of goods in a market economy.  Capitalism is a market economy in which some assets get privileged over others.  Guilds were dismantled in favor of competitive markets, but the new businesses have resorted to guild-style practices.

Capital is made from an asset and the legal code.  An asset is anything that can potentially provide an income in the future.  The law turns the assets into capital which has a tendency to create wealth for its holder(s).  Capital is the value determined by expected monetary income.  Capital creates and protects wealth.

Capital can come from physical property, intellectual property, even nature.  What can be turned into a patent are things that are novel, useful, and improvements.   Patents are a form of monopoly.  Monopolies create gains for the few, while costing the rest.  What they try to do is balance everyone’s costs and benefits.

A clean title to land means having no competing legal claims.  In that way, a buyer knows that the property is enforceable.  Liquidity of an assets depends on its legal coding.  Less legal obstacles means that the assets can more easily be converted into cash.

Incorporation means to create a new person.  A legal personality.  Prominent features of corporations are entity shielding, loss shifting, and immortality.  Entity shielding distributes pools of assets, to different creditors.  Loss shifting changes who bears the risk of the firm’s negative consequences.  Immortality is made possible, because to end a corporation would require a bankruptcy proceeding, or a voluntary dissolution by shareholders.

The legal code underlying the code of capital, depends on its enforcement by a state.  Although lawyers use legal modules to empower assets with attributes for their clients, states enforce these laws.  Expansion and fall of capital depends on how the law is written.  There are various legal modules in which capital is coded, such as contract, law, property rights, corporate, and bankruptcy law.  Taking away or adding modules can make or lose wealth.

Legal coding does not only enable price discovery, but also determines the value of assets, creation of wealth, and distribution of wealth.  The laws define what an asset is, and what can be done with the asset.  When expected returns fall behind wanted returns, asset holders can enforce their legal entitlements.

Democratically governed societies guarantee equality before the law, but not everyone can make good use of the laws.  Lawyers use modules to turn ordinary assets into capital.  The legal coding protects the assets from ordinary business cycles, providing longevity to wealth, that sets up sustained inequality.

Firms can go to domestic or foreign laws, thereby choosing which laws apply to them, and seeking those that provide the greatest benefits.  The legal code’s power depends on even a single state’s willingness to enforce it.  If the threat of enforcement is credible, then there will be voluntary compliance without the need for mobilization.

All contracts are inherently incomplete, because no party can anticipate all contingencies, and the effort would be too costly.  Lawyers can be seen as transaction cost engineers by navigating complex regulations and avoiding unnecessary costs, or they can be seen as rent seekers.

Economic success of nations depends on how they utilize law for social ordering.  Law, as a restraint on state power, was claimed as a reason for the rise of the West.  During the 1980s, many nations provided economic and legal reforms which prioritized markets over government in allocating economic resources.  Clear property rights and credible enforcement were meant to allocate the scarce resources to their more efficient owner, benefiting all.

But it was state’s willingness to enforce the private coding of assets in law that enables the legal privileged of priority, durability, convertibility, and universality.  Capital is dependent on state power, and legally privileges some assets which provides a comparative advantage in accumulating wealth to their holders over others.

Contracts and negotiations can happen even them being enforceable in a court of law.  There is no need for formal law enforcement when everyone knows who has better rights.  As long as everyone adheres to established norms, there is no need for a complex legal system, and enforcement powers.  But trade and commerce go beyond established norms, requiring social ordering for dealing with strangers.  Property rights are a solution of a coordination game.

With the scale of social relations, people can now negotiate on large stakes without even meeting people.  This was enabled by coercive enforcement that makes people commit to their arrangements.  Law has enabled decentralized, private enforcement that enables collective expectations while limiting deviant behavior.

The erosion of the legitimacy of states is a structural bias within the legal code of capital, that undermines the very thing that capital depends upon.  Courts discover the meaning of property rights by observing actual practices, rather than by their preconception.  Businesses are insisting that disputes are settles out of court, which in irony makes them more vulnerable.  They both depend on the authority of state law, but also avoid courts.

Law evolves based on every case, with amendments in response to changing norms or political preferences.  Different societies can have different legal needs, and therefore different laws.  Static laws fail to reflect social changes, nor do they respond to the changes.

An example of an ambiguous term is free trade and free markets.  The author takes that to mean lack of laws, and there are economists who would agree with that.  But the term meant no monopolies, as in everyone can participate in exchange no matter where they are from or the products they offer.  Market exchange is still regulated in free trade, just cannot restrict who buys or sells.

Questions to Consider while Reading the Book
•What is the raison d’etre of the book?  For what purpose did the author write the book?  Why do people read this book?
•What are some limitations of the book?
•What is capital?
•What are assets?
•Why is capital coded in law?
•What attributes do legal modules bestow?
•What power does the legal code have?
•Why change the law?
•What is a corporation?
•What happens to capital with the erosion of legitimacy of states?
•How do laws evolve and get interpreted?
•How did the Maya see their land?
•Under feudalism, how could land be transferred?
•How did Europeans change the code of capital on the First Peoples land?
•How did property rights spread?
•What is Coase Theorem?
•What can be coded into capital?
Book Details
Publisher:         Princeton University Press
Edition ISBN:  9780691208602
Pages to read:   239
Publication:     2020
1st Edition:      2019
Format:            Paperback
Ratings out of 5:
Readability    5
Content          5
Overall           5