Review of Invisible Women: Data Bias in a World Designed for Men by Caroline Criado Pérez

Book can be found in:
Genre = Sociology
Book Club Event = Book List (02/18/2023)
Intriguing Connections = 1) The Persecuted and The Persecutors,
2) Why Do People Think Differently?, 3) Why Conflict Occurs And How To Resolve Them?,
4) What It Means to be an Activist 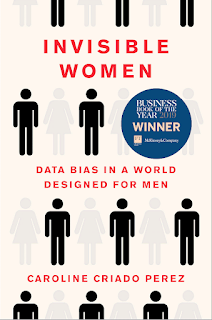 “One of the most important things to say about the gender data gap is that it is not generally malicious, or even deliberate.  Quite the opposite.  It is simply the product of a way of thinking that has been around for millennia and is therefore a kind of not thinking.  A double not thinking, even: men go without saying, and women don’t get said at all.  Because we say human, on the whole, we mean man.” – Caroline Criado Pérez, Preface, Page 9

“The result of this deeply male-dominated culture is that the male experience, the male perspective, has come to be seen as universal, while the female experience – that of half the global population, after all – is seen as, well, niche.” – Caroline Criado Pérez, Introduction: The Default Male, Page 24

“When we exclude half of humanity from the production of knowledge we lose out on potentially transformative insights.” – Caroline Criado Pérez, Afterword, Page 288

Those who make decisions, design policies around their needs.  Creating a data gap about needs not their own.  That is what happens to women.  As men cannot relate to female experiences or have those personal experiences, they do not think about women’s needs.  Not a deliberate or malicious exclusion.  Men just do not think about women’s different needs, which includes biological and social needs.  This is the gender data gap, developed through the absent presence of women.  The silences have negative consequences on women’s daily life.  To rectify this data gap, to understand women and the female experience, all that is needed is to ask women.

Valuable insights can be gained by including women in the production of knowledge, because they have different experiences.  Although women make up half the population, the female experience is niche.  The male experience and perspective is seen as universal.  The word man has become a reference to the human species.  Using the default male identity, many tools, medicines, and infrastructure have been designed using male averages.  The standard for human representation.  But women have different body shapes, chemistry, and use of infrastructure.  This difference has caused many women to be hurt by these designs.  The problem is the social meaning of the female body, not the female body itself.

Without considering the accounts and experiences of women, historical facts become distorted to convey half-truths.  The myths told affect how society sees itself.  Misunderstanding the data has negative consequences.

Women and the Economy:

Women tend to do most of the invisible work.  Work that needs to be done, but is not paid.  Such as cooking, cleaning, and child care.  Men don’t tend to consider the invisible work done around men.  That unpaid work enables the men to go to paid work.

Women’s unpaid work benefits society as a whole.  When governments cut public services, demand for the services does not cease.  The work is transferred to women, reducing their labor-participation rates, and GDP.  As unpaid work does not count in GDP, making a lot of productive effort to go uncounted for.  Need to start collecting data on who is impacted by the programs.

The gig economy has created ways to get around employers providing basic employee rights.  The workers have less rights to begin with, making harder for the workers to ask for more.

Blind auditions are a tool used to prevent the people hiring from seeing whose auditioning or interviewing.  This process was used to get many more women into the New York philharmonic.  The blind audition made the process meritocratic.

Meritocracy is usually a myth, but people believe it to be true even when reality does not fit.  A belief in meritocracy tend to make people biased against it.  Believing oneself as meritocratic, or as not sexist, makes people behave in ways that is less meritocratic, or sexist.

The book is mostly about the negative consequences of the gender data gap.  Not much positive values of rectifying the data gap, showing the benefits of women’s experience.  The gender data gap is not new, with a variety of books which include data and information on women and other often marginalized groups.  There have been cultures and books that features women prominently.  By ignoring the data of these corrections of the data gaps, creates another data gap with the associated misrepresentations.

It was mentioned that asking women is a tactic that can remove the gender data gap.  The problem is that depending on the culture, asking women about women’s views and experiences can cause negative repercussions.  As the men can become stigmatized for asking about those different views.

What is limited is an account of how redesigning everything to incorporate the gender difference would be like.  How society would function, and the female/male institutions would look like.  Historically, the reason for the uniform beliefs and implementations within institutions is that they are cheaper, as diverse changes are often too expensive.  This book shows that there is a lot of value added by women, but that would require change.

Questions to Consider while Reading the Book
•What is the raison d’etre of the book?  For what purpose did the author write the book?  Why do people read this book?
•What are some limitations of the book?
•To whom would you suggest this book?
•What is the gender data gap?
•How is the gender data gap created?
•What happens when women’s experiences are left out?
•What does it mean to see the male experience as the universal?
•What is sex?
•What is gender?
•What is sexual harassment?  What are uncertainties about sexual harassment?
•What happens in a misogynistic culture?
•What is invisible work?
•Who benefits from women’s invisible work?
•What is the gig economy?
•What are blind auditions?
•What is meritocracy?  Does the U.S. have a meritocracy?
•How is infrastructure design discriminating again women?
•How is tool design discriminating again women?
•How did women show men the power of the invisible work in Iceland?
•How does the U.S. married-couple tax joint filling penalize women?
•How does women’s perspective impact profitability?
Book Details
Publisher:         Abrams Press [ABRAMS]
Edition ISBN:  9781683353140
Pages to read:   286
Publication:     2019
1st Edition:      2019
Format:            eBook
Ratings out of 5:
Readability    5
Content          5
Overall           5