Review of Catch-22 by Joseph Heller 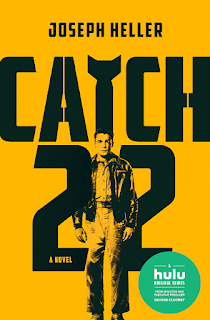 “But Yossarian couldn’t be happy, even though the Texan didn’t want him to be, because outside the hospital there was still nothing funny going on.  The only think going on was a war, and no one seemed to notice but Yossarian and Dunbar.  And when Yossarian tried to remind people, they drew away from him and thought he was crazy.” – Joseph Heller, Chapter 2: Clevinger, Page 31

“But there was no enthusiasm in Yossarian’s group.  In Yossarian’s group there was only a mounting number of enlisted men and officers found their way solemnly to Sergeant Towser several times a day to ask if the orders sending them home had come in.  They were men who had finished their fifty missions.” – Joseph Heller, Chapter 3: Havermeyer, Page 31

“”You’re wasting your time,” Doc Daneeka was forced to tell him.

“Can’t you ground someone who’s crazy?”

“Then why don’t you ground me? I’m crazy.  Ask Clevinger.”

“Then ask any of the others.  They’ll tell you how crazy I am.”

“Then why don’t you ground them?”

“Why don’t they ask me to ground them”?

“Because they’re crazy, that’s why.”

“Of course they’re crazy,” Doc Daneeka replied.  “I just told you they’re crazy, didn’t I?  And you can’t let crazy people decide whether you’re crazy or not, can you?”” – Joseph Heller, Chapter 5: Chief White Halfoat, Page 61

Success has a catch.  A catch that prevents success.  Decision makers create conditions for success, but the moment the conditions are met by someone, there are other conditions that prevent their fulfillment.  The very conditions for success, prevent success.  The fulfillment of goals, requires them to be perpetually unfulfilled.  There is always a catch.  These paradoxical claims are usually used by those in authority, which inspire arbitrary decisions, that leads to benefiting the authority at the expense of their subordinates.  Playing by their rules means preventing one’s own success.  Not playing by their rules, still prevent one’s own success.

The book can be difficult to read, in part because the writing lacks flow, but also because it can be hard to keep up with the paradoxes.  Difficult for the characters, and the reader, to know what the paradoxical decisions mean, and how to overcome them.  There is a humor to the claims and decisions, but given the context, it is usually tragic humor.