Review of The Splendid and the Vile: A Saga of Churchill, Family, and Defiance During the Blitz by Erik Larson

Book can be found in:
Genre = History, War
Book Club Event = Book List (02/04/2023)
Intriguing Connections = 1) Biographies: Auto, Memoir, and Other Types, 2) War,
3) Get To Know This Worlds' People, Regions, Cities, Nations, and Empires (Germany, United Kingdom),
4) Why Conflict Occurs And How To Resolve Them?, 5) Why Do People Think Differently? 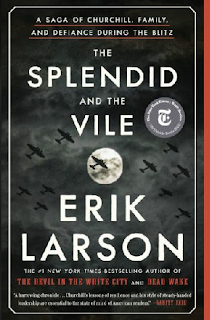 “Such precise and demanding communication installed at all levels a new sense of responsibility for events, and dispelled the fustiness of routine ministerial work.  Churchill’s communiques tumbled forth daily, by the dozens, invariably brief and always written in precise English.  It was not uncommon for him to demand an answer on a complex subject before they day was out.” – Erik Larson, Chapter 4: Galvanized, Page 43

“His continued reluctance to authorize raids against central London and the civilian districts of other big cities had nothing to do with moral distaste but, rather, stemmed from his continued hope for a peace deal with Churchill and a wish to avoid reprisal raids on Berlin.” – Erik Larson, Chapter 27: Directive No. 17, Page 201

“With raids so likely and so predictable, Londoners inclined to use public shelters found themselves following a new and novel routine, leaving their chosen shelter for work in the morning, returning at dusk.  Some shelters began publishing their own journals and bulletins.” – Erik Larson, Chapter 51: Sanctuary, Page 322

This is an account of World War 2 from the British and German perspectives.  From Churchill’s, and Hitler’s perspectives.  How the people were impacted by the air forces, and the bombs.  How each adapted to their situations.  Each side had various assumptions about the capacity of the opposition.  They were not sure if the capacity was actual, or fiction.  Hitler thought that the British would accept a peace treaty, while no British trusted Hitler to uphold any treaty.  As Hitler wanted peace with the British, the air raids were initially meant for military and strategically valuable targets.  But after a German bomber got lost, they inadvertently raided London without thinking that it was London.  The attack on London, provided the moral justification to reciprocate an attack on Berlin.

The air raids became likely, and predictable.  The British peoples changed how they organized their time.  They went to work in the morning, and returned to public shelters at night.  Some shelters even started their own publications.  The German peoples had access to the British public broadcasting stations, and were listening to them.  The German propaganda claimed this was an act of sabotage.  Rather than deterring people from listening to the broadcasts, the German people found them irresistible, and kept this listening behavior secret.

As Chamberlain had to resign as Prime Minister.  The resignation meant that there were two people favored to take the post.  It was going to go to either Halifax or Churchill.  Halifax was seen as more stable than Churchill.  Halifax was thought to be an individual who could prevent another catastrophe.  Halifax acknowledged a personal limitation in the ability to lead during a time of war, and therefore did not want to the position.  Some blamed Hitler for the rise of Churchill, because it was Hitler who declared Churchill an enemy, thereby making Churchill the hero for the British and U.S.

Churchill’s character was predictably unpredictable.  Churchill was able to compartmentalize information, had perspective, and was able to change attitude quickly.  Was seen as taking dynamic actions, in various decisions, contemporaneously.  An agent of too much change, too quickly.

When Churchill wanted an answer to problems no matter how complex they were, everything else had to be dropped, and the responses to arrive quickly.  Communication had to change, to provide the information needed without unnecessary claims, so that a lot of time and energy was not needed in deciphering the vital information.

Churchill updated the public with speeches that gave an account of facts tempered by reasoned optimism.  While avoiding what was happening would have been foolish, it would have been more foolish to demoralize the people.

The Need For Allies:

The British did not think that France would fall to the Germans.  France was meant to limit German invasion capabilities by reducing the reach and lethality of the bombers.  When France did fall, military forces had evacuated from Dunkirk successfully.  Using the strategy of many boats of various types had been effective, but could also be used in reverse.  The lesson learned was that a German invasion would be more difficult to prevent than the British assumed.

Churchill understood from the start, that the war could not be won without the participation of the United States.  Alone, Britain could endure and prevent German expansion, but could do more without the industrial might and armed forces of America.  Churchill wanted to get the United States into the war quickly, because they believed that the British air force was inferior to the German air forces.

The Germans also thought America would shift power, and did not want to get America involved.  Germany’s also thought that their air and navy capacities were deemed far greater and better than the British.  German forces were able to prevent various supplies from reaching the British.

The American public did not want to be in any war.  They had an isolationist stance, and opposed a declaration of war.

Searching For Peace, And Reprisals:

Hitler was not very interested in invading England.  Hitler assumed that the British forces were completely out matched and in disarray.  Hitler also thought that Churchill would see the inevitable, thereby stop opposing Hitler, and submit.  Hitler used various secret channels to ask Churchill for peace.  Hitler’s goal was Soviet Russia, and did not want a war on two fronts.

Hitler ordered the air force to focus on British air forces and various military industrial targets.  Did not want to attack London and other civilian districts, to not only prevent potential reprisal raids on Berlin, but also the hope for a peace deal with Churchill.  The British did not understand why the German air raids went after the military targets without much a focused pattern, while leaving London alone.

After the inadvertent attack on London, and the reprisal on Berlin, Hitler was no longer reluctant to attack London.  Still wanted to focus on strategically valuable targets to prevent a mass panic, but understood that the inaccuracy of the bombings meant that the attacks would inflict damage on civilian districts.  Hitler still wanted peace with the British, rather than seeking their destruction.  The problem was recognized that for a peace agreement to be considered, would require assurance that Hitler would honor the agreement, while nobody believed that Hitler would adhere to any treaty.

The focus is mostly narrative and personal experiences, which means there was not many explanations of the content and information on the rest of the war.  Although there were some German perspectives, but the book focused mostly on Churchill and those who surrounded Churchill.  There was barely any information of the other nations involved in the war.

Questions to Consider while Reading the Book
•What is the raison d’etre of the book?  For what purpose did the author write the book?  Why do people read this book?
•What are some limitations of the book?
•To whom would you suggest this book?
•What did the British think of the Germans?
•What did the Germans think of the British?
•Why the focus on air raids?
•What military capacities did each side have?
•Why did Hitler want peace with the British?
•How did Hitler try to make peace with the British?
•Who did the British society change due to the air raids?
•How did German propaganda work?
•Why was Churchill chosen as Prime Minister?
•How did Churchill manage communications?
•How did Dunkirk influence thinking?
•Why were the British relying on France?
•Why did Churchill want America to join the war?
•What was America’s position on the war?
•How did Clementine influence Churchill?
Book Details
Publisher:         Crown [Random House]
Edition ISBN:  9780385348720
Pages to read:   636
Publication:     2020
1st Edition:      2020
Format:            eBook
Ratings out of 5:
Readability    4
Content          3
Overall           3