Review of Influence: The Psychology of Persuasion by Robert B. Cialdini

Book can be found in:
Genre = Psychology
Book Club Event = Book List (07/16/2022)
Intriguing Connections = 1) War for Your Attention, 2) To Cooperate Or To Defect?,
3) Ways To Help Oneself and Life Lessons, 4) Why Do People Think Differently?,
5) How To Have A Conversation? 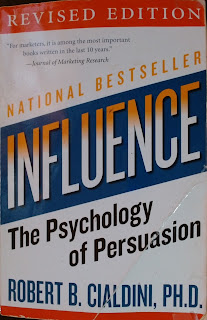 “Each principle is examined as to its ability to produce a distinct kind of automatic, mindless compliance from people, that is, a willingness to say yes without thinking firsts.” – Robert Cialdini, Introduction, Page xiv

“Automatic, stereotyped behavior is prevalent in much of human action, because in many cases it is the most efficient form of behaving, and in other cases it is simply necessary.” – Robert Cialdini, Chapter 1: Weapons of Influence, Pages 6-7

“We have been subjected to them from such an early point in our lives, and they have moved us about so pervasively since then, that you and I rarely perceive their power.  In the eyes of others, though, each such principle is a detectable and ready weapon – a weapon of automatic influence.” – Robert Cialdini, Chapter 1: Weapons of Influence, Page 9

Each individual has a lot on their mind, and has a limited mental bandwidth.  To handle the complexity and amount of information, mental shortcuts are created.  Automatic responses and heuristics which enable efficient behavior.  The automatic, fixed-action patterns work most of the time, but can be activated at wrong times as well.  This can happen when the automatic response is being manipulated.  Manipulated by those who figured out how to tap into other people’s automatic responses, and then use them as weapons of automatic influence.  Weapons of influence that get automatic, mindless compliance.

As society has become flooded with information which requires more mental bandwidth, understanding automatic influence becomes more prevalent.  Using little information to make decisions helps when the information is reliable.  Facilitating quicker decision making without much problem.  The problem is when normally trusted information is being exploited, leading to erroneous actions.  Knowing how others can influence choices, can prepare the individual to not be as gullible to future manipulation.  But the book provides more than just a guide on how to spot exploiters, the book facilitates an understanding of how to make human interactions more meaningful.

Reciprocity is engrained in society.  Societies that operate with reciprocity have a competitive advantage.  An advantage thy keep by making sure that members understand what is required.  Breaking reciprocity rules leads to social sanctions.  Which has conditioned people to feel uncomfortable being beholden, even with voluntary gifts, which creates a desire to repay favors.

Small favors provided before a request, increases the chance of compliance because of the rule of reciprocity.  Exploiting the automatic rule of reciprocity means that someone is turning reciprocity into an unfair exchange.  An initial small favor makes an individual feel obligated to repay with a substantially larger favor.

Reciprocity works with favors and concessions alike.  After making a concession, there is a feeling of obligation to make concessions in return.

Obligation to repay is important for reciprocity, but it is the obligation to receive that is very exploitable.  The individual who receives, has little control from whom and what is received.  What that does is give power to the giver.

Difficult to tell whether an initial offer is honest, or a step into an exploitation scheme.  Denying all offers, means denying all the rewards of honest offers, which do not want to exploit.  Although if an exploitation attempt is recognized, exploiting the exploiter seems like a justifiable behavior.

Consistency makes it easier to handle the world.  Makes things more predictable.  The benefit of consistency is reduced energy need for forthcoming decisions.  No need to spend energy on making decisions when decisions have already been made.  There is pressure to stick with decisions made, so that others can predict individual behavior, and to manage personal mental bandwidth.  Causing humans to want to be perceived as behaving consistently.

The need to be consistent can be misused.  Manipulators can structure interactions to present their views as keeping the individual consistent, which does lead to the manipulator’s benefit.

Individuals use their prior behavior to inform themselves of who they are.  Shaping their values and beliefs.  Small commitments, that seem innocent, change the way an individual perceives oneself.  After the small modification, other modifications become possible because they have become consistent with normal behavior.

Thoughts and decisions can be forgotten or denied, as purely verbal statements easily are.  A way to prevent someone from forgetting or denying their prior decisions, is for them to record them.

Taking ownership of what is said and done, encourages change.  Choosing to change, rather than because of strong external pressure.  Large rewards are an external pressure that can prevent an individual from taking inner responsibility for the claims made or actions done.  External pressures do generate short term changes, but not long term commitments.

What determines appropriate decisions is what other people do in the situation.  Social proof as a weapon of influence.  The more people believe something, the more proof the idea has, even when there is disconfirming physical proof.  More than just looking to others for what they are doing, people tend to look at what similar people are doing in the situation.  Which is where social proof can be manufactured, as social evidence can be falsified to get individuals to do what the exploiter wants them to do.

In an uncertain situation, uncertainty can be resolved by how others behave.  It may be that no one within the situation knows how to appropriately resolve the uncertain situation, leading everyone to look to everyone else for guidance.  This is a problem called pluralistic ignorance.  Even under an emergency, people might not give aid because they are unsure if it is a genuine emergency, or others might provide the aid.  But, when it is certain that there is an emergency, many are willing to give aid.

Being liked increases the chances of people being influenced.  Similarity facilitates liking, whether in appearance or values.  Being liked for a particular feature can produce a halo effect.  As that singular characteristic dominates how a person is perceived by others.  Attributing liking the characteristic, to everything the individual has to offer.

Liking is about association.  Which creates problems for bearers of bad news, as the bearer becomes disliked by association.  Even if they did not themselves create the bad news.  People tend to try to associate with successful others, while avoid publicizing ties to those who fail.  This is usually because the individual does not have much self-attainments, and tries to associate with those of others.

Authority is associated with power, those who have access to more information.  Making it beneficial to go along with the authority figure, usually.  People tend not to defy authority figures, even when tasked with doing harmful acts.

Scarcity changes how the brain perceives everything.  Changing the appeal of objects.  Imperfections of a product are dismissed when considering the product’s scarcity.  Scarcity means a loss of freedom, which people will do a lot to keep opportunities open.  Desire in increased for items that have become less available, that have become more scarce.

There is a stereotype that expensive products mean’s good products.  An automatic response that indicated quality, has become exploited as many items have increased their price to capture this habit.  There are products which would be difficult to sell, until their price has gone up.  The product has not changed, but the price has.

People see each other differently whether they are competitors, or compatriots.  Competition can force negative attributes on the opposition.  While having a common goal gets people to see the others as reasonable.  Competition is a great motivator, and should not be removed, but needs to be managed to prevent adverse effects stemming from negative attributes that competitors place on each other.

The book lacks as a practical guide to thwart exploiters trying to influence behavior.  What the book does, and the author recognizes, is that knowing about the ways that attention is manipulated is part of the solution, but knowing about them is not the whole solution.

Perception and cultures change the effect that the weapons of influence can have.  Different cultures have different responses to similar activating words and activities.  Different cultures provide their own sets of automatic thoughts of habit.  There are many examples within the book that are influenced by culture, which means that the responses need to be adjusted to each culture.

Questions to Consider while Reading the Book
•What is the raison d’etre of the book?  For what purpose did the author write the book?
•What are some limitations of the book?
•How do individuals deal with large amounts of information?
•What is a weapon of influence?
•What are the different types of weapons of influence?
•How can decisions be manipulated?
•How does reciprocity work?
•How can reciprocity be exploited?
•Why is there a need to be consistent?
•How to change people’s behavior for long term commitments?
•How do people respond to uncertainty?
•How can social proof be exploited?
•What is the halo effect?
•What influence does similarity have with influencing behavior?
•What is the impact of association with news and other people?
•Why do people follow authority figures?
•How does scarcity change perception?
•How to get people who dislike each other, to become more reasonable towards each other?
•What is the contrast principle?
•Why are there some severe initiation ceremonies?
Book Details
Edition ISBN:  9780061241895
Pages to read:   284
Publication:     2007
1st Edition:      1984
Format:            Paperback
Ratings out of 5:
Readability    5
Content          5
Overall           5
at May 13, 2022