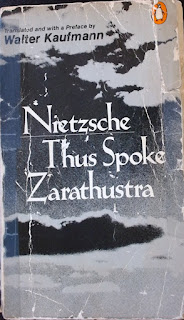 “And beware of the good and the just!  They like to crucify those who invent their own virtues for themselves – they hate the lonely ones.  Beware also of holy simplicity!” – Friedrich Nietzsche, On The Way Of The Creator, Page 64

“And, as if there were a special secret access to knowledge, buried for those who learn something, we believe in the people and their ‘wisdom’” – Friedrich Nietzsche, On Poets, Page 127

Zarathustra comes down from the mountain, to empower humans.  To teach how humans can raise themselves to become better.  To become overman.  Zarathustra seeks creators, to replace God.  As God has died.  Empowerment requires breaking from normal routines.  Ideas of the past, even the noble ideas, become corrupted over time.  Pride in what was already accomplished prevents people from looking to create more.

Humans are above animals, but have not yet become overman.  The overman creates their own values.  Creating is less about the showmanship, but about the values that are created.  The path of a creator can be a lonely one.  Making them easy targets for those who belong to groups.  Being lonely, can mean lack of social support.

With each interaction, Zarathustra learns more about what it takes to convince others.  The need for followers, who will then proceed to spread the message.  A creator seeking fellow creators.

Nietzsche denounced religion in various ways.  And yet in the book, Nietzsche uses religious iconography.  Purposely using religious references as an undercurrent to oppose religion.

The book can be very difficult to read.  The book was written quickly and without edits due to the authors’ health.  Another aspect of the writing making the book difficult is that many references are covert, making them easy to miss for those not prepared to see them.  Best to read the book after learning about Nietzsche’s background, and some history of European religious views and morals.

The references and contrasts to animals are antiquated.  Appropriate for era of the book, but a different contrast would suit better.  This does not reduce the value of empowering humans, but the animal contrast has become too simple.