Review of My Name is Red by Orhan Pamuk

Book can be found in:
Genre = Novel, History
Intriguing Connections = 1) Get To Know This Worlds' People, Regions, Cities, Nations, and Empires  (Ottoman Empire),  2) Some Type of Romance 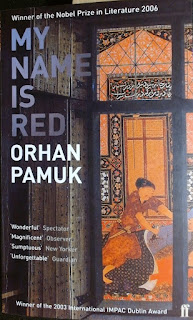 “In later years, however, I only worked on manuscript pages because Our Sultan paid well for them.  I can’t say it seems insignificant now.  You know the value of money even when you’re dead.” – Orhan Pamuk, Chapter 1: I Am A Corpse, Page 4

“I bit him so hard on the leg that my canines sank right through his fatty flesh to the hardness of his thighbone.  For a dog, you see, nothing is as satisfying as sinking his teeth into his miserable enemy in a fit of instinctual wrath.” – Orhan Pamuk, Chapter, Page 12

“Now and again, I even feel as if I haven’t committed any crime at all.  Four days have passed since I was forced to do away with hapless Elegant, who was a bother to me, and only now have I, to some extent, accepted my situation.” – Orhan Pamuk, Chapter 4: I Will Be Called A Murderer, Page 17

During the late 16th century Ottoman Empire, the Sultan requests a book.  A book celebrating the history of the peoples.  Although the request is meant to be a secret, it is not a secret for long.  For someone working on the project died.  A miniaturist is found to be murdered.  A mystery develops as to why someone would murder a miniaturist.  There is a great beauty that everyone falls in love with, which could have caused jealousy.  Could have been professional competition gone wrong.  Greed for money or fame.  Maybe it was the different style within the artwork.  For rather than using traditional artwork styles, they were using foreign styles.  A mystery that needs resolving, especially after the second murder.

The story is narrated from many perspectives.  Not just from the perspective of people.  Perspectives from the dead, inanimate objects, abstract ideas, animals, the murderer, and others involved in the affairs.  Bringing with them pieces of the puzzle, and diverse philosophical insights.  The book contains a lot of philosophy on values and art.  Providing a cultural history.

The writing of the story can become potentially confusing.  The perspectives can change quickly, and although they provide glimpses to the events from different perspectives, it can be difficult to put them together.  The tangents provide a lot of philosophical value, but can make the narrative a bit discontinuous, reducing the flow.

As this is a cultural history book, some aspects of the culture can be misunderstood without prior knowledge.  A broad cultural history is provided, but the reader can miss certain aspects.