Review of "Surely You're Joking, Mr. Feynman!": Adventures of a Curious Character by Richard P. Feynman 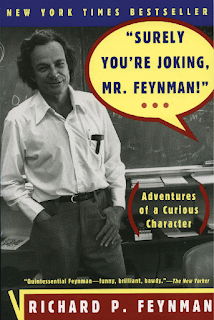 “I realized that if I’m going to talk to anybody else, I’ll have to use the standard symbols, so I eventually gave up my own symbols.” – Richard Feynman, He Fixes Radios by Thinking!, Page 23

“I don’t know what’s the matter with people: they don’t learn by understanding; they learn by some other way – by rote, or something.  Their knowledge is so fragile!” – Richard Feynman, Stole the Door?, Page 35

This book makes you feel you are inside of a brilliant mind.  Not just brilliant, but a witty prankster.  From an early age, Feynman was always thinking and doing experiments.  While experimenting, also had a lot of practice as an engineer fixing technology.  Observing how something could be better, and innovating to make improvements.  Curiosity drove Feynman to many experiments, but some experiments got Feynman into trouble.  Each experiment informed Feynman, and provided ideas about better alternatives.  Even during more serious times, such as working on the Manhattan Project, Feynman sought humor with the experiments.  Experimenting with what information could go through the censorship, and the pranks that could be pulled on the censors.  This book shows Feynman’s personality, of who Feynman was.  Incessantly curious, with a rigorous intellect, but knowing when other knew more.  Even acknowledging when some problems were too difficult for Feynman.

There is some science, but the book is not about the science.  It is about who Feynman was, which did have a lot to do with science.  Social norms have changed, which can make some of Feynman’s views antiquated and inappropriate.  Given Feynman’s views were at times mischievous, Feynman might not be a good role model.  Many of Feynman’s observations are interesting and can spot a problem, but that does not mean that Feynman understood the whole situation, and sometimes reacted poorly.