Review of The Meaning of Human Existence by Edward O. Wilson

Book can be found in:
Genre = Philosophy
Book Club Event = Book List (06/25/2022)
Intriguing Connections = 1) The Evolution of Evolution, 2) What Makes Science A Science? 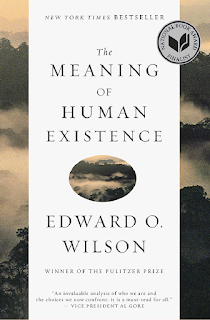 “Every decision made by a human being has meaning in the first, intentional sense.  But the capacity to decide, and how and why the capacity came into being, and the consequences that followed, are the broader, science-based meaning of human existence.” – Edward Wilson, Chapter 1: The Meaning of Meaning, Page 7

“Humanity, I argue, arose entirely on its own through an accumulated series of events during evolution.  We are not predestined to reach any goal, nor are we answerable to any power but our own.  Only wisdom based on self-understanding, not piety, will save us.” – Edward Wilson, Chapter 1: The Meaning of Meaning, Page 9

“A premium was placed on personal relationships geared to both competition and cooperation among the members.  The process was ceaselessly dynamic and demanding.” – Edward Wilson, Chapter 2: Solving the Riddle of the Human Species, Page 13

Meaning can mean intention, which implies a designer.  Leading to many creation stories, of existence for a purpose.  But science shows that accidents of history, are the source of meaning.  Networks of events, that seem random but obey general laws.  Making adaptations, which themselves change the likelihood of other adaptions.  Human decision has intention, but the capacity to decide comes from evolutionary historic accidents.  Self-understanding is the guide to human choices.  Survival based on tolerance of independence of thought.  For humanities existence is self-made.

Humans have very limited perception of the world they live in, but science has provided tools to make overt the unseen worlds.  But it is not the technology that is most valuable in society, it is the humanities subjects.  Through reflections of humanity, comes a lot of ideas about how to shape society, and thoughts on extraterrestrial life.

The human species has a long complex history of cooperation, and competition.  Seeking belonging, within personal relationships as it was vital for general survival, and social survival.  What belonging required was a dynamic and demanding understanding of the intentions of fellow members.  Considering their potential responses, and inventing competing scenarios of future interactions.  Gossip was a source of information about others.  Being selfish benefits the individual within the society over others members, but societies of caring individuals have advantages over societies composed of selfish individuals.

The enlightenment brought with it science, technology, and reason that shaped the world, but they did not impact the people in a deeply emotional level.  That was left to the humanities subjects.  For as science removed the humanities from their understanding, the creative arts were left for the humanities.

Science is meant to be without religion or ideology.  Competitively testing hypothesis, which comes from partial evidence and imagination.  The rate of scientific discoveries is declining, while needing more expensive technology and teams to make the discoveries.  Scientific discoveries might be becoming more limited, but the humanities subjects are evolving and diversifying.

Technology is giving humans the ability to abandon natural selection, in favor of directed evolution.  Changing the genes that make up humans.  Redesigning biology with a shopping list of different alternations that can be made into what the individual wishes them to be.

Aliens, extraterrestrial beings might currently be fiction, but even as fiction, they act as a reflection of human values.  For the aliens, it is not technology or knowledge that would fascinate them about humanity, for they would already possess it.  As humans are the ones being visited, alien technology and knowledge is far superior to that of humans.  What would fascinate them is the humanities.  The humanities subjects would be something that the aliens can learn, and obtain value from.

The theme of the book is science and has scientific reasoning, but there are also hypothetical implications of what science has to offer.  Making claims to the limits of knowledge, and extraterrestrial life.  The ideas come from what is known, and raise questions about these issues, but has verification problems.  Some claims can be contradictory as we do not know how much is actually left to know.

Questions to Consider while Reading the Book
•What is the raison d’etre of the book?  For what purpose did the author write the book?
•What are some limitations of the book?
•What does it mean to have meaning?
•Does human existence have meaning?
•What did the enlightenment do, and what were the limitation of the enlightenment?
•What do humans perceive?  What do humans not perceive?
•What are the limits to scientific discoveries?
•What use are the humanities subjects?
•Why do humans want to belong to groups?
•How does evolution work?
•Should extraterrestrial life be considered?
•What are the proximate and ultimate explanations?
•What is the different between natural selection, and inclusive fitness?
•How do plants suppress invaders?
•Are human societies superorganism?
•An extinction paradox?  Why is there concern over species extinction?
•Does anyone have free will?
Book Details
Edition ISBN:  9780871404800
Pages to read:   123
Publication:     2014
1st Edition:      2014
Format:            eBook
Ratings out of 5:
Readability    5
Content          4
Overall           4
at May 06, 2022