Review of The Dawn of Everything: A New History of Humanity by David Graeber, David Wengrow 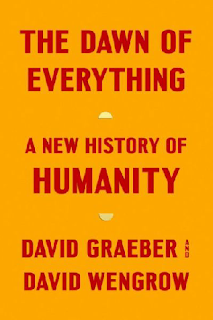 “Compared to any of these, a word like ‘inequality’ sounds like it’s practically designed to encourage half-measures and compromise.  It’s possible to imagine overthrowing capitalism or breaking the power of the state, but it’s not clear what eliminating inequality would even mean.” – David Graeber, and David Wengrow, Chapter 1: Farewell to Humanity’s Childhood, Page 17

“When it comes to cherry-picking anthropological case studies, and putting them forward as representative of our ‘contemporary ancestors’ – that is, as models for what humans might have been like in a State of Nature – those working in the tradition of Rousseau tend to prefer African foragers like the Hadza, Pygmies or!Kung.  Those who follow Hobbes prefer the Yanomami.” – David Graeber, and David Wengrow, Chapter 1: Farewell to Humanity’s Childhood, Page 27

The stories being told about the past, impact how humanity sees itself.  Impacts how people interact with each other and the society that is created.  That is why it is important to understand how people came to be, how people came to have the social conditions that they have.  Research on the history of humanity sought for origin stories about social constructs, with many of the ideas coming from hypothetical conditions due to lack of data.  But now there are actual historic anthropological records, which change the way humanity understands itself.

What the research shows is a lack of origin on inequality, the state, and many other social features.  Diversity as the norm rather than a singular original homogenous equality state.  Diversity of responses to various conditions.  The diverse responses of societies are more complicated than they appear, as features that appear better or worse than the alternatives, can have very different conclusions.  Humanity is a composition of projects of collective self-creation.

The normal narrative of humanity, is that humanity appears to be hierarchical throughout history, which has enabled individual sacrifices of short term gains, in favor of collective long term prosperity.  What anthropological records reveal is that there was diversity in how human societies cooperated.  Diversity in the political unity of humans.  There is also a lack of hierarchies.

Many accounts of historical narratives, make very simplistic and homogenous caricatures of peoples.  Undermining or destroying human possibility.  Simplification might be needed for social theory, the problem is when forthcoming views continue to simplify.

Humans appear to have an instinct for hierarchical relations of dominance-submissive.  A behavior inherited from simian ancestors.  Humans have become different, giving them the ability to decide not to engage in such a way.

For some society, it was hard to create a hierarchy because there were many who could take on the responsibilities.  There were many alternatives for how to manage society, thereby preventing monopolization by any given social leader.

Hierarchy, as in a state, was assumed to be needed for complex societies.  That coordination required an entity which has a a monopoly on legal coercive power.  But records show that even without a state, complex societies have existed.  Power is derived from control of violence, control of information, or individual charisma.  Power sources can exist simultaneously to some extent.  Even within a hierarchy or a state, there is problem with delegating authority to fulfill administrative burdens.  The problem is that those who are meant to represent authority can ignore the decrees or interpret the decrees differently.

The original inequality arguments came from Rousseau, and the thoughts about peoples of the past were hypothetical.  Part of a philosophical argument, in response to a writing competition.  Later, different authors created different hypothetical histories and the logical reasons for the divergence to inequality.  Depending on which origin story picked, either Rousseau or Hobbes, anthropologist tended to cherry-pick case studies that fit the claims of the philosopher they supported.  The assumption of an initial idyllic state, and an event causing society to go in the wrong direction, ossified researcher interests and made many unwilling to think of alternatives.

Inequality itself has many different understandings.  The consequences of eliminating inequality are a mystery, while it can practically be understood what it would mean to overthrow capitalism, or remove the state.  Equality might occur simply because everyone is equally poor.

Most ideas are not novel.  The ideas only seem novel because they keep picking on those who had opposing views.  Finding and magnifying minor issues with the opposition, but then not giving credit to the opposition for many of the same views in the book.  For many ideas in this book, came from other sources, that include the opposition.  Most of the information in this book can be found in other much older books, even in books of the opposition.  What this book does well is reorient the discussion away from a search of an idyllic origin, to consider the diversity of human experience.

There is emphasis in the book about having and relying on new data, recent data.  Making it a puzzle why they pick on errors of those who did not have the data.  As if the people who made claims without the new data, would have made the same claims with the new data.  The people would have changed their claims to the new information.  They do reference people that seem not to have changed their views with data, but never point to the same people who have changed views with the new data.  As with previous data, more data will come, which makes it possible that the authors would be wrong.  There actually is more recent data, that counters some of the authors claims.

The impression from the book is that what makes some data wrong, is not the actual data, but on the authors whims, those whom they choose to support or undermine.  The author claim that their opposition cherry picks data, but so do the authors.

The authors recognize that ideas are a reflection of data, and other people ideas.  Errors of those who they support, are excused.  While they dismiss their oppositions ideas.  Normally finding exceptions with opposing claims, but not necessarily providing a good reason to oppose.

The values of the past are different.  The authors use conversations with indigenous people in the past, and with contemporaries as if their views are the same for the societies they represent, throughout time.

Questions to Consider while Reading the Book
•What is the raison d’etre of the book?  For what purpose did the author write the book?
•What are some limitations of the book?
•Does understanding human history matter?
•What are the origins of human social constructs?
•Why did researchers seek origins to human social constructs?
•How do the author approach human history?
•Are hierarchies needed?
•How do people cooperate with each other?
•What is the origin of the state?
•How is power derived?
•What does inequality mean?
•Is there anything fundamental about humans?
•How did the enlightenment thinkers get their ideas?
•How did societies develop agriculture?  What are the diverse responses to agriculture?
•Can there be trade without a market economy?
•How can people from different cultures react to people from another culture?
•What is schismogenesis?
Book Details
Edition ISBN:  9780374721107
Pages to read:   534
Publication:     2021
1st Edition:      2021
Format:            eBook
Ratings out of 5:
Readability    4
Content          4
Overall           3
at May 02, 2022