Review of Euclid in the Rainforest: Discovering Universal Truth in Logic and Math by Joseph Mazur

Book can be found in:
Genre = Philosophy, Epistemology
Intriguing Connections = 1) The Style of Math, 2) How to Teach? How to Learn?,
3) What Makes Science A Science? 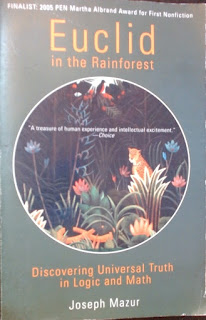 “Mathematics enjoys a reputation for being an intellectual pursuit that generates universal truths.  But contrary to what many of us think, those truths are not communicated through airtight chains of logical arguments.  The essence of proofs contains something more than just pure logic, just as music is more than just musical notes.” – Joseph Mazur, Introduction, Page x

“They might use the word “obvious” to communicate a strong belief that a formal proof can be found lurking behind a heuristic argument; after all, the whole notion of proof in mathematics has never been clearly defined.  It is normal for mathematicians – and everyone else – to make true statements long before formal proofs are found.  But sometimes the omission of a logical detail backfires.” – Joseph Mazur, Chapter 3: The Simple and Obvious Truth, Page 38

“It is a natural question for a mathematician in the forest because we can get so involved in seeing ideas through our minds’ eyes that we overlook the natural world.  Yet, after all due consideration, we confirm or deny facts according to what we see or what our other senses tell us.” – Joseph Mazur, Chapter 3: The Simple and Obvious Truth, Page 39

Mathematics has a very long logical tradition, but it is far more than just logic.  Within the logic, geometry, infinity, probability, and statistics, are found applications to real life, science, and the history of math itself.  With a psychological undercurrent, the book teaches how decisions are made, how to think, how to reason, the role of perception and beliefs on thoughts and decisions.

Math demand precision, can be founded on imprecision.  Math sometimes requires belief in answers devoid of experience and the senses.  What can be done mathematically, cannot normally be done in reality.  Making math not a perfect representative for reality.  But the unrealistic concepts, which themselves are just logical extensions of practical concepts, facilitated in understanding concepts that do impact reality.

Additional differences between reality and math, is that while natural numbers are ordered, objects found in the real world are not ordered.  No ordered sequence to be followed.  Within things that go on for infinity, becoming is merely appearance.  But we do not actually know much beyond the finite.  What logic does is spot contradictions between premises and the conclusions.  Logic can make statements invulnerable, but logic can also be devoid of meaning.  Logic alone cannot persuade.

There are many mathematic puzzles in this book, which can cause the reader to slow down, in order to think about them more deeply.  Slowing down can mean breaking the link with the narrative.

As this is primarily a book about math, having an interest and some background in math can help bring more understanding to the topics.  Some parts can be difficult to understand, but the book does reveal the beauty in math.