Review of Globalization and Its Discontents Revisited: Anti-Globalization in the Era of Trump by Joseph E. Stiglitz

Book can be found in:
Genre = Economics
Intriguing Connections = 1) Globalization and International Trade: A Known Problem?,
2) To Cooperate Or To Defect?, 3) How Competitive Is Competition?,
4) Why Conflict Occurs And How To Resolve Them?, 5) The Impact of Inequality,
6) Learning Economics: Basic to Advanced 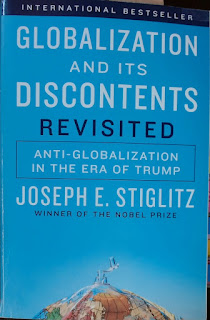 “The United States and other advanced countries wrote the rules of globalization, and they run the international organizations that govern it.  The complaint of those in the developing world was that the advanced countries had written the rules and managed these international organizations in ways that disadvantaged them.” – Joseph Stiglitz, Introduction, Page xvi

“The Failures of globalization were not inevitable.  These failures were no, for the most part, failures of economic science.  The adverse effects were predictable – and predicted.” – Joseph Stiglitz, Introduction, Page xxvii

“Everything the government does has distributive consequences, and there are many firms (and their owners) that would benefit from protectionism – even if others, including exporters, would lose.  Of course, the business that would be helped seldom ask for protectionism on the grounds that it would increase their profits.  They always claim to be selfless entrepreneurs, asking for government assistance to protect them against unfair competition on behalf of their workers.” – Joseph Stiglitz, Chapter 3: The New Protectionism, Page 55

National economic policies impact other countries, in a contagious manner.  A downturn in a country, causes the country to import less, which means that the exports in the other country lose.   Countries can shift demand away from imports, to domestic production, while incentivizing exports.  This is done by tariffs, and currency devaluation.  These national policies, have international ramifications.  As other countries have the same tool kits, and have used them.  The lead up to the Great Depression saw countries try to boost their economy at the expense of other countries, such as the U.S. Smoot-Hawley Tariff Act of 1930.  Causing a trade war, and world wide economic problem.  For want to avoid another trade war, countries put in effort to create global trade rules.  The efforts have prevented trade war, but still had occasional skirmishes.

Countries benefit from enjoying outcomes of other people’s labor.  There would be no point to just sell everything that is produced.  Globalization has brought with it higher standard of livings, enriching many people, and making people better off.  Many who vilify globalization, tend to overlook its benefits.  Although advocates of globalization, were also very unbalanced as they emphasized the benefits but limited exposure of the downsides.  Dishonesty about globalization came from those who benefited from globalization, but did not want anything to do about the adverse effects.

Rather than compete on comparative advantages, trade can be directed when there are market distortions.  Firms can be provided with subsidies for production.  Not simple subsidies, but complex version of them.  Such as a low interest rate, or bailing banks out.  Not charging firms for the cleanup of the environment that the firms have damaged.

Industries that compete with imports would benefit from protectionism.  Protecting the industry would mean that others, such as those who export, would lose.  The industries claim that their want for government assistance would increase their profits, as a selfless act for the protection would help their workers.  Even though on other platforms they prevent workers from becoming better.

Keeping prices below costs for an extended period of time can have a legitimate reason, such as previously building too much product.  In this case, consumers win because of lower prices, and firms lose.  But selling below costs can be predatory dumping.  When a firm tries to get rid of competition and create a monopoly.  There are few successful cases of defending against predatory pricing.  Because there are so few times when prices where predatory.  Dumping provisions tend to be protectionist, rather than actually prevent dumping.

The Rules of the Game:

The terms of trade, the rules for globalization, were written and enforced by the developed countries.  Written to their benefit, while to the disadvantage of the developing world.  Developing countries claim that the rules are advantageous to the developed countries.  Not only does the lack of voices from the developing countries made globalization less democratic, but in many cases, the only views that mattered where those of the United States.  While the U.S. created a version of globalization to serve its interest, the rules were needed to be changed when the version did not seem enough.  But the way globalization operates has changed, because the power dynamic has shifted.  The rules that were created by a few or one country for their benefit and their corporations, do not work under a multipolar world.

Late 20th century and early 21st century globalization was not based on ‘free trade’, but managed trade.  Managed in favor of special corporate interest in developed countries, without much consideration for others and at the expense of everyone else.  Ideology of globalization special interest groups were not congruent with the interests of everyone else.

Corporations investing in other countries have a lot of power over what regulations that govern them.  Lobbying the government for favorable trade policies.  Without the appropriate regulations, the corporation would invest in a different country.  These regulations were sometimes claimed to prevent discrimination against foreign corporations, but ended up trying to gain favorable trade agreements.  Favorable policies included as access to cheap labor, and lack of environmental protection.

During the trade negotiations, the developing world was asked to remove their subsidies and open up their markets.  All the while the developed world kept markets closed, and kept the subsidies.

Globalization gave opportunities for corporations to avoid paying appropriate levels of taxes.  Corporations were able to locate in low-tax jurisdictions.  Governments competed to attract corporations with lower tax rates, a race to the bottom.  That meant that corporations received a trained labor force, infrastructure, and rule of law without having to pay for it.  All the while claiming corporate responsibility.  That also meant that the tax burden fell on the governments, which cut back government programs.

Everything from capital, people, and ideas were supposed to go to their most productive use, but what happened created instability and inequality.  Rather than have a distributive effect, those who gained from globalization rarely shared the gains.  Resulting in the disenfranchisement of large swaths of the population, in the developed world.  Generating high inequality and with few opportunities, and decreasing trust in government, elites, and media.

A major claim about globalization was that the number of jobs would increase.  And there were more jobs available in the export industries, but less jobs in the import industries.  The problem is that there were more jobs lost, than created.  Job creation was not actually the goal of globalization, the goal was to increase standard of living, by increasing productivity.  The labor market stability or growth is the goal of fiscal, and primarily monetary policy.  When fiscal and monetary policy are effective, they can offset the jobs lost by creating new jobs.

Under globalization, some nations have become dependent on help from others.  Although many countries benefited from globalization, what they realized is that it also brings with it risks outside of their control.  Trade agreements do end up with the countries losing a bit of sovereignty.  As they are not allowed to impose tariffs.  The action is reciprocal, for neither country can set up a tariff.  A slight loss, but with great rewards.  These actions sometimes cause disputes about the agreement, for which there are dispute resolution mechanisms, which facilitated in establishing an international rule of law.

Governments tend to provide incentives for individuals and firms to do what is wanted or reduce unwanted behavior.  Sometimes, government is participating in industries and functions that private enterprises could do better.  But, that does not mean forcing privatization would help.  Forcing privatization before safety nets caused mismanagement, and had a variety of adverse consequences.  Market solutions take time to arise, and people need timed to adjust to the market sentiments.  The shock of sudden changes in market sentiment can create a market failure.  Usually, government takes over functions because of a market failure.

The Exchange Rate, and Finance:

Exchange rates are partly influenced by market forces, but also the interest rate set by monetary policy.  When the United States told governments around the world not to interfere with the exchange rates, to let market forces determine it, what it meant in practice is that it wanted exchange rates to be determined by the U.S. central bank, the Federal Reserve.

When a country gets low interest on debt it holds of another, while borrowing at higher interest rates, it causes a transfer of money.  As the debt serving going into the country is smaller than the outflow.  In the case of globalization, this caused a transfer from poor countries to rich countries.  Solutions to known problems like the transfer of money from poor counties to rich were under consideration, from many except the United States.  The reason is that the United Sates benefited from that regime, while creating an alternative arrangement meant losing its advantage.

The financial system is meant to allocate capital, to make capital go where it can yield the highest return.  While monitoring how that capital is used.  Should the financial system break down, firms would not be able to obtain the capital needed to continue their operations, or expand their operations.  A bank failure, even during a financially stable era, makes it difficult for its former customers to quickly find alternative sources of credit.  The challenge is even more difficult in developing countries which have more limited sources of finance.

The International Monetary Fund (IMF) has the mission of maintaining global stability, and concerned about inflation.  What is missing from the IMF agenda is job creation, taxation, adverse effects, and many other national and international issues.

The IMFA is a public institution, funded by taxpayer money from various countries.  Although it is public, it is not very accountable to those who finance it or live under its affects, because it does not report to them.

The IMF functions by usually having a single temporary resident representative in the country.  IMF programs are dictated from Washington.  IMF reviews the macroeconomic situation of the country, and makes sure that the country is spending appropriately.  If not, that means the country is likely to have trouble going forward.

When there is a concern about foreign aid stopping for countries, the IMF does not lend them money.  Conditions on loans are meant to increase the chances of debt repayment.  But there are cases with IMF conditions actually reducing the likelihood of repayment.  The problem with the conditions that the IMF places on the debt, means that no poor country can spend money on anything it gets aid for.

The IMF does not like to dictates terms, and prefers to negotiate on the loan agreements.  But the countries asking of IMF help are desperate, making the negotiations one-sided.  Should a country disagree with an IMF recommendation, the loan can be withheld which would create a really big problem for the country in need.  The government officials therefor seem to agree with IMF recommendation, even though they do not agree.

The IMF has created a moral hazard problem, as the repeated bailouts have reduced the incentive for borrowers to repay their loans.

World Trade Organization (WTO) focus is on ending poverty.  WTO does not set rules, it provides a forum to discuss trade negotiations and enforcement of the agreements.  Functionally, they have a permanent staff in the country they are assisting.