Review of The Selfish Gene by Richard Dawkins

Book can be found in:
Genre = Science
Book Club Event = Book List (01/14/2023)
Intriguing Connections = 1) The Evolution of Evolution, 2) To Cooperate Or To Defect?,
3) Why Conflict Occurs And How To Resolve Them?, 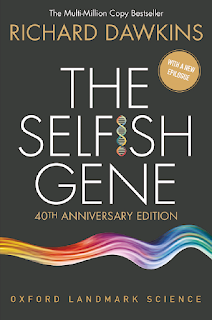 “Now, given that natural selection for selfish genes tends to favour cooperation among genes, it has to be admitted that there are some genes that do no such thing and work against the interests of the rest of the genome.” – Richard Dawkins, Introduction to 30th Anniversary Edition, Page 12

“To put it in a slightly more respectable way, a group, such as a species or a population within a species, whose individual members are prepared to sacrifice themselves for the welfare of the group, may be less likely to go extinct than a rival group whose individual members place their own selfish interest first.  Therefore the world becomes populated mainly by groups consisting of self-sacrificing individuals.” – Richard Dawkins, Chapter 1: Why are people?, Page 38

“It is possible for humans to enter into pacts or conspiracies that are to every individual uses his conscious foresight, and is able to see that it is in his own long-term interests to obey the rules of the pact.  Even in human pacts there is a constant danger that individuals will stand to gain so much in the short term by breaking the pact that the temptation to do so will be overwhelming.” – Richard Dawkins, Chapter 5: Aggression: Stability and the selfish machine, Page 106

Genes are selfish.  And in their selfishness, they cooperate.  Genes do not necessarily have to be obeyed.  Natural selection favors selfish genes to cooperate.  But even for an altruistic group, difficult to prevent an individual dissenter from being introduced, or developing.  An individual dissenter who is unwilling to sacrifice for the other individuals.  The selfish individual would them have higher chances of reproduction.  Producing more selfish individuals.  Over time, the altruistic group will gain more selfish members, and become indistinguishable from the selfish group.

The ratio of cooperators to defectors depends on group stability.  A group of only dissenters has less chance to survive than a group of cooperators, but a group of cooperators have limited ability to prevent dissenters.  A stable group, even a collection of atoms, are permanent enough or common enough.  Groups of atoms that obtain a stable pattern, tend to stay in the stable pattern.  This is the general law of survival of the stable.  In which survival of the fittest is a subset.  That species evolve by natural selection.  An idea that explains how complexity can arise from simplicity.  Earliest form of natural selection was the rejection of unstable groups of atoms, while maintaining stable groups.

Evolution, Natural Selection, and the Gene:

Molecules that survived a primordial chemical pool, had the property of being able to produce copies of itself.  A property that was highly improbable.  Not all copies are perfect replicas, as mistakes happen.  As copies are made from copies with errors, the errors cumulated.  Errors within copies is usually seen as substandard, but within genes, they can create improvements.  It is the mistakes and errors that make evolution possible.

Genes do not die or go senile.  They utilize a succession of mortal bodies.  Manipulating the body for self-interested purposes.  Genes replicator using the body as a survival machine.  DNA molecules are transient, but they do live on in copies.

Genes have a complicated way of controlling the body, and impossible to separate contributions to specific genes.  Sometimes a single gene controls a variety of biological aspects, sometimes an aspect is controlled by many genes. There are genes that work against the rest of the genome.  The environment impacts the effect of the gene.  Gene success depends on a more predictable environment.  The development of a capacity to learn came about as a means to compensate for lack of predictive power within unpredictable environments.

Altruism is when an individual aids the welfare of another, at its own expense.  Selfish behavior is when the individual benefits in welfare, at the expense of others.  Even a trivial survival probability can change the course of evolution.  Even within a group of altruists, there will be who dissent to make a sacrifice.

Groups composed of individuals willing to sacrifice themselves for other members of the group, have a higher chance of survival than a group containing individuals who place their own selfish interest first.

There are many examples of animals fighting in a restrained manner, as they do not provide a killing blow.  There is more to the restraint shown than just reduction in costs for time and energy.  Animal societies are complex systems in which it does not help the individual to kill all rivals.  Removing a rival, can even be more beneficial to other rivals than the individual.

The writing can be difficult.  Concepts about evolution, natural selection, and genes have advanced.  There are a variety of examples showcasing how evolution influenced various species.  Some of the examples are too theoretic and abstract, as they explain a potentially evolutionary stable concept.  There are practice examples as well.

Questions to Consider while Reading the Book
•What is the raison d’etre of the book?  For what purpose did the author write the book?  Why do people read this book?
•What are some limitations of the book?
•To whom would you suggest this book?
•Are genes selfish?
•Why cooperate?
•Why dissent from sacrifice?
•What are genes?
•What is a stable group?
•What is the law of survival of the stable?
•What is the survival of the fittest?
•Wat is evolution by natural selection?
•What impact to errors have on DNA?
•Are genes immortal?
•How do genes manipulate behavior?
•What is altruistic behavior?
•What is an evolutionary stable strategy?
•What happens to conspiracies?
•Do animals have restraint?
•Is there a difference the moral consideration for one’s own species and other species?
•What is the trouble with conspiracies?
•How are individuals with handicaps influence their reproductive capacity?
•Is there an objective basis for favoring certain species above others?
Book Details
Publisher:         Oxford University Press
Edition ISBN:  9780191093074
Pages to read:   307
Publication:     2016
1st Edition:      1976
Format:            eBook
Ratings out of 5:
Readability    3
Content          3
Overall           3