Review of 12 Rules for Life: An Antidote to Chaos by Jordan B. Peterson 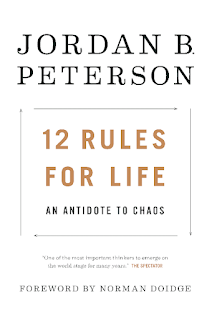 “No value, no meaning.  Between value systems, however, there is the possibility of conflict.  We are thus eternally caught between the most diamantine rock and the hardest of places: loss of group-center beliefs renders life chaotic, miserable, intolerable; presence of group-centered belief makes conflict with other groups inevitable.  In the West, we have been withdrawing from our tradition-, religion- and even nation-centered cultures, partly to decrease the danger of group conflict.  But we are increasingly falling prey to the desperation of meaninglessness, and that is no improvement at all.” – Jordan B. Peterson, Overture, Page 31

“The ancient part of your brain specialized for assessing dominance watches how you are treated by other people.  On that evidence, it renders a determination of your value and assigns you a status.  If you are judged by your peers as of little worth, the counter restricts serotonin availability.  That makes you much more physically and psychologically reactive to any circumstance or event that might produce emotion, particularly if its negative.” – Jordan B. Peterson, Rule 1: Stand Up Straight With Your Shoulders Back, Page 36

“Error necessitates sacrifice to correct it, and serious error necessitates serious sacrifice.  To accept the truth means to sacrifice – and if you have rejected the truth for a long time, then you’ve run up a dangerously large sacrificial debt.” – Jordan B. Peterson, Rule 8: Tell The Truth – Or, At Least, Don’t Lie, Page 236

Reality is vastly complex, while the human mind has limits to the mental bandwidth.  No matter how different, everyone is trying to make sense out of the complexity of reality.  Complexity is difficult to understand, especially in all things.  To get a grip on complexity, simplicity in many understandings is needed.  By having structure and rules, can habits be built by repeating behaviors.  Repeated acts that become automated, which makes them simplified, and predictable.  A disciplinary structure that facilitates competence in choices.  Freedom, requires constraints.

Rules are not meant to be restrictive.  They are meant to be liberating, and facilitate fulfillment of goals.    Rules that enable order within the lives of everyone, as everyone is dealing with uncertainty and chaos.  Complexity cannot be ignored, as confusion and suffering come from ignoring reality.  Each individual needs to manage the chaos of complexity, and the order of simplicity.  To manage the static and dynamic aspects of life.  To manage the continuous flux of interactions between the values of chaos and order.  New instabilities make way for new orders.

Ideology is cautioned against, for it simplifies the complexity of life.  Ideologues have a pretentious claim on having all the needed information, and how to resolve problems.  Ideologies substitute the complexity of reality, with a simplified understanding.  The complexity of the world becomes known when something that has been dependent on and invisible, no longer functions.

When individual’s understanding does not coincide with the reality faced, the individual needs to error correct decisions making.  Error corrections requires considering alternative possibilities.  To sacrifice prior beliefs, and behaviors to become better.  Those who are inauthentic continue with their acts, even with evidence of problematic outcomes.  Those who are authentic learn from experiences and errors, which allows them to adjust themselves for better outcomes.

Everyone has some values, and wants to learn.  A conversation is a mutual exploration of ideas.  Requiring reciprocity in listening and speaking.  Each trying to learn from the conversation.  But when trying to advise others, better to figure out how the advice impacts one’s own values and choices, before criticizing others.  Peterson welcomes challenges to Peterson’s ideas.  Peterson thinks through problems in a dialogic process.

Much like a conversation requires negotiation of values, friendship and loyalty are a negotiation.  The company someone keeps can brighten their life, or make them miserable.  The worthy friendships are those with individuals that want to help each other, and are willing to reciprocate the help given.  There is no obligation to help those who want to make the world worse.  Even with children, behavior should be restricted to prevent disliking them and rewarding misery with more misery.

Values are derived from the groups individuals belong to.  Individual get a sense of meaning from belonging.  But with different value systems comes the possibility of conflict.  Loss of values makes the individual’s internal life chaotic and miserable, while values generate external group conflict.  As the West withdrew from traditions and historical values to limit group conflict, the society has fallen to desperation of meaninglessness.

To justify existence, the individual needs to take responsibility.  To be part of a society with rules, standards, and values.  Humans are social animals, and produce value together.  For that, we need routines and tradition which create order.  Too much order is a problem, but so is chaos.  It takes a lot of effort to take responsibility for individual life, society, and the world.  Responsibility to breakdown values but also create them, in order to prevent or reduce suffering.  The alternative of chaos is worse for that leads to authoritarian beliefs, and purposeless individuals.

Much suffering comes not from external sources, but internal values.  The individual knowns all of their transgressions and inadequacies, making the individual not feel worthy of being helped.  Not seeking help when needed is a form of punishing oneself for failings.  To enable oneself to become better, the individual has to take make oneself worthy of being helped.  To take responsibility for their life.  Everyone has advantages, and disadvantages.  Everyone suffers in some way, and has pains.

Individuals take risk to obtain competence, which enables safety.  By taking away various risky activities, leads people to search for safety in other ways, such as looking for authoritarian leaders to make them safe.  Cannot trust policy makers motives.

Aggression has value.  Lack of aggression usually means avoiding problems, while sacrificing themselves for others without reciprocity.  Compliant people lack independence.  While violence is innate, peace needs to be taught.  Humans know the pain that can be inflicted on themselves, which provides an understanding on how to inflect pain on others.

Within many species which includes human species, the few take all the winnings.  The rest get barely anything.  Social status is an influencing factor in physical and psychological health.  Lower status members have more negative attributes, and emergencies.  Should not matter how others are doing, as that brings misery.  What should matter is how behavior and outcomes are compared to prior behaviors and outcomes.

This is a book full of examples, but has a lack of systemic explanation of the content.  Associating various ideas, from various sources, but they do not necessarily explain the claims that are made.  While the reasons behind a claim do not necessarily lead to the claim, the way the claims are used are also inappropriate, for they lack complexity and alternative potential outcomes.

Some of the rules and claims contradict each other.  They are internally inconsistent for to adhere to some, other rules need to be sacrificed.  In part this is a dynamic aspect of the static rules, and depending on the individual, some rules would take priority over others.  Putting the rules in practice will have conflict.

The author discusses society that loss their values, and the consequences of that omission.  The author tries to rectify that by bringing in values.  Values coming from a moral (religious) perspective.  The author in part recognizes and discusses the consequences of the moral perspective, but those views are underrepresented.  The moral perspective leads to self-affirmation of those values, rather than considering the possible alternative values and ways of thinking.  Within trying to provide values, there are many claims on cultural and social aspects, which are polarizing and underdeveloped.  They have errors of omission, which can legitimize terrible acts.

Questions to Consider while Reading the Book
•What is the raison d’etre of the book?  For what purpose did the author write the book?  Why do people read this book?
•What are some limitations of the book?
•To whom would you suggest this book?
•How complex is reality?
•What happens when complexity is denied?
•Why simplify reality?
•What are consequences of simplification?
•How to simplify reality?
•How to bring order to chaos?
•What are rules for?
•How can constraints make people free?
•What are ideologues ad ideologies?
•How to become better?
•Who is considered authentic, and inauthentic?
•How to have a conversation?
•Who is worthy of friendship?
•Why do people want to belong to groups?
•What are consequences of having values?
•What are consequences of not having values?
•What are sources of suffering?
•How and why do individuals take responsibility for their own life?
•Why do individuals take risks?
•What value does aggression have?
•How does social status impact health?
•Can there be equality between people?
•Are people social or antisocial?
•What is natural selection?  How does chaos and order apply to natural selection?
Book Details
Publisher:         Random House Canada [Penguin Random House Canada]
Edition ISBN:  9780345816047
Pages to read:   376
Publication:     2018
1st Edition:      2018
Format:            eBook
Ratings out of 5:
Readability    4
Content          3
Overall           2