Review of Tibet on Fire: Self-Immolations Against Chinese Rule by Tsering Woeser

This review was written by Eugene Kernes
Book can be found in:
Genre = Politics
Intriguing Connections = 2) What It Means to be an Activist, 2) The Persecuted and The Persecutors,
3) To Cooperate Or To Defect?, 4) Why Conflict Occurs A nd How To Resolve Them?,
5) The Motive, Method, Ideology, and Consequences of Intervention, 7) War for Your Attention,
8) Get To Know This Worlds' People, Regions, Cities, Nations, and Empires (China) 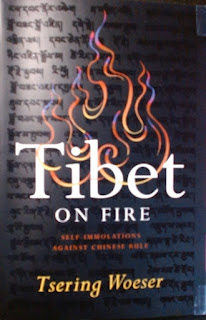 “the need to take action, and to make one’s voice heard in an environment in which there is no other means of doing so. ” – Tsering Woeser, Chapter 2: The Protestors, Page 41

“For decades, the Chinese state has proudly proclaimed that it “liberated” Tibet and “emancipated the serfs,” giving the Tibetan people the opportunity to lead a “happy life.”  But how can we account for the fact that half a century later these “liberated serfs” are standing up and even setting their bodies on fire to resist their “liberators”?” – Tsering Woeser, Chapter 3: State-Sponsored Slander and Media Blockades, Page 45

“self-immolators employ an extreme form of suffering, unbreedable for the average person, so as to embody the most powerful form of protest and recapture their human dignity.” – Tsering Woeser, Chapter 5: Self-Immolation as Protest, Page 85

The Chinese government has been trying to force their values and symbols upon the Tibetan people.  China demands the Tibetan people to renounce their faith, denounce their leaders, and change their lifestyles.  These actions have ignited the protests.  Although utilizing peaceful protests, the protestors have been unrelentingly suppressed by the Chinese government.  Peaceful protests that have been violently suppressed, in which people were killed.  Tibet has become a prison state enforced by armed military police, and surveillance.  Chinese see themselves as liberators, but the Tibetan people are protesting these liberators, and are even self-immolating themselves to resist them.

A Form Of Protest:

Although those committing self-immolation are Tibetan monks, their acts are asked not to be judged under Buddhism, but by their political results.  The self-immolators are protesting for taking action, supporting the Dali Lama, taking responsibility, national identity and solidarity, Tibetan independence, and protecting the Tibetan way of life.

Self-immolation is not about violence.  Tibetan people are restrained by religious beliefs and Dalai Lama’s stance on nonviolence.  Self-immolation declares that while the self can be annihilated, not one else is harmed.

There are disagreements within the monks on whom should self-immolate.  There is as ask for elderly people to self-immolate rather than the youth.  The youth have the potential to make further contributions to the people.  While the elderly are those who experienced various extreme persecution and torments.

Tibetan people have been under Chinese oppression since the 1930s.  As the passing Red Army plundered Tibet, and left it with food shortages while massacring the peoples.

Chinese government considers itself a liberator.  Claiming to have liberated Tibet, and emancipated the serfs.  An effort that gives Tibetan people an opportunity at a happy life.  Yet the liberated serfs are self-immolating themselves to resist the liberators.  Dalai Lama claims that China lacks legitimacy in Tibet, as China is unable to negotiation policies with the Tibetan people, and unable to gain Tibetan confidence.

Many Chinese people travel to Tibet for holidays, but only see the Tibetan tourist sites that the Chinese tour company wants them to see.  Tourists do not care much for the local peoples of the sites that they visit.

Although there is some history of Tibet from the 20th century, the book lacks a history on Tibet, and prior interactions with China.  There is also a lack of political understanding.  How the Tibetan people are oppressed is expressed, but not the why.  Not much is provided on explaining what China wants from Tibet and the Tibetan people.  Learning how China benefits from their political activities in Tibet, can provide an understanding for how to potentially negotiate with China and Tibet.

There are common references to Buddhism being a dominant way of thinking and living within Tibet.  Some interactions between Buddhism and the political claims are made, but there is a lack of details about how Buddhism is incorporated in the Tibetan way of life.  An understanding of Buddhism would have clarified the political actions being taken.

The acts of self-immolation appear to be decentralized, while the Chinese government claims that they are a centralized organization.  Maybe actually making the protests more centralized and organized would be a better alternative.

Questions to Consider while Reading the Book
•What is the raison d’etre of the book?  For what purpose did the author write the book?  Why do people read this book?
•What are some limitations of the book?
•To whom would you suggest this book?
•Why are Tibetan people protesting against China?
•How to Tibetan’s protest?
•Why did self-immolation start?
•What does self-immolation symbolize?
•Under what conditions do Tibetan people live under?
•How to does the Chinese government respond to the protests?
•How does Chinese government see themselves within Tibet?
•How did China and Tibet interact historically?
Book Details
Publisher:         Verso [New Left Books]
Edition ISBN:  9781784781538
Pages to read:   98
Publication:     2016
1st Edition:      2016
Format:            Paperback
Ratings out of 5:
Readability    5
Content          4
Overall           5