Review of Life After Google: The Fall of Big Data and the Rise of the Blockchain Economy by George Gilder

Book can be found in:
Genre = Economics, Business
Book Club Event = Book List (10/29/2022)
Intriguing Connections = 1) The Entrepreneurial Spirit, 2) How To and Not To Run a Business,
3) How Products Shape and Change the World, 4) When Intelligence Goes Wrong 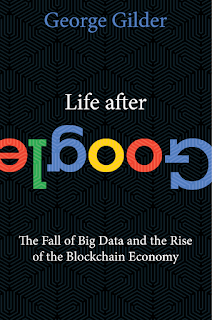 “Google understands that most advertising most of the time is value-subtracted.  That is, to the viewers, ads are overwhelmingly minuses, or even mines.  The digital world has accordingly responded with ad-blockers, ad-filters, mutes, Tivos, ad-voids, and devices to help viewers escape the minuses, the covert exactions, that pay for their free content.” – George Gilder, Chapter 3: Google’s Roots and Religions, Page 38

“While most of us welcome “free” on the understanding that it means “no charge,” what we really want is to get what we ordered rather than what the authority chooses to provide.  In practice, “free” means insecure, amorphous, unmoored, and changeable from the top.” – George Gilder, Chapter 5: Ten Laws of the Cryptocosm, Page 50

“Midas’s error was to mistake gold, wealth’s monetary measure, for wealth itself.  But wealth is not a thing or a random sequence.  It is inextricably rooted in hard won knowledge over extended time.” – George Gilder, Chapter 8: Markov and Midas, Page 93

There are many technology companies, but it is Google’s product of information distribution that has become ubiquitous.  Giving Google vast influencing power over the economy, and policies.  Providing seemingly free products.  Paying for them not with money, but with something far scarcer, time.  Directing attention away from the wanted content, with distracting advertisements.  Collecting a lot of data on the users which can be used for improvements, but the data is also centralized which attracts thieves.  While not providing enough security, for the product is free.  Free products that also attract malware.

There is a trend to utilize algorithms, and develop Artificial Intelligence.  Seen as superior to the brain.  Which makes humans appear to be substandard and useless.  But AI cannot think, as AI needs human intelligence to program it.  AI needs humans to structure information for AI to learn.  Humans provide the goals and targets for AI to obtain an output.  Algorithms are logical machines that have deterministic outcomes.  But wealth is created from knowledge based on informational discoveries and surprises.

Advertisements, And Consequences Of Free Products:

Google followed an unconventional strategy of making its content and information free.  Making information part of a commons, available to all.  Google wanted to organize the world’s information, and make it available.  This would have also displaced existing advertising regime.

Nothing is ever free.  Rather than paying for products with money directly, people are paying for products with their attention.  Time is the ultimate scarcity.  Time is what customers pay with free products.  People welcome free when it means no charge, but what is wanted are the ordered content, rather than the content the authority chooses to provide.  In economics, money measure scarcity of time.

Advertising is usually value-subtracting.  Advertising distracts from watching content.  Many products arose to prevent advertising, the source of the free content.  What Google did was try to use search results, to have viewers see the advertising that they wanted to see.  Transforming advertising into valuable information.  Based on measurement of advertisement effectiveness and quality, advertisers were forced to improve their advertising or remove those that were ineffective.  Google itself created an ad-blocker, which would apply to ads condemned by the Coalition for Better Ads.  Blocking ads it deemed inappropriate, which might be an illegal act for a search engine.  Ad-blocking is detrimental to the unwanted advertisement industry.

Not charging for software services, means avoiding liability for buggy products.  Free products avoid liabilities to real customers, such as preventing development of appropriate security.  Free products are not stolen, therefore do not develop measures to prevent hacking and theft.  Security of information is delegated to the customers.

Within the industry of AI, there are claims that machines will be much smarter and have access to more multidimensional data, that individuals would want to delegate their decisions to the machine.  Everything becomes seen as an algorithm that can be controlled through machine learning.  For the AI industry, the superiority of AI algorithm intelligence is making human intelligence inferior and the humans unemployable.  As AI is making homo sapiens obsolete, there are Silicon Valley leaders who favor federally guaranteed annual income to compensate those who are obsolete.  Making more and more people who are unemployed forever.  AI is incredible technology that can improve human life.  The problem is the human mind is seen as a sub-optimal computer, meant to evolve into a silicon based superior machine.

Marxism started with a belief that the industrial revolution solved many problems of production.  Although the ideology has become known for revolutionary methods of rectifying workers grievances.  Silicon Valley has a neo-Marxism trend of repeating the same error as prior Marxists, that of making human labor and mind obsolete.  A world in which the machine supplement human activities is a utopian vision from Silicon Valley.  Ironically, the vision is shared by their critics who have a dystopian view.  The collaboration between utopian and dystopian views is possible because of Google’s monopoly of information and intelligence.

Computer power has become delegated to centralized propriety clouds, moving more data between distances without degradation.  Computers have become cheaper because of this delegation.  The “cloud” is an external hard drive for collecting a gargantuan amount of data, containing processors, connected by fiber-optic lines that consume immense amount of electrical power with the outcome of radiating immense amount of heat.

Gödel argued that all logical systems had a variety of paradoxes.   Logical systems depended on unproved propositions.  Consistency was no assurance that the system was correct.  Gödel’s Incompleteness Theorem precipitated the creation of a mathematics of information.

Path to knowledge in a logical machine is deterministic and dictatorial.  The machine can potentially gather and process data quickly using a combination of algorithms to produce a single outcome.  A centralized processor of all data gathered under a single operator.  As private data is oppositional to how Google wants to process all data, then Google’s claims about wanting privacy are inconsistent with what it wants.

Deterministic logic prevents surprises that enable discovery and creation.  Technology needs to transcend deterministic mathematic logic to make progress.  Deterministic machines are free from surprise, as the answers are implicit in the question.  But information is surprise, the discovery of the unexpected.  Within information theory, order defines the expected, but there are degrees of freedom in the message that allow for entropy.

Consciousness depends on faith for it acts even without full knowledge and therefore obtains surprises.  Machines lack consciousness, lacking surprises.  A logical system that is incomplete and needs an oracle.  Knowledge of the incompleteness is the human condition, manifested in consciousness.

Gold was mistaken to be wealth by Midas.  Gold is the monetary measure of wealth, but not wealth itself.  Wealth is not a thing or random sequence.  Wealth is knowledge accrued over time.  Knowledge is the source of wealth.  Knowledge provides the understanding on how to utilize matter, and improve upon prior knowledge.

Many firms are using algorisms to make a profit.  Firms within the financial industry make trades that make no sense because of algorisms, but these trades do create profit.  Without understanding the reason for success, then no knowledge is added to improve and provide productive investments.

Knowledge and learning are the mechanisms by which wealth is created within capitalism.  Rather than create wealth, wealth is being distributed in a zero-sum game.  Knowledge is created with laboriously investigations within companies, but the Securities and Exchange Commission has made inside trading illegal.  Which moved trading to algorithmic formulas because a computer cannot be indicted, although no creative investment is made either.

Universities make a fortune by selling a paper that comes at great cost to people.  Students obtain massive debts while preventing them from becoming entrepreneurs that would enrich future generations.

Although there are people making claims about the superiority of the machines over their limited human customers, the breakdown of the security system reduced the worth of the machines.  Nations with better security systems are becoming more prominent.  Security is a fundamental, basic, and indispensable component of information technology for the services they provide, rather than a benefit from retro-fixes.

Centralization of data informs hackers where the most important data is, putting everyone at risk.  Centralization makes information vulnerable to manipulation and theft by those in power.  An alternative would be to have power and information distributed in a peer-to-peer system.  The author predicts that the centralized and free information that collect customer data are not likely to survive distributed peer-to-peer technology, which has been termed a cryptocosm.

Gold provided a stable economic foundation that could be used to plan for long term projects without fear of inflation due to counterfeit money or fiat money that erodes future payments.  Without the gold standard, money does not have an external frame of reference.  Money has become a self-referential logical system that can be manipulated by central banks for their governments.

Bitcoins is like a precious metal which has a predetermined supply.  Demand by users changes its value.  A recognized but illusive originator of bitcoin is Satoshi.  But Satoshi is nowhere to be found.  The lack of leadership means that there is no third party that governments or hackers can infiltrate.  Without taking control of bitcoin, there is distributed security.

Cryptocurrencies provide for anonymous exchange and security needed for transactions.  They also provide proof of record needed to defend against governments and businesses spurious claims.

Successful firms utilize extensively their era’s abundant resource designated by declining prices, while saving the scarce resource.  Data and bandwidth have become the abundant resource, while customer patience is scarce.

Applications tend to lock people in them.  People provide them with lots of information, but need to petition to move their information to another application.

Some caveats for the book includes that the book is less about Google, and more about how the internet functions.  Google provides and controls a major internet function.  A company whose actions influence how other functions operate, and the policies that regulate how other companies behave.  Showcasing the negative consequences of how the internet operations, and the alternative methods that are taking root.

There is a lot of esoterica in the book.  Would help understand the content if the reader already knows the esoterica.  Among the ideas, there is a poor transition between topics, and a lack of explanation for some claims.  Related content is sporadically placed which makes it difficult to put together into a coherent understanding.

Questions to Consider while Reading the Book
•What is the raison d’etre of the book?  For what purpose did the author write the book?  Why do people read this book?
•What are some limitations of the book?
•To whom would you suggest the book?
•Why is Google the target of this book?
•What do free products provide?
•How are free products paid for?
•How is data centralization used?
•What are the benefits and consequences of algorithms and artificial intelligence?
•What is wealth?
•How is knowledge generated?
•What value do advertisements provide?
•What impact do ad-blockers have?
•Why is security lax?
•What are the limits to artificial intelligence?
•What is the cloud?
•What is Gödel’s Incompleteness Theorem?
•What is the cryptocosm?
•What is blockchain?
•What are cryptocurrencies?
•What is the value of an education?
•How does Google manage bandwidth?
•How did John von Neumann influence the digital (information) age?
•Can superior intelligences be governed?
•Where does value come from a network?
Book Details
Publisher:         Regnery Gateway [Salem Media Group]
Edition ISBN:  9781621576136
Pages to read:   268
Publication:     2018
1st Edition:      2018
Format:            eBook
Ratings out of 5:
Readability    4
Content          4
Overall           4