Review of On Obligations by Marcus Tullius Cicero

Book can be found in:
Genre = Philosophy
Book Club Event = Book List (01/07/2023)
Intriguing Connections = 1) To Cooperate Or To Defect?,
2) Why Is Behavior of Individuals Different When They Are in A Group?,
3) Get To Know This Worlds' People, Regions, Cities, Nations, and Empires  (Roman Empire) 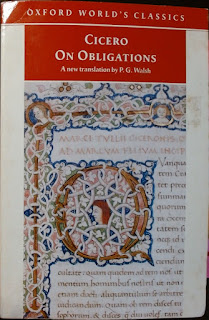 “Furthermore, when we are enjoying success and things are going our way, we must make strenuous efforts to avoid arrogance, contempt, and disdain.  It is a mark of instability to be intemperate in the face of success no less than in adversity.  It is a splendid thing to remain level-headed in every condition in life, and to show the same demeanour and outlook at all times.” – Cicero, Book 1, Page 31

“We should accordingly treat other people – not just the best of them, but also the rest – with a modicum of respect.  Disregard for what others feel about you is a mark not merely of conceit but also of lack of integrity.  Mind you, there is a difference between justice and deference when taking stock of other people.  It is the role of justice not to wrong them, but of deference to avoid bruising them; the impact of the fitting is especially notable here.” – Cicero, Book 1, Page 34-35

“Such men with erroneous judgement have their eyes fixed on the rewards which attend on their actions, but not on the penalty which they pay.  I refer not to punishment under the laws, which they repeatedly violate, but to that imposed by their own base conduct, punishment which is the bitterest possible.” – Cicero, Book 3, Page 96

Each individual has obligations to the community they belong to.  Obligations to not harm others directly, and not allow inaction to cause harm to others.  Those attempting to not concern themselves with others do prevent potentially harming others.  But, as they prevent committing an injustice of commission, they are committing an injustice of omission.  As they desert community life, they do not contribute anything to the community.

Foundation of justice is adherence to good faith in interactions, to not exploit others for profit.  Individuals are meant to be useful to human community, without restricting obligations to those close to them.  But being useful must not come at the expense of exploiting the rest of the world.  Justice overrides that which can be useful.  For useful activities that contain shameful elements should be rejected.  Rejected even if the reprehensible behavior will not be made public.

The job of the philosopher is meant to teach obligations.  To teach about the behaviors that each member in the community has to other members, and even beyond the community.  That requires teaching about what is useful, honorable, and justice.  There are behaviors which should be done because they are honorable.  Praiseworthy behavior that should be done even within anyone praising the behavior.

There are those who undermine obligation by assuming a supreme good, which is not connected with virtue.  Philosophers undermine social obligation by using their self-interest as a measurement for what is honorable.  What that means is that friendship, generosity, and justice cannot be cultivated if they are not aligned with the philosopher’s perspective.

Just behavior comes from preventing harm on others with the exception to an aggressor, and that individuals should observe the common good.  Not even friendship overrides justice.  Protection of interests needs to come without damaging others.  Politicians should not promote advantages when they come about by hurting other communities or with dishonorable policies.  Even within commerce, merchants are meant to declare defects in the products.  Corruption comes about from those proclaiming to be doing good and useful activities, but utilize inappropriate behaviors and policies.

Roots of injustice come from fear, greed, and lust for dominance and fame.  Sometimes injustices are justified when committing a harm to prevent more harm.  There are individuals who seek the rewards of actions, but ignore the consequences of their actions.  Law can be escaped by those who harm, but they cannot escape the knowledge of what they had done.  A constant reminder of the harm they have committed.  Better to avoid those who do not have regrets over harm done, or that the harm done was appropriate or justified.

Cicero uses Caesar as the example of not just behavior.  Caesar treated Cicero generously, but understood Cicero’s disdain for Caesar.  Cicero saw Caesar as the individual responsible for the fall of the Roman Republic.

Decisions are difficult and have many uncertainties about their use and impact.  Many question whether their decision is appropriate or reprehensible.  The following issue with decisions is whether they are useful, if the decision is beneficial to them.  The third issue is the conflict between what is useful and what is just.  These are issues within decision making that can be paralyzing and cause indecision.  A conflict between what is honorable and useful, which needs resolution.  When there is uncertainty whether a decision is appropriate or not, better to be patient and clear up the uncertainty.  Fairness within decision clears up uncertainty.

How To Treat Others:

The individual judges oneself differently then when judging others.  Everyone should be treated with at least some respect, and avoid harming their self-worth.  A lack of integrity is shown when disregarding what others think of oneself.

Considering the welfare of others and being generous towards them, should not go beyond the resources available for appropriate distribution to close individuals and their futures.  Excess generosity does not come from generosity or honorable conduct but is disguised as such.  Excess generosity has its own self-interested motivations.

Success must not come along with arrogance, contempt, and disdain.  Appropriate behavior and retaining a dignified character are the desired attributes.  Decision making changes during success, making it important to utilize advice of those trusted, while being careful of those who flatter and deceive.  Many make grievous errors by taking the advice of those who flattered their ego.

Justice, Even In Time Of War:

Even within warfare, there are decisions which must be upheld by the state.  Military disputes can be settled by negotiation or by force.  Within civil societies, force is allowed if negotiation is not possible.

Just war comes about after due warning and demands for satisfaction are provided.  Wars are meant to be used as tools for living peaceably without suffering injustice.  The defeated are to be spared and forgiven, unless they committed terrible injustices.

A difficult book to read because of the era in which it was written in.  The era also makes the many references, not readily familiar.

Many of the claims that Cicero provides need to be adjusted for they carry ambiguity.  The claims have philosophical paradoxes and additional contextual complications.  Even Cicero recognized the complexity of the claims, and tried to guide the reader in how to overcome them.

Questions to Consider while Reading the Book
•What is the raison d’etre of the book?  For what purpose did the author write the book?  Why do people read this book?
•What are some limitations of the book?
•What are the obligations that community members have towards each other?
•What are injustices of commission, and injustices of omission?
•Why is there a need for individuals to be useful to the community?
•What is justice?
•What happens when justice and being useful are in conflict?
•Why is the purpose of philosophers?
•How can philosophers betray the ideas of obligations?
•What is the purpose of knowledge?
•What are just behaviors?
•Why is injustice committed?
•Why is there uncertainty in decisions?
•How does success change the way decision making is made?
•Can there be a just war?
Book Details
Publisher:         Oxford University Press
Edition ISBN:  0192839683
Pages to read:   171
Publication:     2001
1st Edition:      44 BCE
Format:            Paperback
Ratings out of 5:
Readability    3
Content          2
Overall           2