Review of Beyond Order: 12 More Rules For Life by Jordan B. Peterson 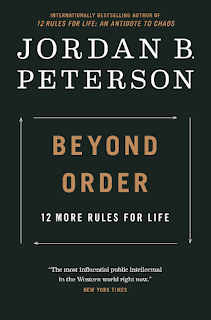 “People depend on constant communication with others to keep their minds organized.  We all need to think to keep things straight, but we mostly think by talking.” – Jordan B. Peterson, Rule I: Do Not Carelessly Denigrate Social Institutions Or Creative Achievement, Page 26

“The relationship between this brilliant dramatic representation and how we use, or misuse, the gifts of our culture is obvious: the careless demolition of tradition is the invitation to the (re)emergence of chaos.  When ignorance destroys culture, monsters will emerge.” – Jordan B. Peterson, Rule II: Imagine Who You Could Be, And Then Aim Single-Mindedly At That, Page 76

“Leaving everything hidden in the fog because you are afraid of the danger you may find there will be of little help when fate forces you to run headlong toward what you have refused to see.” – Jordan B. Peterson, Rule III: Do Not Hide Unwanted Things In The Fog, Page 106

Mental health depends on more than just the individual, for sanity has been delegated to society.  Communication with others maintains the brain and keeps the mind organized.  Thinking is mostly done through talking.  Talking about the past and future clarifies what matters and how to proceed.  Talking about behaviors informs the appropriate ways to judge others.  Social feedback reminds of appropriate behavior, with deviations getting negative reactions.  Physical and mental health depends on interactions, even with close relations.   Requiring continuous negotiations with the partner to maintain peace.

Laws create order needed for social cohesion, but cannot perfectly codify the complexity of behavior and contexts.  Even with important rules, rigid rule following causes problems.  Creation comes from the chaos of deviating behaviors.  Dynamic responses that facilitate change.  Tolerance is needed for the order of law, and the chaos of deviation.  Stability and change are outcomes of the interactions of social institutions and need to be managed to find the appropriate mixture of order and chaos.

Traditions and cultures inform behavior.  Carelessly destroying the culture brings with it chaos, inappropriate behavior.  Genuine authority constrains arbitrary exercise of power, because the authoritative agent cares for those within the agents responsibility.  Someone needs to take responsibility for getting things done, and by doing so, they create opportunities for them.

No individual has complete knowledge of anything.  But ideologues have a pretentious claim on having that amount of knowledge.  This is a totalitarian claim on knowledge, which facilities problematic behavior when prediction fail to materialize.

Autonomous consciousness needs to be built, and requires the individual to make their own mistakes and learn from them.  By being overprotective to others, the individual weakens their character.  Individuals need to learn what they hate doing, so that they can avoid doing the things that they hate, to avoid making a miserable life.  Individuals also need to build skills which require dedication and hard work.

Individuals are more complicated than simply good or evil.  A simplifying division used for justification of self-righteous hatred.  A division purposely creating terror that leads to conflict and destruction.

A relationship requires constant negotiation with the partner.  The arrangement is not a zero-sum game, but relationship needs many coordination activities.  Negotiation means figuring out how both partners can help each other.  Without negotiating peace, each partner will slowly aggravate each other causing conflict.

The book is filled with examples that try to define reasons for a claim, but not enough explanations of the content.  The reasons for the claim do not necessarily lead to the claim.  The use of the claims can be exaggerated, and create contradictions with other claims being made.

Questions to Consider while Reading the Book
•What is the raison d’etre of the book?  For what purpose did the author write the book?  Why do people read this book?
•What are some limitations of the book?
•To whom would you suggest the book?
•What is needed for mental health?
•What is communication used for?
•Why are laws needed?
•Why is deviation behavior needed?
•How to manage order and chaos?
•How does culture work?
•How to resolve problems?
•What are sins of commission, and sins of omission?
•What is genuine authority?
•What is an ideologue?
•What happens to those overprotected?
•How to build skill?
•How does writing impact memory?
•How to maintain a relationship?
Book Details
Publisher:         Portfolio [Penguin Random House]
Edition ISBN:  9780593084656
Pages to read:   308
Publication:     2021
1st Edition:      2021
Format:            eBook
Ratings out of 5:
Readability    4
Content          2
Overall           2