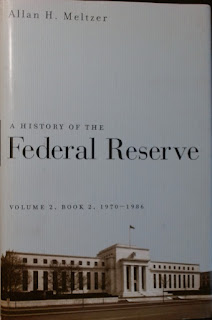 “The Bretton Woods system of fixe but adjustable exchange rates broke down because no major country or group of countries was willing to subvert domestic policy to improve international policy.  Exchange rate stability was a public good; no country was willing to pay much to supply it.  The United States chose to maintain high employment even if its policy required rising inflation, as it did after 1965.” – Allan H. Meltzer, Chapter 5: International Monetary Problems, 1964-1971, Page 754

“Friedman and Schwartz (1963) emphasize the importance of money growth and inflation.  Their work was well known but largely ignored by most members of FOMC.  Economists in the Nixon administration understood the importance of money growth for inflation but yielded to political pressures.” – Allan H. Meltzer, Chapter 7: Why Monetary Policy Failed Again in the 1970s, Page 860

“the Volcker FOMC, Volcker himself, and his successor Alan Greenspan put greater weight on inflation control.  Interest rates increased at times during recessions or periods of rising unemployment if needed to control inflation.   By 1994 the Federal Reserve finally accepted monetarist criticism and adopted counter-cyclical policies by reducing money growth during expansions and raising it during contractions.” – Allan H. Meltzer, Chapter 9: Restoring Stability, 1983-86, Page 1206-1207

During this era, the Federal Reserve had to deal with high unemployment and high inflation, known as stagflation.  Myopic in policy, which produced temporary economic fixes.  The short-term seemingly random policy changes were made without much concern for long-term consequences of its actions.  There was more pressure on lowering unemployment than inflation, which caused the government to stimulate the economy while reducing pressure on anti-inflation programs.  Errors in understanding the interactions between economic factors precipitated in procyclical bias.

The Federal Reserve learned from its experiences, and made changes such using different economic models for decision making, and changing how they interact with the economy and citizens.  During 1975, Congress tasked the Federal Reserve to publicly announce a 12-month money growth target, have long-term policies for economic production, and make reports to Congress at open hearings before the banking committees.  Volcker, and successors, changed how the Federal Reserve operated by focusing more on inflation control, and using counter-cyclical money growth policies.

There was conflict between domestic and foreign objectives.  Governments were not willing to sacrifice domestic policy of lower unemployment for international policy.  Much like many nations, the United States focused on high employment even at the expense of inflation.  Citizens choose temporary unemployment over wage reduction, making wages sticky.

Controlling inflations requires patience and persistence, which the Federal Reserve lacked during the era.  Lacked long-term objectives, and ability to achieve them.  There was research and ideas about managing money growth and information.  They were ignored by the FOMC, while government economists accepted them.  Even though government economics accepted that money growth led to inflation, it yielded to political pressures.  Monetary policy had managed economic factors to maintain economic stability when the Federal Reserve started to reducing volatility of output and limiting inflation.