Review of Think Like a Freak by Steven D. Levitt, and Stephen J. Dubner

Book can be found in:
Genre = Philosophy, Epistemology
Book Club Event = Book List (09/03/2022)
Intriguing Connections = 1) Why Do People Think Differently?, 2) How to Teach? How to Learn?,
3) Ways To Help Oneself and Life Lessons,
4) Why Is Behavior of Individuals Different When They Are in A Group? 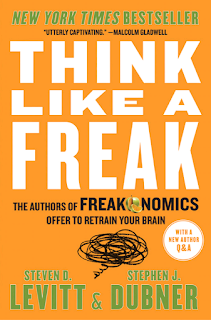 “The fact is that solving problems is hard.  If a given problem still exists, you can bet that a lot of people have already come along and failed to solve it.  Easy problems evaporate; it is the hard ones that linger.  Furthermore, it takes a lot of time to track down, organize, and analyze the data to answer even one small question well.” – Steven D. Levitt, and Stephen J. Dubner, Chapter 1: What Does It Mean to Think Like a Freak?, Page 11

“But a lot of obvious ideas are only obvious after the fact – after someone has taken the time and effort to investigate them, to prove them right (or wrong).  The impulse to investigate can only be set free if you stop pretending to know answers that you don’t.  Because the incentives to pretend are so strong, this may require some bravery on your part.” – Steven D. Levitt, and Stephen J. Dubner, Chapter 2: The Three Hardest Words in the English Language, Page 42

“An opponent who feels his argument is ignored isn’t likely to engage with you at all.  He may shout at you and you may shout back at him, but it is hard to persuade someone with whom you can’t even hold a conversation.” – Steven D. Levitt, and Stephen J. Dubner, Chapter 8: How to Persuade People Who Don’t Want to Be Persuaded, Page 128