Review of America Beyond Capitalism: Reclaiming Our Wealth, Our Liberty, and Our Democracy by Gar Alperovitz

Book can be found in:
Genre = Economics
Intriguing Connections = 1) Capitalism, Socialism, their Alternatives and Critiques,
2) The Impact of Inequality.
3) Get To Know This Worlds' People, Regions, Cities, Nations, and Empires (United States of America) 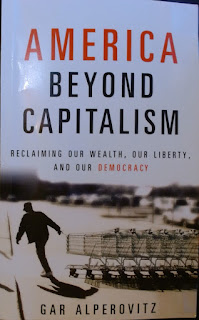 “I mention these personal facts to underscore several critical aspects of the lessons of Youngtown – ad my reasons for writing a book that argues that it is not only necessary but possible to “change the system”” – Gar Alperovitz, Preface, Page vi

“We often ignore this truth, thinking that what counts is “the message” or “how issues are framed” for public consumption.  What ultimately counts is a coherent and powerful understanding of what makes sense, and why – and how what makes sense can be achieved in the real world.  By “coherent” I mean rigorous intellectually as well as politically” – Gar Alperovitz, Preface, Page ix

“The question is not the capacity of citizens to understand.  It is not even whether writers or thinkers take the time to explain themselves.  What opens people to making the effort is that they are forced to abandon the pose that politics doesn’t matter, and that ideas are irrelevant.” – Gar Alperovitz, Preface, Page xi

Review
Overview:
The capitalist system has produced many ailments such as increased inequality, and less freedom.  Changing the system is not only needed, but possible.  To change the system means accepting that politics and ideas are relevant factors.  Cannot avoid politics for during the 20th century, government has grown massively relative to the economy.  But national policy is no longer enough for large scale problems, while are too large for small problems.  Municipal, local governments are dominated by local business communities.  Decision makers in those communities have influence over policies, which makes it important who the shareholders are.  Many businesses have become employee-owned.  With direct ownership of outcomes, workers work much harder and with more enthusiasm.
Caveats?
Some explanations are assumed rather than explained why they matter.  A lot of statistics are provided, but not their impact on social organization.  Claims sometimes lack complexity and political understanding, with the simplifications making the favored claims appear much better without negative consequences.  The simplifications are sometimes also given a moral argument, which makes anyone who opposes the claims or considers complexity appear amoral.
Questions to Consider while Reading the Book
•What is the raison d’etre of the book?  For what purpose did the author write the book?  Why do people read this book?
•What are some limitations of the book?
•Why is there a need change the capitalist system?
•What are the alternatives to the capitalist system?
•How the capitalist system be changed?
•Why cannot politics be avoided?
•What is the impact of government?
•How can democracy be improved?
•What happens when the employees own the business?
Book Details
Publisher:         John Wiley & Sons
Edition ISBN:  9780471790020
Pages to read:   251
Publication:     2005
1st Edition:      2005
Format:            Paperback
Ratings out of 5:
Readability    3
Content          3
Overall           2
at July 25, 2022