Review of Japanese Culture: The Religious and Philosophical Foundations by Roger J. Davies 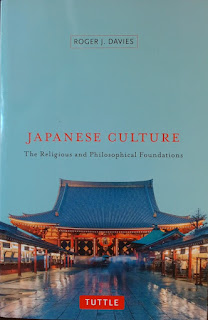 “Chinese influence was a persistent, increasing, and overwhelming factor of early Japanese life starting from the first century BC.” – Roger J. Davies, The Origins of the Japanese, Page 19

“The present is mirrored in the past, and the past exits in the present in the unconscious cultural heritage of a people, in the structure of their social and political institutions, and in the value systems they have created.” – Roger J. Davies, Approaches to Japanese Cultural History, Page 25-26

“Organizationally and ideologically, a number of religions have co-existed since ancient times, and they still remain separate and distinct systems.  On the other hand, when viewed from the participation of the individual, a merger or combination of religious beliefs seems to occur.” – Roger J. Davies, Approaches to Japanese Cultural History, Page 32