Review of Never Split the Difference: Negotiating As If Your Life Depended On It by Chris Voss

Book can be found in:
Genre = Economics, Behavioral
Book Club Event = Book List (07/23/2022)
Intriguing Connections = 1) Why Conflict Occurs And How To Resolve Them?,
2) To Cooperate Or To Defect?, 3) Why Do People Think Differently?,
4) War for Your Attention, 5) Ways To Help Oneself and Life Lessons, 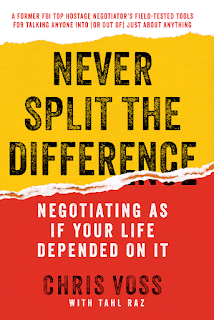 “The first step to achieving a mastery of daily negotiation is to get over your aversion to negotiating.  You don’t need to like it; you just need to understand that’s how the world works.  Negotiating does not mean browbeating or grinding someone down.  It simply means playing the emotional game that human society is set up for.  In this world, you get what you ask for; you just have to ask correctly.  So claim your prerogative to ask for what you think is right.” – Chris Voss, Chapter 1: The New Rules, Page 21

“In negotiation, each new psychological insight or additional piece of information revealed heralds a step forward and allows one to discard one hypothesis in favor of another.  You should engage the process with a mindset of discovery.  Your goal at the outset is to extract and observe as much information as possible.  Which, by the way, is one of the reasons that really smart people often have trouble being negotiators – they’re so smart they think they don’t have anything to discover.” – Chris Voss, Chapter 2: Be a Mirror, Page 26

“In every negotiation, in every agreement, the result comes from someone else’s decision.  And sadly, if we believe that we can control or manage other’ decisions with compromise and logic, we’re leaving millions on the table.  But while we can’t control others’ decisions, we can influence them by inhibiting their world and seeing and hearing exactly what they want.” – Chris Voss, Chapter 4: Beware “Yes” – Master “No”, Page 74