Review of Caste: The Origins of Our Discontents by Isabel Wilkerson

Book can be found in:
Genre = Sociology
Book Club Event = Book List (08/06/2022)
Intriguing Connections = 1) The Persecuted and The Persecutors, 2) To Cooperate Or To Defect?,
3) Why Conflict Occurs And How To Resolve Them?, 4) Why Do People Think Differently?,
5) Why Is Behavior of Individuals Different When They Are in A Group?,
6) Get To Know This Worlds' People, Regions, Cities, Nations, and Empires (United States of America) 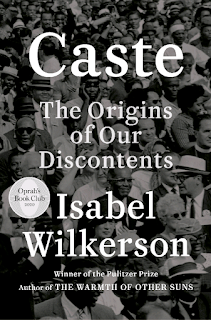 “Though Aryan himself, his openness to the humanity of the people who had been deemed beneath him gave him a stake in their wellbeing, their fates tied to his.  He could see what his countrymen chose not to see.” [Source Italics] – Isabel Wilkerson, The Man in the Crowd, Page 11

“As we fill out the pages of our medical past and our current complaints, what our bodies have been exposed to and what they have survived, it does no good to pretend that certain ailment shave not beset us, to deny he full truth of what brought us to this moment.  Few problems have ever been solved by ignoring them.” [Source Italics] – Isabel Wilkerson, The Vitals of History, Page 24

“A caste system is an artificial construction, a fixed and embedded ranking of human value that sets the presumed supremacy of one group against the presumed inferiority of other groups on the basis of ancestry and often immutable traits, traits that would be neutral in the abstract but are ascribed life-and-death meaning in a hierarchy favoring the dominant caste whose forebears designed it.” – Isabel Wilkerson, Chapter Two: An Old House and an Infrared Light, Page 28