Book can be found in:
Genre = Novel
Book Club Event = Book List (08/13/2022)
Intriguing Connections = 1) Some Type of Romance, 2) To Cooperate Or To Defect?,
3) Capitalism, Socialism, their Alternatives and Critiques, 4) How To Allocate Resources? 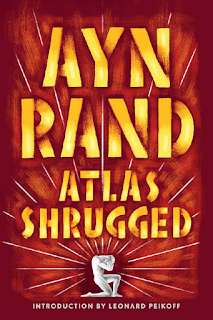 “”Nobody expected Colorado to become an industrial state.  How can we have any security or plan anything if everything changes all the time?”” – Ayn Rand, Part 1: Chapter 1: The Theme, Page 24

“”Speaking of progressive policies, Orren,” said Taggart, “you might ask yourself whether at a time of transportation shortages, when so many railroads are going bankrupt and large areas are left without rail service, whether it is in the public interest to tolerate wasteful duplication of services and the destructive, dog-eat-dog competition of newcomers in territories where established companies have historical priority.”” – Ayn Rand, Part 1: Chapter 3: The Top and The Bottom, Page 66

Review
Overview:
There are many strikes of labor.  This is a story about the strike of the mind.  When those with a mind are persecuted and blamed for all problems while still forced to be productive, they have a few options.  They can continue letting their brain to be looted, or can stop thinking, or leave to use their skills elsewhere.  Some cannot help but work harder, even as the outcomes of that effort is looted.  Others cease to think for themselves, and start to just take orders, and then blame the decision makers for the problems caused.  But over time, many of the decision makers vanish.  It is as if a mysterious destroyer keeps taking away those with the ability to think.  Leaving only those who loot, and do not take responsibility.
Although the looters want to keep looting other, they hate being looted.  They do not perceive themselves as looters, for all their actions are claimed and justified as being for the higher good.  Taking the moral high ground and gaining the support of the public, which the public suffer the consequences of the looting.  With social support, they keep looting which enriches themselves.  But what happens when there is no one left to loot?  No one left to think or produce?  Whom are they to blame?  Within the story, such questions that have uncertain answers are themselves answered with the question: Who is John Galt?
There is a lot of economics and philosophy weaved within this book.  The narrative is more background for the economics.  Seeing the impact of policies.  The impact of competition has consequences for those unwilling to compete.  For some, rather than compete, they write laws to remove the better competitors.  Claiming that it is for competition, and what is best for society.  With the irony of creating a monopoly that destroys the services the public needed.
There are many characters in this book, some of which appear to act inconsistently.  But those contradictions only appear like contradictions, as the reader is asked to check the premises in making those character judgments.
Caveats?
The book is polarizing.  Although many of the consequences of public policy in this book have historic precedents, they are exaggerated for effect.  But they also hint at the authors views on public policy.  The protagonists are major industrialists who are persecuted for their greed, but do not seem to be willing to engage politics.  With the implication that it is their greed that causes them to be productive.  There are fallacies within the economics presented.
The world in this book has different cultural values, which the protagonists seem not to understand.  It seems that the protagonists have not been engaging with the culture for that long.  They seek to understand that culture, and when that understanding comes, they gain power.
To embed the philosophy, there are very long speeches that people make, within the conversations.  These long speeches are more essays on particular topics, and reduce the flow of the narrative.  The long speeches seem to ask a lot of the listeners, and the reader, but have more succinct meanings.
Questions to Consider while Reading the Book
•What is the raison d’etre of the book?  For what purpose did the author write the book?
•What are some limitations of the book?
•Who is John Galt?
•What does Dagny Taggart do?
•Why does Dagny build the John Galt line?  How was the name chosen?
•hat did Rearden invent?  What social consequences are there for Rearden’s invention?
•Why did Rearden voluntarily give up the patent on the invention?
•What is the impact of social policies?
•How to responds to competition?
•Who are the looters?  How do they loot others?
•Why do the looters need the victims consent?
•What happened to the persecuted producers and thinkers?  Those with brains?
•Whose interest should take priority?
•What did Francisco d’Anconia do?  Why did Francisco do what Francisco do?
•What does Ragnar Dannekjöd do?  Why does Ragnar do that?
•Why does James Taggart marry Cherryl Brooks?  What does Cherryl think of James?
•How to determine need and ability?  What does it mean to pay based on need, and punish based on ability?
•What is the aristocracy of pull?
•What is the purpose of money?
•Why were so many laws created?
•What is Project X?
Book Details
Publisher:         Signet [Penguin Group]
Edition ISBN:  9780452286368
Pages to read:   1291
Publication:     2004
1st Edition:      1957
Format:            eBook
Ratings out of 5:
Readability    5
Content          5
Overall           5
at July 01, 2022