Review of In Defense of Troublemakers: The Power of Dissent in Life and Business by Charlan Jeanne Nemeth

Book can be found in:
Genre = Decision Making
Intriguing Connections = 1) Why Do People Think Differently?, 2) The Persecuted and The Persecutors, 3) How to Teach? How to Learn?, 4) To Cooperate Or To Defect?,
5) Why Is Behavior of Individuals Different When They Are in A Group?,
6) Ways To Help Oneself and Life Lessons 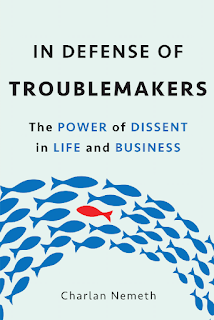 This is a book on how to raise decision making quality.  While searching for consensus hurts decision making, dissent improves decision making.  Assuming the majorities claims narrows thinking and creates poorer decisions.  People speak from the majorities perspective even if the individual is not part of the majority.  Dissent broadens thinking by opening up alternative perspectives.  The benefits of dissent are that thinking becomes more divergent, creative, and creates a search for information about the claims raised.  A reason for not raising alternative ideas is the fear of being ridiculed or rejected.  There are ways to reduce persecution such as anonymity.  Dissent should not be created for its own sake, but should be permitted and embraces when it is present.  By not speaking up, the group suffers and misses opportunities.  What matters for the dissenter is how to argue their ideas, as their ideas allow the group to see those different opportunities, some of which can be much better.

Consensus is a problem when it goes unchallenged.  When the majority has a position, they influence just because of their numbers.  Facts matter little when people think that the number of people who believe something are more likely to be correct.  People can follow the majority whether it is correct or wrong.  Majorities get public agreement without the people believing the majority position.

Dissent provides value, even when it is wrong, as it breaks blind following of the majority, and it motivates consideration of alternatives.  Dissenter minority voice influences by reason.  Persuasion by dissenter is time consuming, usually indirect, and contains an artful argumentative style.  Consistency in the dissenter is needed for persuasion, but it is not sufficient.  Dissenters change minds in private rather than publicly.  People tend to agree with dissenters in private, but resist in public.

Playing devil’s advocate does not necessarily work because its not authentic dissent, and as such does not stimulate divergent thinking.  Not criticizing others ideas is not a good tactic as it prevents consideration of the alternatives.

This book is well written to support those who think differently.  Some caveats of the book include research quality and support for dissent.

Research that is meant to support the claims have mixed quality.  Some are practical and can be applied to real life, others are to abstract to be appropriate supports of the claims made.  The research needs to be considered more carefully before applying some of the claims.

This book is very partial in disapproving majority thinking, while only supporting dissent.  Although the reasons to favor listening to dissenters and questioning majority are marvelous, it does reduce the complexity of real life which can prevent appropriate application.  There are reasons that people dissent which does not add value to decision making.  The dissenters can have their own motivations which are not for the benefit of the majority, and prevent majority decision which can help the many.  Sometimes dissenters can prevent quality decision making by the majority by coming up with erroneous alternatives.  Too much dissent can be problematic as well.

There is an attempt in making a case for how to go about with a dissent, but it needs a lot of work as there are many ways in which a dissenter who is right can project their views in a manner that makes them appear wrong.  As in, the way a dissenter presents the information, the dissenter can prevent a search for information rather than inspire the search.