Review of Why Nations Fail: The Origins of Power, Prosperity, and Poverty by Daron Acemoğlu, James A. Robinson

Book can be found in:
Genre = Economics, History
Intriguing Connections = 1) Get To Know This Worlds' People, Regions, Cities, Nations, and Empires  (History of Multiple Regions) 2) How Competitive Is Competition?,
3) The Rights of Property: Physical, Intellectual, and Other Property Rights,
4) Rent. Rent-Seeking! Lucre?, 5) The Impact of Inequality 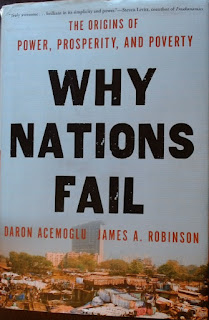 Inclusive economic institutions facilitate a willingness of individuals to partake in economic activity knowing that their output will not be arbitrarily taken.  As individuals will get rewarded for their output, they are more willing to invest and increase productivity.  Inclusive economic institutions create inclusive markets that provide individuals with the same opportunities to utilize their talents.  Facilitate obtaining skills and work suited for the individual.  Inclusive political institutions have power broadly distributed, and constrain arbitrary power.  They have elected representatives which are replaced when they misbehave.

Critical junctures are events which can disrupt societies political mix.  They can break the vicious cycle of extractive institutions, or can endanger inclusive institutions.   Inclusive economic and political institutions tend to emerge after a conflict, as there are powers wanting to maintain the status quo.  In many cases, conquerors could not coerce labor.  The tools they used were instead to incentive labor.  To get people to want to work.

Many public services can be provided by the market, but the state has a unique ability to coordinate on a large scale.  Markets are not free from becoming extractive when few firms control most of the market.  Needing a kind of political centralization to provide law and order.  To enable coordination without obtaining monopoly powers that lead to extractive institutions.

This book provides an easy read and a very good understanding of how political and economic institutions shape inequality.  Using historical analysis to bring about that understanding.  The problem is that there are many issues and inconsistencies in the book.

The historical examples quality is mixed.  Sometimes there is an in-depth background into the problems of a nation.  Other times, incidents are given and described in terms of only inclusive or extractive economic and political institutions, but there were a lot more to the events which can provide a different understanding.  There is a lot of history in this book, mainly with the start of the Industrial Revolution, but even during the low historical quality events, it enables the reader to search for more information on the nations.

•What is the raison d’etre of the book?  For what purpose did the author write the book?
•What are political institutions?
•What are economic institutions?
•What makes political and economic institutions inclusive?  What makes them extractive?
•Why do inclusive institutions create more inclusion while extractive institutions keep extracting?
•Who creates the rules?  Who enforces the rules?
•What is creative destruction?
•Why are critical junctures important?
•Why is government needed?
•What is the dual economy?
Book Details
Edition ISBN:  9780307719218
Pages to read:   462
Publication:     2012
1st Edition:      2012
Format:            Hardcover
Ratings out of 5:
Readability    5
Content          4
Overall           4
at November 29, 2021