Review of Race And Culture: A World View by Thomas Sowell

Book can be found in:
Genre = Sociology
Intriguing Connections = 1) The Persecuted and The Persecutors,
2) Why Do People Think Differently?, 3) To Cooperate Or To Defect?,
4) Why Is Behavior of Individuals Different When They Are in A Group?,
5) Why Conflict Occurs And How To Resolve Them?,
6) What Defines A Culture? How To Belong To A Community? 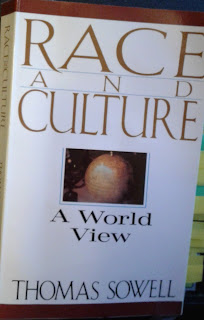 Short Description
Elaborate Description
Overview:
Different environments create different cultures as people find different responses to their environmental context.  But even with migration, there is still a transmission of ancestral values, skills, and other cultural heritage aspects even though the values come from a different time and place.  Modifying to the changing social, environmental, economic, and technological context. Cultures go beyond political boundaries.  Cultures transmit their beliefs, biases, decisions making, and internal problems.  With different ways of understanding, cultural differences can cause friction.  Politics is a mechanism that can either resolve differences among groups, or it can generate and magnify conflict.  Race as a social construct is a powerful force for uniting and dividing people.
History makes painfully purchased experiences available for everyone for the price of attention and reflection.  History can illuminate fallacies that would otherwise exacerbate the situation.  As the world has become more mixed, many racial and cultural distinctiveness have been eroded, but also many that have persisted.
Cultural features are not simply a label, they serve a social purpose which can be of dire importance.  Although appearance change, the same cultural values are applied to the choices being made.  Different groups have different value sets, attributing some purposes of economic and social life as higher or lower.  Utilizing their particular skill and ways for engaging in economic and social life.  Cultural aspects spread to other groups when they interact via trade, migration, or conquest.
Political activism is not necessary for prosperity as numerous groups have become prosperous because their culture inculcates skills and behaviors that facilities economic and social betterment.  There are groups that have been discriminated against, which were powerless and persecuted minorities, but were still able to be prominent in prosperous occupations.  Actions of others have reverberating effects, but do not completely control the fates of peoples.  Whether minority groups or conquered nations, their fates are shaped by their own policies.
Race has a biological aspect, but it is a social reality.  Many indicators have been imposed on racial groups because there are often no biological indications of the difference.  Discrimination directed at a racial or ethnic group does not require a belief of them being inferior.  When power is assumed to be part of racism, then those who verbally or physically assault others are exempt from condemnation as racism.
There were many times in history when groups that had skills and behavior which fostered economic progress, had claims that their prosperity came at the expense of others.  Nations that removed these groups incurred economic losses.  Discrimination it terrible when skilled individuals do not get into positions because of group affiliation, but that form of discrimination does fully explain below average incomes for the group.
Cultures aspects are not only shared by the conquerors to the conquered, as many conquerors borrowed from more advanced cultures they subjugated.  Availability of resources, information, or technology is not going to be helpful to a people if they are not receptive to them.  Access does not mean usage of the resources.
There are many positive and negative contributions of immigrants of which neither should be dismissed.  Even if most people in a group have no animosity towards another group, it takes only few individuals to create massive conflict between the groups.  There are many times in which different cultures are prone to conflict with others, increased the costs of having a mixed groups.  Exaggerated identity of a group can have dire consequences as copying others can be considered treason.  An inability to borrow cultural features from others prevents accessing opportunities for advancement.
Government’s resource is power which it uses to constrain the options of people and organizations.  Tending to constrain the options of the ethnic and racial minorities more that the majority.  Nations that are active in making policies that control group participation, have tended to result in more intergroup conflict than those countries less active.  Democracy can facilitate desirable goals of freedom and dignity, but it can also do the opposite.
Problems?
Although generally pretty clear and easy to read, it is sometimes hard to grasp the full implication of a claim.  Sowell at times critiques certain claims, without providing much info on the originating claim, making it difficult to understand why others think differently.  This book is more about culture than race, although race has a lot of implications for cultures.
The focus is also on the positive contributions of cultures, but there are examples and cases of negative contributions of cultures.  This leaves the reader of the question of cultural traits.  As in, what kind of traits produce the cultures that benefit the group.  Some examples are given, but a few pages detailing the traits rather than discussing them in a general manner would have helped.
Questions to Consider while Reading the Book
•What is the raison d’etre of the book?  For what purpose did the author write the book?
•What does history provide?
•Why a world view?
•How are cultures formed?
•What are cultures?
•What is race?
•What can politics do for group differences?
•Do cultures change?  How and why do cultures change?
•What happens when cultures are discriminated against?
•Does race explain intelligence?
•Why do conflicts between groups arise?
•What role does government play in discrimination?
Book Details
Edition ISBN:  9780465067978
Pages to read:   264
Publication:     1995
1st Edition:      1995
Format:           Paperback
Ratings out of 5:
Readability    4
Content          5
Overall           5
at October 06, 2021