Review of Alexander the Great: A Life From Beginning to End by Henry Freeman

Book can be found in:
Genre = History, Empires
Intriguing Connections = 1) Biographies: Auto, Memoir, and Other Types,
2) Get To Know This Worlds' People, Regions, Cities, Nations, and Empires  (Macedonia) 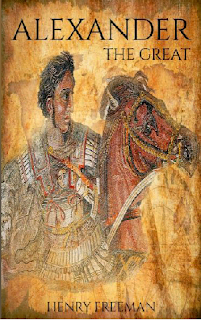 Horses were prized in Macedonia.  As Alexander, son of King Philip II, was able to master and tame a wild horse that others could not, it became a sign of future greatness.  Alexander was taught physical skills early on, along with intellectual ability.  The tutor for the mind was an Athenian exile, Aristotle.  Although with proven skill and gaining much favor from Philip, when Philip wanted a new wife with better lineage, Philip disowned Alexander.  But this was not Philip’s sole mistake in relationships, of which many mistakes conspired to assassinate him.  Leaving Alexander in charge.  Rather than dealing with internal matters, Alexander took the army and conquered a large stretch of the world in a short time.  Many areas chose to accept his rule rather than fight.

Geopolitics was important in Macedonia as local rulers had a lot of power and often tried to retain it or gain more.  Alexander needed to either suppress the rebellions and manage them.  During the conquests, Alexander earned the support of allies, and utilized impressive strategies during the battles.

The focus is on the book is on how Alexander got his power.  There is very little background information on Macedonia and the surrounding regions.  Very little cultural references, and political contexts.  A short biography that can help get a reader started in learning about Macedonia and Alexander the Great, but does not get very far in either.