Review of The Mongols: A History by Jeremiah Curtin

Book can be found in:
Genre = History, Empires
Intriguing Connections = Get To Know This Worlds' People, Regions, Cities, Nations, and Empires (Mongolia) 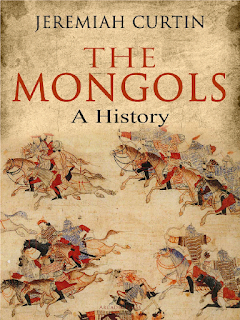 “Wherever Jinghis Khan became sovereign there was safety for travelers immediately, even in places where robbery had been the rule for many ages.” – Jeremiah Curtin, Chapter VI – Destruction Of The Kwaresmian Empire, Page 104

“The Mongols prepared for immediate action.  Trees were cut down and shaped into beans of right size, borne by men to the neighboring summits and made into catapults.” – Jeremiah Curtin, Chapter XII – Hulago Destroys The Assassin Commonwealth, Page 232

“The descendants of Ogotai, and the son and successor of Jagatai refused to appear there, declaring that the election of Mangu was illegal, and that the throne belonged by right to a descendant of Ogotai” – Jeremiah Curtin, Chapter VI –, Page 300

Elaborate Description
Overview:
This book is a detailed account of the political affairs of the Mongol Empire and its immense impact on geopolitics and the shape of global power.  Primarily covering the Mongol Empire wars with the empires of Persia, Islam, China, and its internal struggles and feuds.  The reason and results of the slaughters that took place.  The strategies that were used.  The betrayals and acts of revenge.  The tools used for war.  Regions conquered by the Mongols had their trade stabilized as the Mongols provided protection and law.  The empire had a semi-democratic republic, but not always recognized by blood kin of former Khans whom were their leaders.  Originally nomadic tribes, whose identity is bound to tribal politics, but united they became a powerful force whose opponents underestimated them at their own peril.
Problems?
Terribly written without many learning outcomes.  Although containing many details it is hard to put everything together.  Neither Mongol society or the functioning of empire is part of this book.  The focus is on the military and political aspects, but they were not written well either.
Questions to Consider while Reading the Book
•What is the raison d’etre of the book?  For what purpose did the author write the book?
•Who were the leaders of the Mongol Empire?
•Why did the Mongol Empire have war with Persia? Islam? China? Other nations?
•Why were there internal struggles?
•How did the Mongols impact geopolitics?
•What impact did the Mongols have on trade?
•What kind of tools of war did the Mongols use?
Book Details
Edition ISBN:  9788835317715
Pages to read:   378
Publication:     2019
1st Edition:      1907
Format:           eBook
Ratings out of 5:
Readability    1
Content          1
Overall           1
at September 23, 2021