Review of Trust Me, I'm Lying: Confessions of a Media Manipulator by Ryan Holiday

Book can be found in:
Genre = Decision Making
Intriguing Connections = 1) War for Your Attention, 2) How Products Shape and Change the World 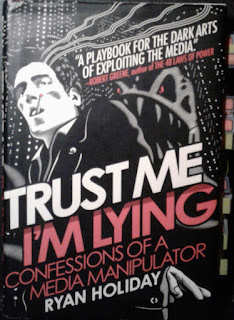 There are ways to manipulate the media, which in turn manipulates readers.  This is a guide from a media manipulator on how to avoid being manipulated, or can be used to become a manipulator.  The focus is on blogs, short for all online publishing which includes social media and major newspapers.  They are all subject to the same incentives, and fight for attention.  Bloggers are paid per pageviews which causes them to write as many blogs as possible that catch readers attention.  If there are no stories to write about, they will invent a story.  Delegating the investigation of the truth of a story to the readers.  A vital part of news which readers are not paid for.  Manipulating what bloggers write about is easy, leading to a situation where the reader is no longer informed by the news.

Conversations, ideas, and actions are sparked by what appears in blogs, making blogs important sources of spreading news.  As blogs govern public opinion, understanding what governs blogs becomes vital for digital infrastructure.  Traffic is power in the blog world.  The more traffic, the more pageviews, the more profits being made.  Pageviews depend on content, leading the blogs to post as many posts as possible.  Reality is not always interesting or newsworthy, leading to blogs to circumvent reality and invent news.  The headlines and content become more sensational because emotionally triggering news get more pageviews.  All this is good for the blog as the bloggers profit, but at the expense of the public whose attention is misused.

News operates under a link economy where a story in a blog gets shared by others.  Blogs influencing blogs.  Blogs which have low traffic compete to get stories, which then newspapers try to confirm, which then pundits spread to even larger audiences.  Articles in a blog become sources for other blogs.  Small blogs legitimize stories for larger blogs.  The income structure of blogs emphasis speed over other factors such as quality, information content, and accuracy.  Established media operate under a different incentive, protecting their reputation.  Those who already have a brand name invest in verifying the sources because they can wait.

The media system is defined and at mercy by what spreads.  Many people and companies have become casualties of the misinformation that has spread about them.  Along everyone else who has read the misinformation, as they are victims of crimes against truth.  Speculation and sensationalism are the tools used to attack people.  Unlike the scientific community where errors are corrected by the community in which prior research becomes the framework for future research, media community does not actually correct prior errors.  Errors are amplified.  Updating a correction to a blog later on provides the appearance of solving the problem, without actually solving the problem.  Besides lag between the post and when the error corrections appear, they are usually being listed at the end of the article.  Error correction can be used to amplify the error more by the way it is presented, and most people do not read the corrections.  If a correction should be posted, usually after the damage has been done, fewer people see the corrections, and those that do tend to become surer of the information read before the correction.

News before had their own benefits and disadvantages, with the internet adding their own problems.  The blog regime is defended by the publishers, those who propagate the problem.  They follow what drives attention so claim to want people to like better stuff, as if the publishers did not participate in creating the situation.  They claim that delegating the investigation to readers as a feature of the internet, as if it is not the publishers’ job to factcheck and verify.  As Holiday points out that they pretend to be impartial observers even though it was they who started the process.  Framing news narratives without taking ownership of them.

The problems discussed with the media were also perpetrated by the author.  The author had fun doing it, but then felt bad about it.  There appears to be a conflict of interest.  The problem with this is that the author thinks this confession is doing justice to the media, while being paid to write about it, while attacking others who found that the manipulations that they do have social consequences.  What appears to be missing from the book is what news should look like.  There is little discussion on investigatory journalism making it appear that there is almost no trusted news.  Holiday does point out that investigations, verification, and accuracy are and should be the responsibility of the bloggers, but it would have been beneficial to provide an understanding of a system of reporting that would be more informative than the one discussed.

Questions to Consider while Reading the Book
•What is the raison d’etre of the book?  For what purpose did the author write the book?
•How does the media get manipulated?
•How does the media manipulate the readers?
•Do news matter?
•Are news free?
•How do blogs earn their income?
•Why do blogs contain misinformation?
•What is the impact of corrections to misinformation on blogs?
•How does the link economy operate?
•What are appropriate and inappropriate sources to news?  What kind of sources do blogs use?
•What is iterative reporting?  What impact does it have on the news?
•Are blog readers informed by what they read?
•Who benefits from the media system?  Who pays the price?
•What do publishers think about the problems within the news industry?
Book Details
Edition ISBN:  9781591845539
Pages to read:   236
Publication:     2012
1st Edition:      2012
Format:           Hardcover
Ratings out of 5:
Readability    5
Content          5
Overall           5
at May 09, 2021