Review of The Silk Roads: A New History of the World by Peter Frankopan

Book can be found in:
Genre = History
Intriguing Connections = Get To Know This Worlds' People, Regions, Cities, Nations, and Empires  (History of Multiple Regions) 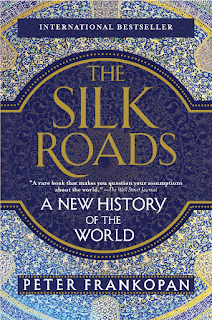 History is usually seen from the perspective of winners of the recent history which are part of the West.  But there are alterative perspectives.  This book looks at history from the perspective of the East.  Rather than being on the periphery to the rise of Western prominence, the East was instrumental to its rise.  History has many kingdoms and empires of the West which did not look West for wealth as there was not much there.  They looked East, for that was where the wealth and many novel ideas were.  Ideas and practices which were shared via migration and commerce.  It was on these trade roads that connections were made.  It is these connections which add to an understanding of historical events.  Meanwhile inspiring readers to further study the nations which impact the shape of the global political structure.

Part of the reason why non-West histories have been relegated was due them being seen as oriental.  Negative view and presupposing inferiority, which meant that there was no value in undertaking the research.  This is in contrast to the shape of events.  Alexander of Macedon did not look to Europe for rewards, but to the East, to Persia.  In Persia came the opportunities, ideas, and threats.  Rome also looked to Persia for wealth, and danger.  During a time when knowledge had no value to the Cristian world, Muslims took delight in innovation.  Many texts survived because they were translated to Arabic in Baghdad which increased dissemination of knowledge.  Knowledge that Europe would later take and influence its rise.  Influence worked in various directions such as Buddhists needing to create new practices in response to religions from the West.

Trade routes required building and maintaining an administrative system which incorporated different peoples.  Recording payments and validating quality and quantities.  A willingness to adapt to new ideas and practices.  Times of tension saw economic infrastructure decline, while stability ensued tolerance and a rise to economic prosperity.  Learning and trading from different people increased specialization.  Nomadic tribes and sedentary cultures increased their fortunes by being near each other, by trading with each other for resources that each needed.  Unfortunately, ideas and products were not the only things to passed from peoples to peoples, diseases passed on the trade roads as well.  Diseases devastated large portions of the populations.

This book gives prominence to the East but this stems from an idea that the West only learns about the West.  Although education and history do need to do more about creating a holistic understanding of history, there have been plenty of research on non-West nations.  The author makes it feel that he is part of a small group seeking to understand East.  Although that is not the case, what this book does do is peak interest in Eastern cultures.  But that brings up another problem, as there was not much per culture.  Important connections are being made in this book by incorporating the perspective of the East, but to understand any given culture and event will require more research.  There seems to be a poor transition between the cultures, with many events being in isolation, as in without an appropriate background history.  Transitioning between cultures before an understanding can be reached.  As historians need to pick which parts of history to narrate, this is sometimes done well in this book, sometimes not at all.