Review of Atomic Habits: An Easy and Proven Way to Build Good Habits and Break Bad Ones by James Clear

This review was written by Eugene Kernes
Book can be found in:
Genre = Decision Making
Intriguing Connections = 1) The Forge Called Habits, 2) Ways To Help Oneself and Life Lessons 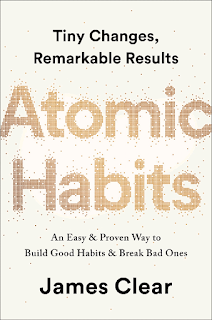 Doing a little consistently adds up to being a lot over time.  Habits are the little things that we do without giving it much thought, mostly automatically.  A heuristic learned from experience.  Depending on what habits are forged, they can be liberating or debilitating.  Habits can be helpful, by facilitating growth in what is valued.  Habits can be terrible, by making it hard to do the desired activities.  Formed habits are lasting and automatic.  This is a practical guide in how to create good habits, and overcome bad ones.  Four principles of habit formation are to 1) make it obvious, 2) make it attractive, 3) make it easy, and 4) make it satisfying.  Removing habits requires an inversion of the principles.  By fostering or removing the very small actions that are habits, the actions will aggregate into a huge difference.

A tiny change is usually unnoticeable.  This change is frustrating because improvements are not noticeable, not significant.  But it is very meaningful over time.  These small actions, these habits, are what Clear considers to be the compound interest of self-improvement.  Alternatively, repeating tiny poor decisions leads to toxic behavior over time.  Individuals can choose which habits to cultivate, which result in vastly different outcomes.  Progress is not linear and outcomes are delayed.  Success usually seems quick, like a dramatic event, but it was all the small events that proceeded that made it happen.

Habit formation takes on four steps which are cue, craving, response, and reward.  The cue is what triggers the behavior in anticipation of reward.  Cravings are the motivations to behavior, the desire to act to obtain a change.  For cues to be turned into cravings, they need to be interpreted by thoughts, feelings, and emotions.  The response is the thought or action that is performed to a given craving.  Reward is the sought after desired result which either teaches or satisfies.

Creating habits requires the use of the four steps to form habits, while removing bad habits requires the inverse of the process that creates habits.  To set a cue, it needs to be obvious.  To create a craving, it has to be attractive.  To get a response, it was to be easy to do.  To want the reward, it has to be satisfying.  To remove a bad habit would require making the cue invisible, making the craving unattractive, making the response difficult, and making the reward unsatisfying.  Making a plan, bundling habits, and designing an environment that promotes the desired results are part of the system that enables habit creation (or its inverse).   Culture is a major influence on individual behaviors, which means joining a culture consistent of the desired behavior makes it easy to change to it.

Failing to change habits is not a problem with the individual, it is a problem with the system being used.  To change a habit is difficult when it is the wrong thing being changed or changing it the wrong away.  Changing a habit means becoming a different person, a different way of viewing oneself.  Not changing the identity causes many to go back to their previous habits because that is what they consider as their identity.  This is because there is pressure to maintain the self-image and avoid contradictions.  Changing habits requires unlearning, and editing beliefs.

The science background into motivation looks at dopamine, which is a brain chemical that facilitates desire to act.  It is not the reward itself that produces actions, but the anticipation of reward. Actions that get rewarded are going to be repeated.  Alternatively, actions that get punished are going to be avoided.  Bad habits are a vicious cycle in which they create the feelings that they try to numb.

This book is a very practical and useful guide to change behavior, but it should come with caveats.  Not necessarily problems, but limitations.  1) Having a lot of science to back up the research allows a greater understanding of the topic, but in and of itself does not make this a scientist book.  The author creates a system where the benefits of the system are represented, but if the individual should fail, it’s the system they were using.  Science requires the hypothesis to be subject to a falsifiability test, which this book does not have because it is the system that needs to change.  2) Lack of falsifiability also leads to a survivorship bias.  Even though the author did discuss survivorship bias in the book under a different context, there is no account of people who used the systems appropriately and still failed to improve.  There are different ways to fail to change a habit, but each different way comes with its own set of problems which can shape the outcomes.  3) Part of the book discusses lying about one’s identity to foster the identity that is claimed.  Faking it until the habit forms and becomes the identity.  Besides being an example that has a host of problems that are not discussed, it also contradicts another part of the book that discusses the need to be open and honest about what behavior needs to change.  4) In combination, it reads like a system that is a panacea to all behavioral problems.  That there is no limit to what people can do should they follow the steps to create a system that facilitates their desired behavior, which is ironic given that the author does discuss limitation in another context.