This review was written by Eugene Kernes
Book can be found in:
Genre = Economics
Intriguing Connections = Globalization and International Trade: A Known Problem? 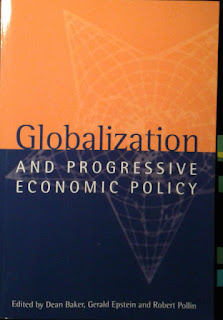 Globalization involves increased interactions between people in different countries which changes relationships between nation-states and economies.  These interactions does not mean that trade partners will become poorer, but the way in which the interactions happen can cause problems.  Markets can focus on short-term metrics, do not utilize full human capacity, increase inequality which can increase inefficiency, and shift political power to influence decisions.  The authors recognize that governments might not fulfill their designated tasks, but that states are an alternative determination to economic outcomes.  As economies become globalized, their financial systems converge on monetary policies, which is a way that nations seem to lose control over their own economic policies.

To understand this book requires a lot of background information on what the authors are discussing.  There are a lot of misperceptions that the authors have which cannot be reconciled such as claiming to want states to take charge over their economic policies, while taking away decisions from the people they are responsible for.  The authors usually blame neoliberalism for various world economic maladies but they reference policies in which neoliberalism was the heterodox view rather than mainstream.  What makes this ironic is that some authors do point out that the policies under observation come from a Keynesian era.  By trying to deflect blame and problems to another economic perspective, the authors miss the problems created by their own perspectives.