Review of Wealth, Poverty and Politics by Thomas Sowell

Book can be found in:
Genre = Economics, History
Intriguing Connections = 1) Get To Know This Worlds' People, Regions, Cities, Nations, and Empires  (History of Multiple Regions) 2) The Impact of Inequality 3) Learning Economics: Basic to Advanced 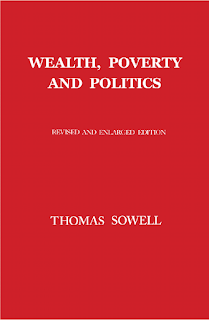 Short Description
Quotes
“It is especially painful when policies to help the poor misfire and leave the poor worse off, since they have less margin with which to absorb the consequences of other people’s errors.” – Thomas Sowell, Preface, Page 6
“Facts do not speak for themselves.  They speak for or against competing beliefs or competing theories.  If the study of facts cannot always be definitive, it can at least be clarifying.  And there are few issues more in need of clarification than issues involving wealth, poverty and politics.” – Thomas Sowell, Preface, Page 10
“There is nothing automatic about prosperity.” – Thomas Sowell, Issues, Page 11
Quotes with permission from publisher
Elaborate Description

Economic inequalities are common in the history of people.  What changed are the patterns of the inequalities.  Prosperity requires time and work.  Wealth needs to be produced rather than just come into existence.  Economic incentives change production capacities.  Rather than make counterproductive social policies to escape responsibility, people have to learn to shape their society with habits and values that enable them to become productive and produce wealth.  Success requires many prerequisites factors, while not having just a single factor can lead to failure.  Interactions between the various factors influences the outcomes, each is not deterministic.  Learning from different peoples allows access to skills and knowledge which leads to overcoming many limitations.  Isolated peoples are deprived of alternative ways to handle limitations.

Output creates the standard of living rather than the money, for it was money then government would print money to create the standard of living.  Economic disparities are caused by either how a people produce wealth, or by transfers.  Confusing production and transfer carries consequences for the future of nations.  When policy makers design policies that impact the poor, it is tragic when they do not help because the poor bear the cost of the policies, and it is the poor who have less ability to overcome the consequences created by other people’s error.  Understanding what influences on prosperity and poverty can help identity what is needed to create prosperity, and what leads to poverty.  Peoples who rose from impoverished backgrounds to prosperity are not privileged, they have made an achievement.

Geography does not determine what people can do, but it certainly influences the options available by either limiting them, or expanding them.  Location can allow people to develop their own mental capacities, and specialties.  Resources, geography, and climate are different in various regions.  Each has its own advantages and disadvantages to humans.  Each creates different opportunities for human development.  What matters is how geography interacts with non-geography factors such as culture, politics, and various other influences.  Due to the variety of different interactions, they can produce vastly different economic outcomes.  There are regions with little natural resources that are wealthy, and regions with lots of natural resources but are poor.  Geographic use changes over time as human knowledge and technologies advance.  Transportation, and other technological advances, can mitigate or remove various geographic impediments.  Even altering geographic features.

Isolation, whether physical or socially imposed, limits growth and usually regress a society.  Knowledge and technology are not isolated to a particular people.  Including diverse groups brings with it their knowledge and skills, while isolating a people reduces their ability to come up with alternative solutions to their limitations.  Discoveries and inventions can come from every society, with no society being the sole source of all discoveries and inventions.  By having contact with peoples of different societies, discoveries and inventions transfer via people.  Knowing how other people handle limitations informs others how to change, rather than be depended on the same actions.  An isolated culture contains a disadvantage in which it cannot access those different knowledge and technology to impact their limitations.

Culture influences how a peoples create wealth.  Cultures that develop human capital are able to generate wealth where ever they go, but cultures that rely on others to generate wealth become poor when they cannot access the others.  Conquers plundering wealth are wealthy as long as there is military glory to be held, but the military culture is an impediment when military glory is not possible.  There were people who were forced to exile while leaving their wealth behind, but rose to prosperity.  Genetic determinism cannot explain the extreme reversals of wealth and poverty of nations.  Cultural values that prioritize acquisition of skills have generally become prosperous.  People needed to develop human capital to deal with circumstances.  In other circumstances, people did not need to develop human capital.

Cultural aspects have been borrowed from other cultures for their own benefit.  While some cultures are receptive to foreign ideas and products, other cultures are antagonistic to alternatives.  Exiling certain groups from a nation tended to impoverish the nation while increasing the wealth of the nations that welcomed the exiles.   Those who did not compete before did not develop human skills needed when different cultures became prominent.  Rather than developing the skills needed to generate wealth, many groups have claimed that they were being exploited because they could not compete with harder working peoples.

Coordination among people who trust in each other reduces the risk of engagement which facilitates faster economic decision making.  An economy that has a lot of corruption reduces the ability to form bonds between people which make it hard peruse ventures such as business and investment.  Coordination requires communication, and communication depends on language, whose value increases as more people speak it.

Government is like any institution that has limitation and its own interests.  In a democracy, to get into positions of power requires them to compete using visions for what to do with that power.  The cost of this competition is that reality gets punished if it deviates from popular beliefs, as such, politicians tend to tell voters what the voters want to hear.  It is through manipulating reality that politicians get hired.  Politicians try to protect the egos of the majority than utilize the skills and knowledge available in the economy.

The writing is eloquent and provides a lot of depth to the range of topics.  The problem is that Sowell sometimes dismisses certain views too quickly.  Although providing an understanding of alternatives views, by dismissing some popular ones, it becomes difficult to understand the reasons.  Although Sowell makes the point that each factor influences rather than determines outcomes, there are examples used to describe different groups as if the particular aspect determines the differences, or at least are more prominent than others.

•What is the raison d’etre of the book?  For what purpose did the author write the book?
•What is wealth?  How is wealth obtained?
•Can a particular factor determine the fate of human development?
•Why have there been inequalities between peoples?
•What factors influence economic outcomes?  Does each factor matter?  What happens when they interact?
•What influence does geography have on the people?
•What does isolation do to a people?
•What influence does culture have on the people?
•How do different culture interact within a nation?
•Why are exile a people?  What happens to the nation that exiled them and to the nations that welcomed them?
•What are social factors?
•How does politics impact people?
•What are the roles of government?
•Who do people vote for?
Book Details
Edition ISBN:  9780465096770
Pages to read:   389
Publication:     2016
1st Edition:      2015
Format:            eBook
Ratings out of 5:
Readability    5
Content          5
Overall           5
at May 31, 2021