Review of Madness and Civilization: A History of Insanity in the Age of Reason by Michel Foucault

Book can be found in:
Genre = Psychology
Book Club Event = Book List (05/20/2023)
Intriguing Connections = 1) When Intelligence Goes Wrong, 2) Why Do People Think Differently?,
3) The Persecuted and The Persecutors 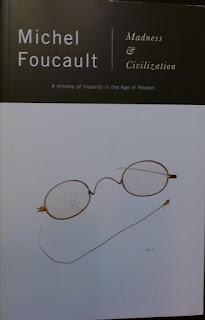 “Leprosy disappeared, the lepe vanished, or almost, from memory; these structures remind.  Often, in these same places, the formulas of exclusion would be repeated, strangely similar two or three centuries later.  Poor vagabonds, criminals, and “deranged minds” would take the part played by the leper, and we shall see what salvation was expected from this exclusion, for them and for those who excluded them as well.” – Michel Foucault, Chapter 1: “Stultifera Navis”, Page 7

“But if knowledge is so important in madness, it is not because the latter can control the secrets of knowledge; on the contrary, madness is the punishment of a disorderly and useless science.  If madness is the truth of knowledge, it is because knowledge is absurd, and instead of addressing itself to the great book of experience, loses its way in the dust of books and in idle debate; learning becomes madness through the very excess of false learning.” – Michel Foucault, Chapter 1: “Stultifera Navis”, Page 25

“The chimeras are transmitted from author to reader, but what was fantasy on one side becomes hallucination on the other; the writer’s stratagem is quite naively accepted as an image of reality.  In appearance, this is nothing but the simple-minded critique of novels of fantasy, but just under the surface lies an enormous anxiety concerning the relationships, in a work of art, because the real and the imaginary, and perhaps also concerning the confused communication between fantastic invention and the fascinations of delirium.” – Michel Foucault, Chapter 1: “Stultifera Navis”, Page 29

Society has ways to provide a contrast between the wanted values, and the unwanted.  Needing the presence of an insistent and fearful figure, that is kept at a sacred distance.  Salvation comes through exile, through abandonment.  The position of the excluded used to be occupied by those with leprosy.  Although leprosy disappeared, the social infrastructure of exclusion did not.  The position of the excluded was been taken up by the poor vagabonds, criminals, and deranged minds.  During a time when reason was becoming the ideal virtue, unreason became the threat.  Madness assumed the form of non-reason.  The opposite of reason.  Each existing in relation to the other.  As they provide each other with a contrast.

Madness provides an inaccessible mystery, making others curious about it.  Madness appears to be a very arbitrary phenomena, that debases the human to a primal animal.  Haunted by one’s own nature.  Madness depends on perspective, for someone’s fantasy, is another’s hallucination.  What is real to some, is imaginary to others.  Madness values knowledge, but cannot control the secrets of knowledge.  Cannot reconcile the absurdities of knowledge, and find a way to proceed.  Madness developed by an excess of false learning, a punishment for disorder.  Desperate passion can lead to madness.  Excess disappointment loses the object of affection, means having nothing to prevent a fall into a void of delirium.  Madness can be tamed, and appear to be in control of one’s faculties.  Disguised in the ambiguity of reality and illusion.

Some cities provided a budget for the care of those deemed to have a madness, but were normally just thrown in prison.  Some cities took the mad in as they were interested in cures that would provide miracles.

There were various public rituals involved in exclusion of the mad.  Delivering them to sailors, made sure of their removal, but also provided a potential of a watery grave.  Water as a purification symbol.  An uncertain fate, as every departure potentially the last.

Work was assumed to be an ethical exercise and moral guarantee.  Prisoners who could work were released, not because they could be useful, but because they submitted to the ethical pact of human existence.

Confinement became the normal treatment for economic measure and social precaution.  Madness has become a mental illness, and separated from society.  Communication with those who have a madness, has been delegated to those dealing with diseases.

The book is difficult to read.  The transitions between claims are poor, by moving too quickly between different ideas, sources, and topics.  Many references are esoteric.

Questions to Consider while Reading the Book
•What is the raison d’etre of the book?  For what purpose did the author write the book?  Why do people read this book?
•What are some limitations of the book?
•To whom would you suggest this book?
•Why do societies exclude certain peoples?
•Why was madness excluded?
•What is madness?
•How can someone develop a madness?
•How to differentiate between what is real and what is illusion?
•Why does madness fascinate?
•What does reason have to do with madness?
•What are the passions of madness?
•How does is knowledge used by madness?
•How did societies treat those with a madness?
•What determined whether the mad would be locked up or set free from confinement?
•How is madness treated?
Book Details
Publisher:         Vintage Books [Random House of Canada]
Edition ISBN:  9780679721109
Pages to read:   295
Publication:     1973
1st Edition:      1961
Format:            Paperback
Ratings out of 5:
Readability    2
Content          2
Overall           2