Review of Think Again: The Power of Knowing What You Don't Know by Adam Grant

Book can be found in:
Genre = Philosophy, Epistemology
Book Club Event = Book List (10/01/2022)
Intriguing Connections = 1) How to Teach? How to Learn?,
2) Why Conflict Occurs And How To Resolve Them?, 3) Why Do People Think Differently?,
4) Ways To Help Oneself and Life Lessons, 5) When Intelligence Goes Wrong,
6) To Cooperate Or To Defect?, 7) How To Have A Conversation? 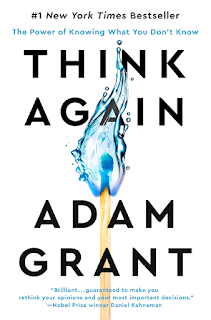 “Part of the problem is cognitive laziness.  Some psychologist point out that we’re mental misers: we often prefer the ease of hanging on to old views over the difficulty of grappling with new ones.  Yet there are also deeper forces behind our resistance to rethinking.  Questioning ourselves makes the world more unpredictable.” – Adam Grant, Prologue, Page 11

“When a core belief is questioned, though, we tend to shut down rather than open up.  It’s as if there’s a miniature dictator living inside our heads, controlling the flow of facts to our minds.” – Adam Grant, Chapter 3” The Joy of Being Wrong, Page 54

“If two people always have the same opinion, at least one of them isn’t thinking critically – or speaking candidly.  Intellectual friction isn’t a relationship bug.  It’s a feature of learning.” – Adam Grant, Chapter 4: The Good Fight Club, Page 78