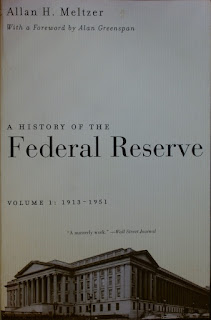 “Fears that a privately owned bank would place the bank’s interest above the public interest had to be reconciled with concerns about empowering the government to control money.” – Allan Meltzer, Chapter One: Introduction, Page 2

“They wanted the central bank to damp fluctuations in market interest rates, particularly those created by the seasonal demand for currency and the financing of crop harvest, and to encourage the development of a broad national market in commercial paper and bills of exchange patterned on the London Market.” – Allan Meltzer, Chapter Three: In the Beginning, 1914 to 1922, Page 65-66

“The belief spread that the Federal Reserve had learned how to maintain prosperity, damp recessions, and prevent inflation.  The return of many countries to the gold standard by 1927 reinforced the view that the world economy was on a stable foundation and that inflation and deflation were unlikely to occur.” – Allan Meltzer, Chapter Four: New Procedures, New Problems, 1923 to 1929, Page 253