Review of A Tree Grows in Brooklyn by Betty Smith 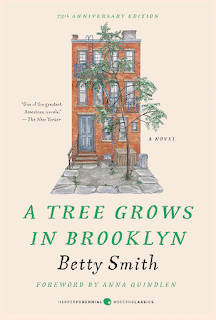 “The tree knew.  It came there first.  Afterwards, poor foreigners seeped in and the quit old brownstone houses were hacked up into flats, feather beds were pushed out on the window sills to air and the Tree of Heaven flourished.  That was the kind of tree it was.  It liked poor people.” – Betty Smith, Chapter 1, Page 1

“A smile would have meant a lot to Francie and a friendly comment would have made her so happy.  She loved the library and was anxious to worship the lady in charge.  But the librarian had other things on her mind.  She hated children anyhow.” – Betty Smith, Chapter 2, Page 32

“The neighborhood stores are an important part of a city child’s life.  They are his contact with the supplies that keep life going; they hold the beauty that his soul longs for; they hold the unattainable that he can only dream and wish for” – Betty Smith, Chapter 16, Page 136

Trees grow in neglected areas, tenement districts.  The trees come first, then poor foreigners follow.  A tree that likes poor people.  The poor and those who have money have different views of each other.  Different views about why people are in poverty.  This book highlights the misunderstandings of assumptions about those within different social classes.  A secret to success within this book, to get out of poverty, is the ability to read.  Getting as much education as possible.

The poor in this book are described as those who struggle to survive, and get ahead.  Working hard to kept what they have.  A dislike of charity, and the humiliation that it brings with it.  A want to not feel the need to save as much as possible of everything.

There is a clash between hope and effort.  Not just between the characters, but the reason for immigrating.  The purpose of coming to America was that it was supposedly a place of hope.  Where circumstances could be improved.  With those improvements come over the generations.  Slowey but surely trying to help the next generation achieve more than they and their predecessors had.

Education, specifically reading, being one of the skills that are impressed as a need for social advancement.  The library having a lot of importance, given that it provides access to books.  With help from Katie’s mother, Katie used the information to instill a want to read in Katie’s daughter Francie.  Growing up, Francie was exposed to a lot of books, and loved to read books.

School is another important source of knowledge.  But not all schools want to educate the children.  With very mean children.  Francie still appreciated school in spite of the cruelties.  The cruelties made Francie really appreciate the next school, and a willing to walk a lot to the better school.

Whenever Francie saw ideas that could be improved upon, the future that Francie saw for Francie changed.  Wanting to be an integral part of the reason for the improvement.  An incessant need to improve ideas.

Francie became liable to lie.  Although given somewhat poor ideas on the delineation between lying and a story, advice was given for Francie to write the truth.  Francie found an outlet in writing, in order to keep a dividing line between truth and fiction.  A discrepancy between what is true and what is beautiful, between the real misery and the hope.

The book can be a bit difficult to read, with poor flow.  The historical context and situations have changed.  Many of the interactions and events lack emotional appeal, but their representation makes them more realistic.

Questions to Consider while Reading the Book
•What is the raison d’etre of the book?  For what purpose did the author write the book?
•What are some limitations of the book?
•Why do trees grow in Brooklyn?
•What is Francie’s characteristics?
•Who are the people around Francie?  How does do they help/hinder Francie?  How does Francie view them?
•What are Katie Nolan’s characteristics?
•What social dynamics are exhibited?
•Is the book representative of the place and era?
•What are some social class assumptions?
•What is the purpose of an education?
•What role does the library have in society?
•How was religion used?
•How did the political parties behave themselves?
•Why did foreigners come to America?
•Why is reading the secret to success?
•What are the social conditions of women during the era?
•How were Francie’s school days?
•What is the difference between a lie and a story?
Book Details
Edition ISBN:  9780061803024
Pages to read:   453
Publication:     2009
1st Edition:      1943
Format:            eBook
Ratings out of 5:
Readability    3
Content          3
Overall           3
at April 11, 2022