Review of The Perdiccas Years, 323–320 BC: Alexander's Successors at War by Tristan Hughes

Book can be found in:
Genre = History, Empires
Intriguing Connections = 1) Get To Know This Worlds' People, Regions, Cities, Nations, and Empires  (Macedonia), 2) War, 3) Why Conflict Occurs And How To Resolve Them? 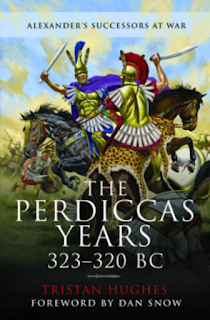 Battles for power started immediately after Alexander the Great’s death.  Internal strife started small and was managed.  But incidents kept escalating the problems until further battles, and then war for succession.  A Macedonian civil war.  Even during the battles, the soldiers had remorse in attacking other Macedonian troops and leaders.  For they had been fighting with them during previous battles.  This is a story of what happened after Alexander the Great died in Babylon.

Among those most proven and highest-ranking individuals of Alexander the Great’s empire were seven bodyguards.  Those who had proven themselves countless times on the battlefield.  But it was not just the bodyguard who laid claim to the throne, as there was Alexander the Great’s unborn child, another illegitimate child, and close relatives.  Whoever would claim the throne, would require a regency or a shift in power.  Even alternative methods of rule were considered, such as a committee to rule the empire rather than a monarchy.

The monarchy needed legitimacy, making the kingship a death warrant to those without.  Legitimacy required the support of nobility, soldiers, and external allies.  Without them, conflict would arise.  Perdiccas was very skillful in becoming the regent and gaining de facto control.  Turned to solidifying power and pursuing ambition.

Unless you are interested in the history of warfare, there will be times of poor writing flow.  There is a lot of background information that had caused forthcoming events, but it can still be hard to understand many of the decisions and events.  The decisions taken appear to be very calculating, without much cultural influence.