Review of Against Intellectual Monopoly by Michele Boldrin, and David K. Levine

Book can be found in:
Genre = Economics, Law
Intriguing Connections = 1) Learning Economics: Basic to Advanced,
2) The Rights of Property: Physical, Intellectual, and Other Property Rights,
3) How Competitive Is Competition? 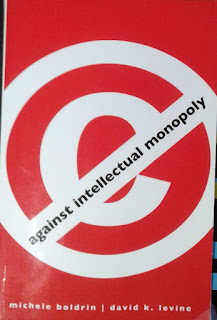 Intellectual property rights are an exclusive right, a monopoly, over an abstract idea.  A monopoly’s modus operandi is to create artificial scarcity, resulting in higher prices.  Purposely being inefficient.  To obtain a monopoly requires government support, which leads to favorable treatment such as increased wealth which is taken from the rest of society, by preventing entry and blocking innovation.  Competition within ideas promotes their spread as any improvement can be used by others, including the original innovator.  But a monopoly is against competition.  The problem is not with having property over an individual copy of an idea.  The problem is having property of other people’s copies of the idea.

Copying was made easy by the printing press.  Copyright was originally an instrument of government censorship, rather than protecting innovators or spreading ideas.  Royal and religious authority were to decide what could and could not be printed.  Then patents came to be used, but as a tax instrument.  Copyright and patents were obtained by bribing royal power for use of monopoly power.  Before Parliament took over the monopoly system from the monarchy, the monarchy was able to sell a monopoly for any product.  Under Parliament, monopolies became temporary and restricted to actual innovators.

Although innovators deserve compensation as few people would innovate for nothing, it does not mean granting a monopoly is an appropriate response.  New ideas are usually a by-product of the innovator’s routine activity.  Patents often come way after the innovation.  Derived from legal resources and used to maintain the obtained fortune, and used to hurt competitors which also hurts economic progress.  A legal monopoly engages in rent-seeking behavior as they suppress competition while obtaining special privileges.  Having a monopoly is beneficial to the monopolist as that means there is no need to compete with imitators or customers.

Those who support or disagree with intellectual property, share the understanding that it requires an appropriate mixture of using existing ideas while providing an incentive for creating new ideas.  Those who support intellectual property rights want more profit for innovators, while opponents consider the profits already too high.  Some protection can be beneficial, but further protection does not provide benefits.   Transactions do occur in the absence of legal rights, but markets work best with clearly defined property rights.  What is need is protection for the innovator and those who legitimately obtained a copy.  Protecting the innovator encourages innovation.  Protecting the customers of bought copies encourages diffusion and improvements.

Competition can divide profits so much that there will not be an incentive to innovate.  A market failure in which intervention would be an alternative but monopoly power is not an appropriate response.  When the innovation is good and copies are easy to make, there will be many imitators of the innovator.  Many firms enter too quickly which causes prices fall and many firms to make losses, thereby leaving the market.  What competition does is remove inefficient firms and thereby produce a social benefit.  For imitators to pick only winners to imitate would not be very profitable as winners are a post hoc account of those who are already leaders in the market and had already sold a lot.

Being first to innovate allows the original innovator to capture a lot of profit and market power before any imitator can imitate the product.  It takes time and resources to reverse engineer a product.  The original innovator can also sell enough products early enough at a low enough price to make the product not profitable to imitate.  Not only do ideas take time to spread, but they are difficult to communicate.  A benefit of not being a monopoly, is that customers are not dependent on the survival of the monopoly, thereby more willing to use the product.

When competitors are allowed to imitate, it creates collaborative benefits to competition.  Even the original innovator benefits from other competitors advances.  Sharing information increases the chances that the competitors will make further innovations, that the original innovator can utilize and benefit from.  The benefits of competitors leapfrogging innovations, and thereby reducing major costs, are far above what could be earned as a monopoly.  Having a free market for a product does not mean not paying for it.  Free market means anyone can use the product, but still needs to pay a price for the distribution.

There are no so many patents out there that it has become impossible not to infringe on a patent.  That means that firms need to prepare for legal costs.   This makes innovations risky.   Many patents are obtained not to be used, but to prevent potential legal disputes.  Spending resources to obtain and hold defensive patents.  Rather than patents facilitating innovation, they facilitate a market for patents and their needed legal services to trade and enforce them.

Under a monopoly system, small firms work hard to innovate, but large monopolies work hard to retain their position.  The difference is that the large monopoly firms have resources and connections that the small innovators do not.  It is hard for small firms to enter any market that has incumbents with many patents as they restrict the options of entry.  With the patent system, rather than small firms becoming larger, their aim becomes being purchased by an incumbent.

It will be difficult to change the intellectual property right system as there are many institutions that are in symbiosis with it.  There will be collateral damage from just removing the system.   Many companies have started to aggregate their patents into patent pools which allows all of them to benefit from the same patents without cost.

Many iconic people who appear to have been exceptional innovators actually did not do much in innovation.  Only after James Watt’s patent expired was there increased innovation in the production and efficiency of engines.  Watt’s own engine design had a flaw that could have been rectified, but the patent on the fix was patented by another thereby preventing progress.  Watt and his partner Boulton began their manufacturing operations after the patent expired, having made royalties from the patent before that.  Staying ahead not because of improvements in product, but by exploiting the legal system with a partner who was close to Parliament.

The original exclusive right to authors and inventors comes from the U.S. Constitution.  Meant to promote progress in art and science.  During the 19th century U.S., American authors were under intellectual protection but foreign authors were not.  English books were still read, and the English authors were still paid, sometimes even more than with the copyright.  American publishers paid for English manuscripts before other were able to.  Saturating the market with their copy, which prevented many imitators while keeping the price down.

The reason the copyright term lengths are very long, longer than the author or artist, is because they are not the beneficiaries of the copyrighted product.  Copyright terms were lengthened to protect successful titles that were due to expire.  Many titles were copyrighted to prevent their further publication, as their publication would have crowded out more successful works.  Older books are unpublished and are more valuable unpublished than published.  These titles are not likely to be found in the future.

An eloquent read which facilitates an understanding of not only how property right work, but how competition works.  The claims for intellectual property rights are not dismissed, but rather explained in detail.

The problem comes about to the solution of the profitability of innovations without patents and copyrights.  The authors claim that there are alternative products that can be complimentary to the main product which can raise the profitability.  That means that the market will have to figure out what those alternative products are.  Some products may not have suitable for complimentary products to make them profitable, while the profitable complimentary can change the value of the core products.  As in, the innovations with and without property rights can create very different products.

•What is the raison d’etre of the book?  For what purpose did the author write the book?
•Why are intellectual property rights considered monopolies?
•How does a monopoly function?
•Why are monopolies inefficient?
•Why do monopolies need government support?
•How does a monopoly retain its monopoly?
•How are innovations formed?
•What does competition do?
•How do competitors benefit from competition?
•Are property rights needed?
•Why are intellectual property rights different than physical property rights?
•Why did copyrights come about?
•How were monopolies used by the monarchy?  How did it change under Parliament?
•How are innovators compensated by their innovation?
•When do innovators obtain patents?
•Why is there a difference between protecting the innovator and the customers?
•How can property rights facilitate transaction?
•Who do imitators imitate?
•How can innovators earn a profit without intellectual monopoly?
•What are the benefits to sharing ideas more readily?
•Is it possible not to infringe on patents?
•How can patents be abused?
Book Details
Edition ISBN:  9780521127264
Pages to read:   267
Publication:     2010
1st Edition:      2008
Format:            Paperback
Ratings out of 5:
Readability    5
Content          5
Overall           5
at October 18, 2021