Review of The Approaching Storm: Conflict in Asia. 1945-1965 by Edward J. Marolda

Book can be found in:
Genre = History, War
Intriguing Connections = 1) Get To Know This Worlds' People, Regions, Cities, Nations, and Empires (Vietnam), 2) The Motive, Method, Ideology, and Consequences of Intervention,
3) War 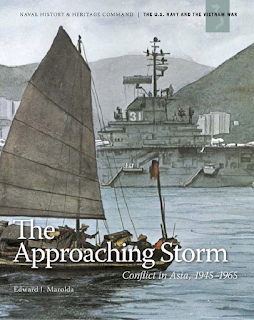 The Vietnam War was fought for 25 years, to preserve the independence of various Indochinese governments.  But the United States lost the war, while Communist movements and military forces took over the governments.  The war started shortly after WWII, as many European countries wanted to reestablish colonial control over various Asian countries.  This led to many anticolonial resistance movements, which were often led by Communists.  Vietnam was a strategic military location from which to protect the rest of Indochina.  With the U.S. supplying and training locals with a lot gear and vehicles.  The Vietnam War was ultimately a failure because they misunderstood the geopolitics of Vietnam and the rest of Indochina.

The book is not well written and from the perspective of the U.S.  Trying to claim some honor and dignity from their efforts.  No recognition of mistaken political and ideological understanding.  Making claims from what the U.S. perceives as were the problems with Vietnam, rather than looking or understanding the Vietnam’s perspective.  A continuous mistake is made attributing U.S. values unto a different cultural people.  This prevents understanding of the problems that occurred within geopolitics, and prevents learning from the failures.  Lessons that were not learned, which this book does not elucidate, proceed to further create policies that lead to failure.

•What is the raison d’etre of the book?  For what purpose did the author write the book?
•Why seek to protect Indochina?
•What were the Indochinese people resisting?
•What was the ideological mindset of the invaders and the local population?
•What was U.S.’s failure with the Vietnam War?