Review of Antitrust: Taking on Monopoly Power from the Gilded Age to the Digital Age by Amy Klobuchar

Book can be found in:
Genre = Economics, Law
Intriguing Connections = 1) Get To Know This Worlds' People, Regions, Cities, Nations, and Empires (United States of America), 2) Learning Economics: Basic to Advanced
3) How Competitive Is Competition? 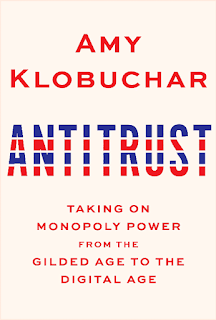 Trusts and monopolies are anti-competition.  They not only remove choice from consumers and increase the price of their products, they limit innovation and prevent alternative solutions by absorbing or harming competitors.  Monopolies became so big in the 19th century that their power facilitated social unrest.  Antitrust laws were made to break up monopolies, which were effective when used, but were rarely used due to political power of the monopolies, or the laws ineffectiveness.  What is needed is to update the antitrust laws for the new and different versions of monopoly power.  Antitrust laws give businesses and citizens more leverage.  Bringing with it competition, and overall better customer and social experience.

Trusts are a legal term for various companies transferring their shares to a single holding company.  The shareholders of the holding company receive a part of the earnings.  Trusts were used to eliminate competitors, use strategic pricing to make it hard to compete with, force products on consumers, and have more control over working conditions.  The elimination of competition by mergers gives the monopolists power.

Monopolies have a lot of power, so much that they could intimidate legislature.  With politicians self-censoring from fear of the monopolists.  As monopolies grow, so does their power.  Inability to check the increased power came about by being unprepared or inept, but also from arrangements being made between the monopolists and the politicians.

Going against monopolies has been a foundational tenant of America, as in the USA was founded by going against the monopoly of British power on colonial American decisions.  The American anti-monopolist agenda was in opposition to how British monopolies controlled what could be bought, from whom, and at what price.  Many of the monopolies came about through corruption and influence rather than merit.  Colonialist who tried to compete with the British monopolies, were fined or imprisoned.  When the economy got tough, rather than provide relief, the British government demand more profit to be sent their way.  The monopoly that precipitated the American Revolution was the British East India Company, which had come about from the Tax Act (later known as Tea Act).  The company would effectively prevent the colonists from buying tea from the Dutch, including the prevention of illegal tea smuggling.

During the 19th century, as the abuses from monopolies mounted, there were governors and legislatures that did try to rectify the situation, but the bills that passed Congress were watered down to prevent any effective change.  The more powerful and bigger the monopolies got, the greedier they became.  The public became so angry that they started to rebel against the monopolists.   It was local politicians who started to go against monopoly powers because it was their local small business and workers who were being hurt.  The politicians job depended on doing something against monopoly power.

When antitrust laws were put in, such as the Sherman Act, many courts favored the monopolist’s business interests than the social interests.  It was during the Roosevelt era that antitrust laws took effect.  Roosevelt’s socioeconomic background allowed him to understand what trusts meant for the various classes.  Roosevelt recognized that trusts damaged business and government interests as they resulted in riots and social upheaval.  Business and governments would have social trust built by reducing the power of those who had too much, because it would reduce the risk of riots and strikes.  There was mixed efficacy of antitrust during the Roosevelt and Taft administration.  The industries targeted by them were selective.  Favored industries received favored interests, which left many powerful industrialists with a lot of power.  Nixon would use antitrust legislature to attack political enemies, rather than on merits.

What caused antitrust laws to be less effective was the situation during the times, as other social factors took precedence.  Ideology about the laws also reduced its effectiveness.  The way in which the antitrust laws such as Sherman Act and Clayton Act are written do not make it easy to facilitate antitrust decisions.

Large and powerful companies are too big to succeed as they threaten innovation and harm consumer choice.  What is needed is to update antitrust laws, as they are the leverage that business and citizens would be able to use.  Citizens would get lower prices and more choice.  Businesses would not be squeezed out.

The initial third of the book is a wonderful account of the impact of antitrust laws and monopoly power.  During that part of the book, the author writes in a manner that explains how the laws help everyone, and the threats monopoly power has.  Brings with it various perspectives from seemingly different political backgrounds and creates a shared understanding of the problem.  After that, the book because very political.  More about political attacks than the merits of the decisions.  References how the opposing political party has done a lot of damage to competition by not seeing antitrust laws favorably, but does not mention all the policies that the author’s political party has done to stop competition.  Rather than wanting competition on its own merits, the book is more about a politically favorable competition.  In terms of economics, although the author does provide a little bit about why some monopoly practices might be favorable, there is no discussion about why government sometimes support oligopolies and monopolies for the benefits they provide.  Benefits not to the shareholders, but for the communities and citizens they support.  The only trusts and monopolies that are discussed are those which have done a lot of harm to the interest of the citizens and competitors, but not about the basic economic reasons in which size can be more efficacious.