Review of Greek Mythology: Captivating Stories of the Ancient Olympians and Titans by Ross Tanner

Book can be found in:
Genre = Sociology, Mythology and Religion
Intriguing Connections = Get To Know This Worlds' People, Regions, Cities, Nations, and Empires  (Greece) 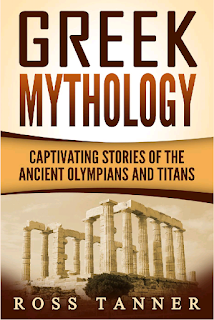 Myths might be fabricated and exaggerated, but they can hold some hints of reality.  Some events may have taken place, but symbolized in a way that humans could express.  For the Greeks, the myths served not just entertainment, but for ethical purposes.  The stories depended on the leader’s motivation, to either justify action or teach lessons about the varieties of results that come from intentions.  As for the myths themselves, when there were fewer gods, there was more peace.  The more gods brought into existence, the more conflict there became.  From the primordial gods, to the second generation Titan gods, to the third generation Olympian gods.  Going from being represented by abstract ideas, to each generation becoming more anthropogenic.

This is a short book about the Greek gods.  Which includes their linage, as the relationships between the gods is disclosed.  Describing what the gods represented, and the potential real expressions of their symbolisms.  Given the brevity, it is hard to understand the complexities of their interactions and loyalties.  Partly because different sources have different claims to events and actions.  Much like the author claims, to understand the myths more fully will require other sources.