Review of Post-Ottoman Coexistence: Sharing Space in the Shadow of Conflict edited by Rebecca Bryant

Book can be found in:
Genre = Sociology
Intriguing Connections = Get To Know This Worlds' People, Regions, Cities, Nations, and Empires  (Turkey) 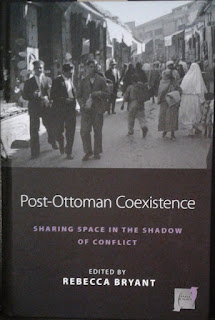 Shared spaces are those in which different faith and ethnic groups come together to work, worship, rejoice, and connect.  Coexistence obtains special meaning when it is lost.  Its loss is felt deeply, but evanescent during existence.  Events that make history are not those which make coexistence as everyday life rarely leaves a record.  Coexistence is an uneventfulness from which much can be learned.  A culture in which everyone practices small acts of diplomacy.  Even under enormous tension, different people can come together.  Mistrust and hostility can come about by the rash actions of a few.

What was lost in deportations was the community, culture, and the deep bonds between people.  The home was not a completely private space, neighbors could easily stop by and drink coffee.  Keeping the doors open meant that the neighbors frequently interacted with each other, which facilitated the practice of moral exchange with everyday diplomacy.  Getting back to coexistence is made difficult by the narratives being told about the past as they silence many minority counter-narratives which threaten the hegemonic narrative.

Although the book uses a variety of means to show coexistence, there seems to a lack of convergence.  The lack of clarity about what time periods are being discussed to what the examples mean reduces the understanding of the topic.  There were parts of the book that were well written and bring with them meaning to coexistence, but a large part of the book is best understood by those who have personal experience with the topics, or have a decent understanding of the historic and contemporary related topics.