Review of Bad Blood: Secrets and Lies in a Silicon Valley Startup by John Carreyrou

Book can be found in:
Genre = Economics, Business
Intriguing Connections = 1) When Intelligence Goes Wrong, 2) How To and Not To Run a Business, 3) The Entrepreneurial Spirit, 4) How Does Technology Modify Society? 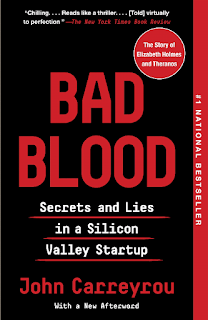 This is a story of ambition gone wrong.  Theranos founder Elizabeth Holmes patented an ingenious device which was meant to perform a multitude of blood tests all in a small device while using a small amount of blood.  The problem, there was so many technology and medical problems that made the device ineffective.  Worse, touting the device as accurate and practical caused many people to be harmed by getting unnecessary and wrong treatments that were indicated as needed from the results obtained from the Theranos device.  Theranos was able to keep its operations going by deceiving investors and regulators alike.  A culture of fear was its management style, and silencing anyone who questioned the reality of the technology.  Along the way, showcasing what investigatory reporting is all about.

A few drops of blood from the finger was all that was needed to be used in the Theranos technology.  The reader would send the data to Theranos, which would analyze the data and send a report to a medical profession.  The whole process was supposed to be done quickly, which would allow patients to alter their medications usage based on the results from the Theranos technology.

Part of the problem with the technology was that to use only a small amount of blood required diluting the blood to get more volume.  Some dilution can be helpful, but to get enough liquid for the reader to work required diluting the blood sample even more, which reduced the ability to measure the blood precisely.  The engineers and biologists working on the product wanted to use more blood, but even a little bit more was not allowed.   Many of the tests that were needed to be done were incompatible.  As in, using the blood for a particular test meant there was not enough for other tests.  The technology to use the tests themselves were very bulky, which made them hard to miniaturize it.  Even with miniaturizing problems, Holmes then requested even more tests that the technology needed to be able to run.  What mattered to Holmes was the size of the machine, rather than if the machine worked.

As the technology was nor reliable, to show during investor demonstrations, the results were used from a test when the technology worked.  Making the technology appear to always work.  Sending data after the ‘outliers’ were deleted.  When doing a sales pitch, there were many claims being made about the product working in various locations, military operations, and supported by medical institutions.  Even if no partnership was formed between another firm, that supposed partnership was used to support the companies claim.  For many investors and partnerships, this was a technology that was too good to pass up.  Some people believed in Holmes for the health implications.  For others, it was Holmes’s charisma that swayed many important people to her side.

There were investors and advisors to partnerships who had wanted to test Theranos technology by doing comparative analysis, and who had asked the appropriate questions.  Most of these people were given a hard time by the decision makers who were enamored in Holmes and believed the claims.  The few times that the Theranos technology got tested indicated that the technology was not as stated as the technology still required needles, it took weeks to get the results, many of the tests were outsourced, and that the tests that were not outsourced were so suspicious that people got completely different results when getting retested by other companies.

Many people either wanted to be part of Theranos or were taken in by the vision presented.  Most people did not last long in the company.  There was a high turnover rate which involved every position and rank.  Anyone who questioned the technology were either fired or made their life difficult.  To be at the company required absolute loyalty and optimism towards the company.  Dishonestly became a prerequisite.  There were employees who could no longer be party to the ethical and moral misconduct, left the company.  Leaving who were unscrupulous, or who did not have much choice.  Life got even more strenuous for employees with the hiring of Ramesh "Sunny" Balwani, Holmes’s romantic partner.  It was Sunny who started to fire people, but he also bullied employees.  Holmes had effectively created an echo chamber around her.  Cutting herself of from reality while only engaging those that were a bad influence.

Management practices involved compartmentalized information between departments which made communicating the problems and potential solutions difficult.  High confidentiality was required in the company.  Everyone was under constant surveillance as all electronic actions were tracked.  Former employees were frequently being sued or threaten by a perceived threat to Theranos hype.

One problem that had occurred to the company was due to a family friend.  Richard Fuisz took great lengths to get even with people from whom he perceived offended him, no matter how slight.  Fuisz helped the Holmes out before, so took offence to Elizabeth not asking him advice about the company.  To get revenge, he acquired a patent that Theranos would need later.  Fuisz pride and vanity caused him to try to take down the company.  In an ironic turn of events, Theranos sued Fuisz for something that could not be proven but Fuisz was not willing to pay for the legal fees anymore.  But, it was Fuisz which made contact with a science blogger who made contact with a journalist, the author of the book, John Carreyrou.  It was Carreyrou’s investigation which made salient the problems with Theranos technology.  Theranos lawyers tried to put an end to the investigation, but fortunately they were not successful.

Over hyping technology is not new to Theranos, it is the culture of Silicon Valley.  The problem with Theranos over hyping was that the technology impacted health, rather than just creating a frustrating mood when the technology did not work.

The book is generally well written but with too much time spent discussing the company culture of firing employees.  They were used to highlight the reasons for company problems, but the way it was written did not add much value as the situations became repetitive.  The main problem with this book is that the author only express’s directly the views of people who were critical of Theranos, while discussing those who supported Theranos indirectly and usually from a more general perspective.  Showcasing the thoughts of those who supported the Theranos would have been a valuable addition as it would have provided more credibility when discussing their beliefs about Holmes and Theranos technology, but also would have provided guidance on how to avoid being seduced by false promises.